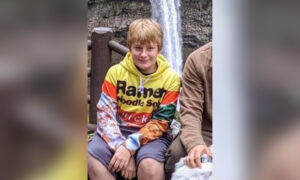 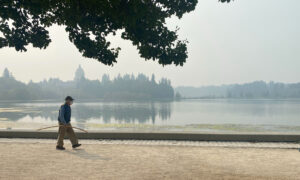 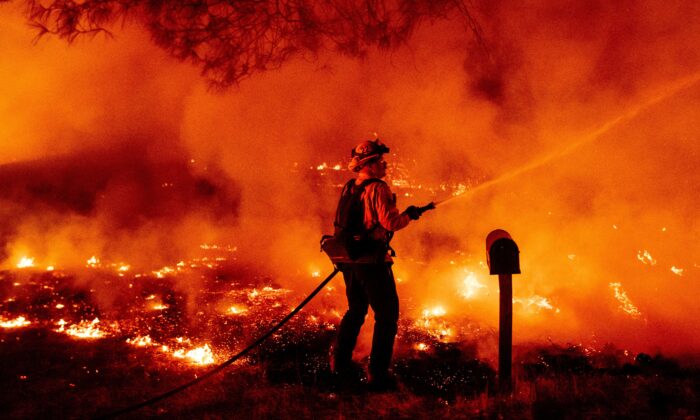 A Butte county firefighter douses flames at the Bear fire in Oroville, Calif., on Sept. 9, 2020. (Josh Edelson/AFP via Getty Images)
US News

Search on for Survivors as Wildfires Torch Millions of Acres, Trump to Visit California

Crews resumed searching for the dead and survivors on Sunday among blackened ruins left by massive wildfires raging in three western states, where millions of acres have burned in weeks and “mass fatality” incidents are feared in Oregon. President Donald Trump said he would travel to California to see the devastation first-hand.

A blitz of wildfires across Oregon, California, and Washington has destroyed thousands of homes and a half dozen small towns this summer, scorching a landscape the size of New Jersey and killing more than two dozen people since early August.

After four days of brutally hot, windy weather, the weekend brought calmer winds blowing inland from the Pacific Ocean, and cooler, moister conditions that helped crews make headway against blazes that had burned unchecked earlier in the week.

Still, emergency officials worried that the shifting weather might not bring much relief to southern Oregon, where an apocalyptic scene of charred residential subdivisions and trailer parks stretched for miles along Highway 99 south of Medford through the neighboring communities of Phoenix and Talent.

“We’re concerned that the incoming front is not going to provide a lot of rain here in the Medford region and it’s going to bring increased winds,” Bureau of Land Management spokesman Kyle Sullivan told Reuters in a telephone interview on Sunday.

Oregon Governor Kate Brown called the perilous blazes a “once-in-a-generation event,” and the director of Oregon’s office of emergency management, Andrew Phelps, said authorities were bracing for the possibility of “mass fatality” incidents.

At least ten people have been killed in Oregon, according to the office of emergency management. Brown has said that dozens of people remained missing across three counties.

“There are going to be a number of fatalities, folks that just couldn’t get warning in time and couldn’t evacuate their homes and get to safety,” Phelps told MSNBC on Friday.

There were 38 active fires burning in Oregon as of Sunday morning, according to the state’s office of emergency management website.

In California, tens of thousands of firefighters were battling 28 major wildfires as of Saturday afternoon, according to the California Department of Forestry and Fire Protection. Improving weather conditions had helped them gain a measure of containment over most of the blazes.

The White House said Trump will meet with federal and California officials on Monday. The president has said that western governors bear some of the blame for intense fire seasons in recent years, accusing them of poor forest management.

More than 4,000 homes and other structures have been incinerated in California alone over the past three weeks. Three million acres of land have been burned in the state, according to the state’s Department of Forestry and Fire Protection.

Thick smoke and ash from the fires has darkened the sky over the Pacific Northwest since Labor Day, creating some of the world’s worst air-quality levels and driving residents indoors.

In Portland, where more than 100 days of protests have turned increasingly tense in recent weeks, the Multnomah County Sheriff chastised residents for setting up their own checkpoints to stop cars after conspiracy theories spread on social media that members of Black Lives Matter or Antifa were lighting fires. Local officials have called those assertions groundless.

Facebook said on Saturday it was now removing false claims that the wildfires in Oregon were started by certain groups.

“This is based on confirmation from law enforcement that these rumors are forcing local fire and police agencies to divert resources from fighting the fires and protecting the public,” a Facebook spokesman said.

By Deborah Bloom and Adrees Latif