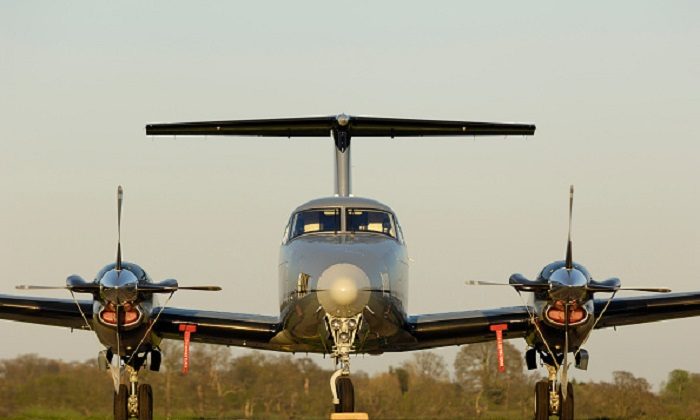 ANCHORAGE, Alaska—An air ambulance with three people aboard that vanished in Alaska was presumed to have crashed and the owners said on Jan. 31 that they will look for the bodies of the crew.

After an air and sea search of hundreds of square miles, the Coast Guard announced it was suspending the search for the twin-engine King Air 200, which went missing Tuesday while heading to the tiny community of Kake to pick up a patient.

“This was an extensive search effort in some very challenging conditions,” said Coast Guard Capt. Stephen White in a statement. “Suspending a search for any reason is one of the most difficult decisions we have to make.”

#UPDATE– the #CoastGuard announces the suspension of the search for an overdue aircraft with 3 people aboard near Kake, AK. The search was suspended at 5:30pm Thursday. Multiple #USCG assets searched more than 63 hours. Read more: https://t.co/XdUthTARTN

A wing part and other aircraft debris were found near the plane’s last known position.

The debris was found in the water near the south tip of Admiralty Island about 22 miles west of the tiny southeast Alaska village of Kake.

Guardian Flight, the medical flight company that owns the plane, announced late Thursday that it will try to recover the bodies of the missing: pilot Patrick Coyle, 63; flight nurse Stacie Rae Morse, 30, and 43-year-old Margaret Langston, the flight paramedic.

All were based in Juneau.

“Our hearts are heavy, and we respectfully offer our deepest thoughts and prayers to our lost employees and their families,” Randy Lyman, a company vice president, said in a statement.

The King Air 200 twin-engine plane took off from Anchorage on Tuesday and was expected to land in Kake at 6:19 p.m. to pick up a patient, but it never arrived, the Coast Guard said.

Federal accident investigators on Wednesday were reviewing radar flight information received from the plane, but no clues to what happened to the plane were immediately found in the search of data showing the plane’s flight pattern, said Clint Johnson, chief of the National Transportation Safety Board in Alaska.

“We don’t even know for sure that we have an accident,” he said.

The Coast Guard said no electronic locating transmitter signal has been activated from the missing plane.

When the plane failed to arrive in Kake, residents in a dozen boats went out Tuesday night to search, and some went back out Wednesday, City Administrator Rudy Bean said.

The search by boats, ferries, and aircraft was focused on an area of sea about 20 miles west of Kake, Hengen said.

#AirTindi #YellowKnife – Canada – Search and rescue teams have arrived at the wreckage of an Beech King Air 200 aircraft missing since Wednesday morning. Neither of the two pilots on board are believed to have survived, RCMP said. @AviationSafety https://t.co/CB8ukrhoqo

The Utah-based company initially grounded all of its 85 aircraft across the U.S. as a show of respect for the missing. It gradually re-started operations with aircraft based outside of Alaska.

“That really gave our employees time to reflect on what’s happened to the missing crewmembers and to pray,” Gregory said.

Light rain, 7 mph winds and 10-mile visibility were reported in the area around the time the plane was due in Kake, Hengen said.

The Kake clinic did not immediately respond to a telephone message seeking information about the patient who was supposed to be picked up by the plane.