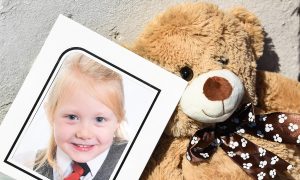 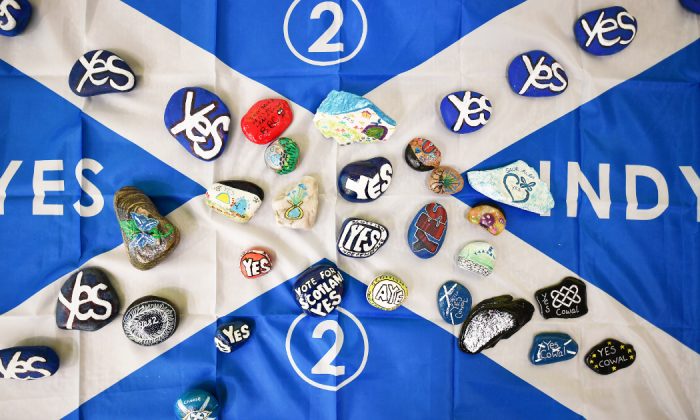 A Saltire flag has painted stones placed on it as delegates attend day one of the SNP Spring Conference at the Edinburgh International Conference Centre on April 27, 2019 in Edinburgh, Scotland. (Jeff J Mitchell/Getty Images)
International

Excluding those who said they did not know or would not vote, this amounted to 52 percent to 48 percent for an independent Scotland.

“I found a small majority in favor of a new vote–and the first lead for an independent Scotland for more than two years,” Ashcroft, a Conservative who opposed Boris Johnson’s successful bid to be prime minister, said.

Johnson, who took over from Theresa May last month and is unpopular in Scotland, was booed as he entered a meeting last week with Scottish First Minister Nicola Sturgeon who is demanding London agree to another referendum.

The poll is the first lead for Scottish independence in a published poll since an Ipsos MORI survey in March 2017, and the biggest lead since a spate of polls in June 2016, shortly after the EU referendum, Ashcroft said.

If there was another referendum and if Scots voted out, it would mark the biggest shock to the United Kingdom since Irish independence a century ago—just as London grapples with the fallout of a possible no-deal Brexit.

Scots rejected independence by 55 to 45 percent in a 2014 referendum but a three-year political crisis in London and differences over Brexit have strained the bonds that tie the United Kingdom together.

The United Kingdom as whole voted 52–48 to leave the EU in a 2016 referendum: England and Wales voted to leave but Scotland and Northern Ireland voted to stay.

Irish nationalists have demanded moves towards Irish unification in response to Johnson’s threat of a no-deal Brexit.

The nations of Britain have shared the same monarch since James VI of Scotland became James I of England in 1603 and a formal union created the Kingdom of Great Britain in 1707.

A majority of Scottish voters up to the age of 49 said they would vote for independence, including 62 percent of those aged 18 to 24, Ashcroft said.