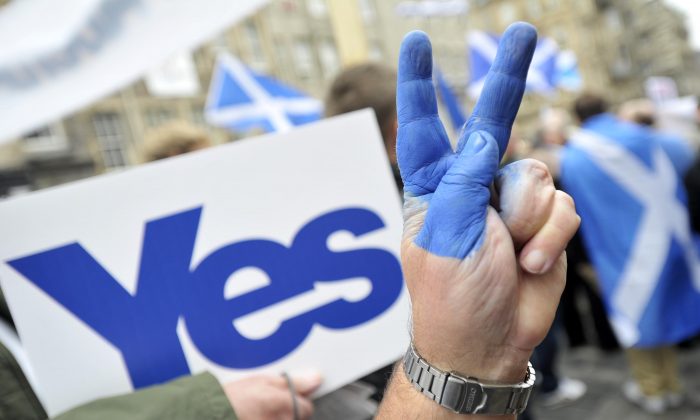 A pro-independence supporter flashes the victory sign as people gather in Edinburgh, Scotland, on Sept. 21, 2013, for a march and rally in support of a “yes” vote in the Scottish Referendum to be held on Sept. 18, 2014. (Andy Buchanan/AFP/Getty Images)
Asia & Pacific

In the next week there will be a referendum in Scotland to decide whether Scotland should become an independent country; polls currently show a very close race, with NO to independence slightly ahead. A general election will also be held in New Zealand, where the center-right Nationals are likely to win a third term in office.

The Scotland referendum will be held on Thursday 18 September, with polls closing at 10pm U.K. time (7am Friday Australian Eastern). If the result is clear, it should be known sometime on Friday afternoon Aus time.

The desire of many Scots to become independent seems to be due to antipathy to Margaret Thatcher’s Prime Ministership. Antony Green has a long post about the background to the current referendum, and the Tory vote in Scotland fell dramatically during Thatcher’s years. This trend against the Tories has continued, and they held zero Scotland seats after the 1997 election, and won only one seat at the 2001, 2005 and 2010 elections. In the 2010 election, Scotland’s result meant that the Tories failed to win a majority of U.K. seats, leading to the current Tory—Lib Dem coalition government. In Scotland, the Tories have fallen to fourth place behind Labour, the Lib Dems and the Scottish Nationalists.

Polling in the lead up to the referendum has clearly favoured the NO side until recently. The largest shifts have come from polls that previously leaned towards NO. A YouGov poll in early August put NO ahead by 61-39, but there were four-point shifts towards YES in each of the next three YouGov polls to put the YES side ahead 51-49 in a poll conducted in early September—the first YES lead any poll had shown. Last Friday’s YouGov had NO back in front by a narrow 52-48 margin.

On the other hand, two polls that have always seen a much closer race than YouGov were unchanged recently; both Survation and Panelbase were showing NO leads of 53-47 and 52-48 respectively. It appears that the referendum was always closer than YouGov and other polls stated, but now the polls that previously leaned towards NO have corrected; these polls have seen dramatic swings, while polls which were YES-favorable have seen none or little change.

Overnight, four polls have been released. Three of them have NO leading by between 54-46 and 51-49, but one has YES leading by 54-46. That big YES poll used a sample of only 700, and is likely to be an outlier. A good rule to follow with polls is that if one poll has a major disagreement with the other polls, that poll is far more likely to be wrong than the others. The Poll Bludger is now using BludgerTrack to follow the Scottish referendum polls, and currently has NO ahead by 51.4-48.6.

The NO campaign is still marginally ahead, and is more likely to prevail next Thursday, but this contest has become much closer than could have been predicted even two weeks ago.

If Scotland becomes an independent country, it would hurt Labour’s chances of winning U.K. general elections. As noted before, without Scotland, the Tories would have won a majority of seats in their own right at the 2010 U.K. election.

The New Zealand election will be held on Saturday, Sept. 20, with polls closing at 7pm NZ time (5pm Aus eastern). Preliminary results will be published through Saturday night.

However, NZ uses mixed member proportional (MMP) representation. Under MMP, a party must either win a single member electorate, or win at least 5 percent of the overall vote, to qualify for a proportional allocation of parliamentary seats. Electors are given two votes, one for their electorate and one for their party. It is the party vote, not the electorate vote, that decides how seats will be distributed.

The NZ parliament has 120 seats awarded by proportional representation based on the party vote. Parties that win a large proportion of single member seats are penalized by not getting many party list seats. A peculiarity of the system is the “overhang”; this occurs when a party wins more single member seats than it deserves based on its party vote. In such a case, the party is allowed to keep its extra seats, and the size of Parliament is expanded. Owing to this, the Parliament following the 2011 election had 121 seats.

The Curiablog NZ poll aggregate currently has National on 48.6 percent, Labour on 25.6 percent, the Greens on 12.8 percent, NZ First on 5.8 percent and the Conservatives on 3.5 percent. A Parliament of 123 is anticipated, with the assumption that the Maori and Manu parties will win more seats than they deserve proportionally. National is apparently giving its allies ACT and United Future free conservative single member electorates.

The center-right coalition is National, United Future and ACT. The center left is Labour, the Greens and Mana. National could be hurt if the Conservatives fail to reach 5 percent, as these right wing votes would then be wasted. The current projection is that the center-right coalition will just have a bare majority, with 62 of 123 seats, well ahead of the center-left’s 51. It would only take a one seat switch for the center-right to lose majority status, so it is closer than it looks. Nevertheless, John Key is likely to be re-elected to a third term as New Zealand’s Prime Minister.