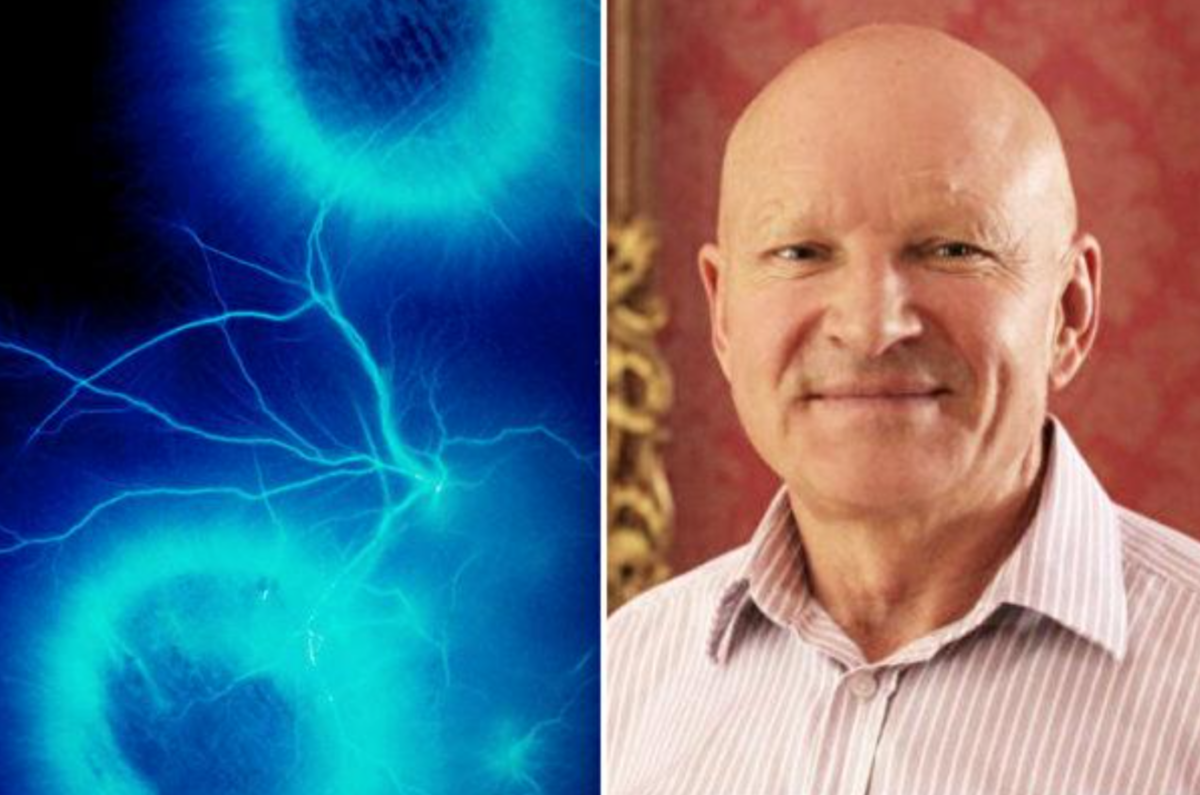 Your Emotions Affect Your Cells on an Electromagnetic Level, Here’s How

An interview with Russian physicist and professor Konstantin Korotkov
BY Health 1+1 TIMEJune 27, 2022 PRINT

The human body can emit a glow that is invisible to the naked eye.

When you touch your sweetheart’s fingers, the glow from all fingertips of both of you will create a splendid connection resembling lightning. When you say “I love you” to your intimate partner, a mass of material energy is released from your chest and flies towards the other person–this sounds like a fantasy movie scene, but it is a real physical phenomenon.

Over the past several decades, the study of human energy has developed to an astonishing degree.

Health 1+1 interviewed Professor Konstantin Korotkov, a Russian quantum physicist and inventor of the Gas Discharge Visualization technology, to explore the human body’s energy fields and the factors that affect human energy from a scientific perspective.

Professor Konstantin Korotkov is a Russian quantum physicist, who worked on plasma physics, space physics, and laser physics in the former Soviet Union. At that time, the bioenergetics community was quite active, and he met some “very interesting people,” who were able to alter the energy fields of the human body, he said. He watched these people improve the health of his wife and friends by sending “thought messages” to them. This intrigued Korotkov, who had always been studying physics. With the inquisitiveness and rigor of a scientist, he began consulting various books and literature on human energy fields.

After learning more about it, Korotkov came to the conclusion that although the topic of “human energy” wouldn’t be accepted by most people in the short term, it would eventually be recognized by the scientific community.

Therefore, he began to gradually shift his research to the field of human energy. At that time, the former Soviet Union was collapsing, and the entire Russian scientific community was in turmoil. He left the research laboratory to instead start a business. However, soon after, he decided to come back and resume his research on energy.

It has now been nearly a century since Semyon Kirlian and his wife discovered a technique called “Kirlian photography.” This is a photographic technique that captures the energy emitted by the human body.

The original invention of Kirlian photography was sometimes unreliable, so it was not accepted by the scientific community, which demanded “constant effectiveness.” In 1995, Korotkov and his team invented the first digital Kirlian photography, Gas Discharge Visualization (GDV), by using the most advanced technology available at the time.

GDV photography can observe the photon energy emitted by the human body, as well as the changes of the human energy field in different states. As the research became more and more advanced, Korotkov deeply felt that energy research would bring great benefits and understandings to human society.

Today, the science of consciousness is an important part of Western scientific research. The term “consciousness” refers to a person’s perception of the external world and his or her own thoughts and emotions.

Korotkov has discovered that people’s mental and emotional states can influence their body’s energy field.

Through the GDV photography, we can observe the changes in the energy field of the human body when people are in different moods. For example, when a person emits positive emotions, such as happiness, his or her energy field will be enhanced. In 2017, Korotkov participated in an experiment in Mexico to measure the effect of watching comedy on the human energy fields. The results showed that when the participants watched a comedy movie, everyone’s energy field was enhanced.

“Love is the strongest human emotion,” said Korotkov. The axiom has proven to hold up to energy imaging as well.

This emotion can have a great impact on the bodies of two people in love, as the GDV imaging has shown.

Korotkov used two different experimental methods to observe the interactions between the energy fields of two people who love each other.

In another approach, he used the GDV system to generate and observe the electronic images of the participants’ whole body energy fields. In the experiment, when a person expressed love to another person, a clear mass of energy could be seen in the image, flying from the heart of the person showing love to the heart of the other person.

Korotkov explained that this “energy transfer” is not imaginary, but a real transfer of “matter energy cluster.” This energy cluster contains electrons, photons, infrasound waves and many other forms of energy matter. This is why when a person is sick, if their partner is there to provide support and company, their illness will be cured faster.

Korotkov has discovered that people can sense “the person behind” them.

In one experiment, the researcher sat a participant in a chair and had another person approach from behind him, while observing the reaction of the person in the seat during the process. The results showed that when a stranger approached from behind, in most cases, the energy field of the person in the seat did not change. However, when their family members and loved ones approached from behind, their energy fields were immediately enhanced.

Korotkov said that this is due to the interaction of the energy fields between people. He explained, “When we emit an energy field, it’s not that we will have nothing else to do with it. Through this energy field, we touch and sense our surroundings.” He believes that this is part of human “intuition.”

Since ancient times, people had the ability to sense tensions, to feel changes in the climate and environment, and to sense people around them.

“However, nowadays, this ability has degenerated, and people are not as sensitive to the environment as they were in the past,” Korotkov said. “However, our subconscious brain still responds to our surroundings, as proven by the GDV photography through real experiments.”

Korotkov also studied the effect of the external environment and things on the human body’s energy, including water, food, different materials, and music.

“The effect of music on the human body is enormous,” Korotkov said.

In 2014, the N.N. Petrov National Medical Research Center of Oncology and the Russian Scientific Center of Radiology and Surgical Technologies jointly conducted a large study comparing the average life expectancy of people in different creative professions. The study surveyed 49,000 individuals representing the fields of visual arts, music, literature, and academia. The results showed that the profession with the lowest average life expectancy for both men and women was rock musicians, at 43.6 years for men and 37.6 years for women.

Why does this phenomenon occur? It inspired Korotkov to study the effect of different genres of music on the human body through experiments.

He found that when a person listens to rock music, his or her energy field rises briefly to a peak, and it then begins to decline to a value below the starting point. According to Korotkov, the time of the initial rise in energy varies according to age and the degree of enjoyment of the music, but in any case, it inevitably drops.

On the contrary, classical music had a positive effect on one’s energy field and other studies have shown that it can bring an improvement one’s health. Professor Korotkov speculates that this may be because the frequency of classical music is somehow compatible with the frequency of human brain waves, and therefore it has a positive effect on the human body.

The Potential of Energy Research

Nowadays, more and more people are suffering from various problems and illnesses. The more doctors they consult, the more “diseases” they end up having, and the more types of drugs they are prescribed. These different drugs clash with each other in the body, causing the internal environment to deteriorate.

He applied the theory of “human meridians” in traditional Chinese medicine to GDV photography and developed a system for measuring and analyzing human energy. He measured the light emitted from the 10 fingers, as they are the most sensitive and easy-to-measure parts of the human body. According to the concept of meridians, different fingers are connected to different organ systems in the body, and the GDV camera takes pictures of the light emitted from the fingers, converts them into data related to the physical properties of the human body, and uses these energy data to evaluate the internal energy of different organ systems, as well as the body’s overall energy status.

Korotkov believes that through this kind of observation, people can stay in a healthy state, detect problems (and even potential ones) in their body early, and improve these problems by focusing on the nature of the problems.

This is just like the philosophy of traditional Chinese medicine, which aims to keep one’s body in a healthy state, rather than treating illnesses after they appear, as in conventional medicine. Professor Korotkov emphasized that he is not opposed to Western medicine; his wife and many of his friends are doctors. He just believes in “combining the concepts of traditional Chinese and Western medicines” to achieve better results.

Teleportation of the Mind

Korotkov also conducted many other important experiments, such as the “teleportation” experiment. He found that the human mind can have an effect on other people, and even sensors, at a distance. When a person in one city sent forth a thought to a sensor in another city, or even on the other side of the world, the sensor could pick it up and respond.

“This phenomenon probably can only be explained at the quantum level, and it can only be hypothesized at this stage,” Korotkov said. “We already have some ideas, but we need more experiments to prove the cause of this phenomenon.”

The Scientific Community Is Slow to Change

Research on human consciousness and energy has been prevalent since the last century, and new discoveries have been made. However, these studies have not been generally recognized and accepted by the scientific community. When asked about the reason, Korotkov said, “It’s a long story. When scientists have become accustomed to a certain viewpoint or idea, they will work on that ‘known idea’. Whenever there is a new understanding, it takes time for people to accept it. However, science is constantly evolving, and we should think in terms of development to understand nature.”

For instance, many doctors do not accept the philosophy of traditional Chinese medicine and see its concepts as “superstition.” Those who delve deeper into its study come to understand and appreciate it, but the average doctor would not have the time or inclination. They may be convinced that human beings only have a physical body and are unwilling to believe in the existence of consciousness and soul, a concept that prevents them from gaining further understanding.

“Although this phenomenon is still not generally accepted by the medical community, I’m not worried about it,” Korotkov said, “because the day is coming, and even though it’s making progress step-by-step, it’s coming.”