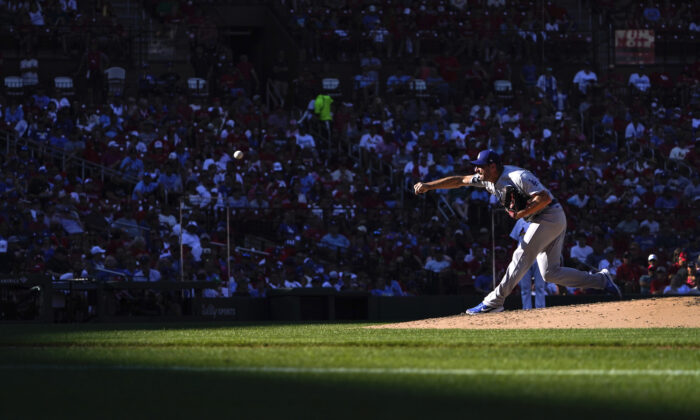 Scherzer Undefeated as Starting Pitcher for the Dodgers

Los Angeles Dodgers’ Max Scherzer dominated the St. Louis Cardinals on Sept. 6 in the opener of a 4-game series at St. Louis with a 5-1 victory.

His record is a perfect 7-0 as starting pitcher since joining the Dodgers in a high-profile trade with Washington at the trade deadline.

Scherzer overwhelmed the Cardinals in his hometown of St. Louis with 13 strikeouts. He allowed six hits in eight innings with one unearned run, continuing the trend towards his potential fourth Cy Young award.

The Dodgers jumped out to an early 4-0 lead in the first inning against Miles Mikolas, the Cardinals’ right-hander pitcher. Mikolas, whose record is 0-2, gave up four earned runs and five hits in five innings.

The first inning’s dominance began with Trea Turner hitting a double to left center field. Max Muncy followed with a single to right field, moving Turner to third. Mookie Betts then singled to left scoring Turner. Justin Turner grounded into a double play and was able to allow Muncy to score. Corey Seager then walked, followed by a Chris Taylor home run.

The win was sorely needed, since Los Angeles had just lost two out of a three-game series for the divisional race against their biggest rival, the San Francisco Giants. The Giants also won on Monday against the Colorado Rockies, leaving the Dodgers one game behind.

Three more games are scheduled through Thursday against St. Louis. The Dodgers will return home Friday to host the San Diego Padres in a 3-game weekend series, as the regular season draws closer to completion.