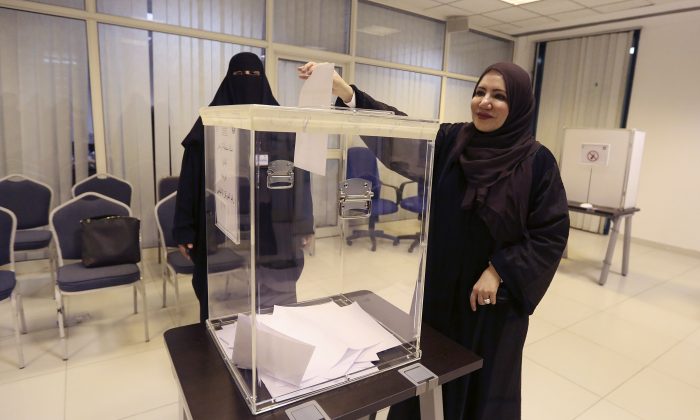 Saudi women vote at a polling center during the country's municipal elections in Riyadh, Saudi Arabia, Saturday, Dec. 12, 2015. Saudi women are heading to polling stations across the kingdom on Saturday, both as voters and candidates for the first time in this landmark election. (AP Photo/Aya Batrawy)
Middle East

Saudi Women Vote for the First Time in Landmark Election

RIYADH, Saudi Arabia—Women across Saudi Arabia marked a historic milestone on Saturday, both voting and running as candidates in government elections for the first time, but just outside polling stations they waited for male drivers—a reminder of the limitations still firmly in place.

The landmark election for local council seats was not expected to immediately advance the status of women in Saudi Arabia, who are still not permitted to drive, but it seen as a chance for them to make their voices heard as citizens.

“We are making history. I just made history,” said candidate Karima Bokhary, 50, after casting her ballot at a polling station in the capital Riyadh.

Bokhary was one of 979 women candidates vying for a seat on the country’s municipal councils, the only government body in which Saudi citizens can elect their representatives. An additional 5,968 male candidates were running in the election, with no quotas on the number of female candidates.

Results were expected to be reported on Sunday.

More than 130,000 women registered to vote, compared to 1.35 million men. The General Election Commission estimated there are at least 5 million eligible voters out of a population of 20 million, but the figure could be much higher.

At the King Salman Social Center in Riyadh, Shara Al-Qahtani, a 50-year-old mother of eight, wearing a loose black dress known as an abaya that all women must wear in public and a traditional veil covering her face and hair, said women being allowed to vote “is good for people and good for society … Women are partners of men.”

Though women make up just 10 percent of registered voters, the right to simply cast a ballot sends a wider message to society, she said.

“If you look back at the history of women (in Islam), there are so many strong women,” she said. “The Prophet (Muhammad) worked for his wife Khadija. The prophet’s wife was his boss technically.”

The election tested just how far the kingdom’s conservatives were willing to bend while bringing to the fore more liberal voices advocating for greater freedoms and reforms.

In line with Saudi Arabia’s strict gender segregation rules, men and women cast ballots at separate polling stations. During the campaign period, female candidates could not directly address male voters and had to either present their platforms from behind a partition, relying on projectors and microphones, or through male supporters and relatives presenting for them.

The candidates were vying for about 2,100 council seats. An additional 1,050 seats are appointed with approval from King Salman, who could use his powers to appoint female candidates who don’t win outright. The candidates serve four-year terms that begin on Jan. 1.

While the municipal councils do not have legislative powers, they oversee a range of community issues, such as budgets for maintaining and improving public facilities. All major decision-making powers rest solely in the hands of King Salman and the all-male Cabinet of ministers.

The first local council election since the 1960s to be held in Saudi Arabia was in 2005 and the second in 2011, with only men taking part.

The late King Abdullah granted women the right to participate in elections before he died in January. He also appointed 30 women to the country’s top advisory Shura Council, which laid the groundwork for women to take part in municipal councils.

Few clerics have dared to openly criticize the royal decree to allow women the right to vote, and in mosques across the kingdom Friday, there were few mentions of the election in sermons.

Despite women’s participation in the vote, however, there’s a widely held sentiment among many Saudis that women do not belong in public life.

Abdullah Al-Maiteb summed it up as he made his way into a polling station in Riyadh. “Her role is not in such places. Her role is at home managing the house and raising a new generation,” he said. “If we allow her out of the house to do such business, who is going to take care of my sons?”

Amna Ahmed, a 23-year-old Quran teacher, didn’t bother to register to vote because she too believes Saudi women have no place in government.

“The rulers are male and usually make the decisions so we’re not used to women making decisions,” she said. “We prefer men to win.”

Karen Young, a senior resident scholar at the Arab Gulf States Institute in Washington DC, says the success rate of women in the Saudi municipal elections “will be slim to zero.”

“There is not a clear understanding of what the value of representation can be within the current political system, though there are many activists who are committed to continuing this opening and trying to expand it inch by inch,” she said.

Many Saudi women activists say more important than the right to vote is the easing of Saudi’s restrictive guardianship laws. Under such laws, women cannot obtain a passport, work in government, travel abroad or enter university without the permission of a male guardian, usually the father or husband.

Hatoon Al-Fassi, general coordinator for the grassroots Saudi Baladi Initiative that worked closely with women to raise voter awareness and increase female participation in the election, said the ultimate goal in this election wasn’t to win votes.

“It’s the right of being a citizen that I concentrate on and I consider this a turning point,” she said. “We are looking at it as an opportunity to exercise our right and to push for more.”