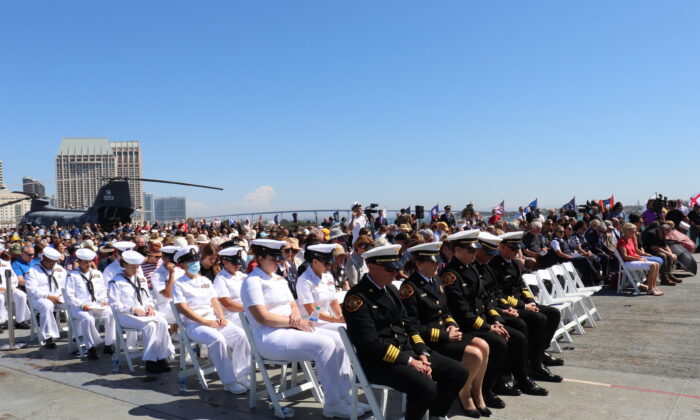 Around 1000 spectators gathered for the 20th anniversary of 9/11 at the USS Midway Museum in San Diego, on Sept. 11, 2021. (Tina Deng/The Epoch Times)
Southern California

Around 1000 spectators gathered at the USS Midway Museum in downtown San Diego on Sept. 11 to honor lives lost in the terrorist attacks 20 years ago.

Many people from the west coast attended the memorial ceremony to read the names of their deceased loved ones.

Don Forsyth, retired battalion chief of the Orange County Fire Authority, told The Epoch Times he lost some of his close friends on Sept. 11, 2001, and every year he would come to the ceremony at USS Midway to read his friends’ names and pay his respects.

When the devastating attacks happened, Forsyth was in Northern California managing a wildfire.

“We gathered around in a circle at the back of the fire engines out on the fire line and was watching somebody’s little two-inch by two-inch portable TV. When [one of the firefighters] saw the towers coming down and he disappeared for like 30 minutes … and he was over crying on the back of one of the fire engines … by himself. That’s when he informed us that his brother should have been at work in that building that he just watched,” said Forsyth.

“So we spent the whole rest of the day calling relatives, all 16 of us chipped in taking different phone numbers from him trying to locate his brother.”

Fortunately, his brother made it out alive.

Forsyth added that the 9/11 terrorist attacks brought the country together as one; however, in recent years the country has become more divided. “Twenty years later, we could use this same event again, to hopefully try and unite the country,” said Forsyth.

Other attendees of the event shared similar sentiments with Forsyth.

Patrick Schuller, a retired firefighter, attended the event with his wife Nikki Schuller to read the names of the fallen heroes.

“9/11 was a day that changed normalcy. We became a lot more aware and the country rallied behind ‘We Will Never Forget’,” Schuller told the Epoch Times.

Nikki Schuller said, “Days and months after 9/11, everybody cared about everybody, and everybody was worried and frightened and got together, no matter what, to support each other.”

She added, “People don’t remember that anymore. They forgot that we are all different but we can all get along.”

Several guest speakers from these organizations spoke at the event and paid tribute to the first responders and airline workers who lost their lives on 9/11.

San Diego Fire Department Chief Colin Stowell thanked people for passing along the memories of 9/11 and said it is important for today’s younger generation to learn what happened on that horrific morning. Stowell said active terrorism was meant to tear America apart but instead Americans came together as a stronger and more proud nation.

Rhys Hawkes and his wife brought their young children to the memorial ceremony. Hawkes said Americans should never forget the sacrifices the first responders have made. When asked how he would tell his children about the 9/11 attacks, Hawkes said they would eventually tell them about all the details. “The good, the bad, and the ugly—all of it,” said Hawkes.