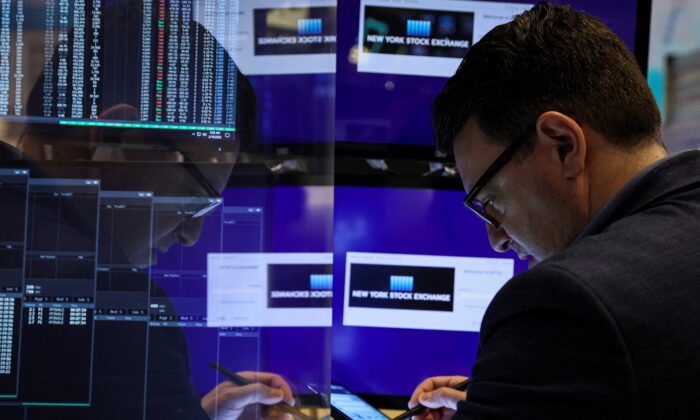 A trader works on the floor of the New York Stock Exchange (NYSE) in New York on Feb. 18, 2022. (Brendan McDermid/Reuters)
Markets

NEW YORK—Wall Street’s main indexes fell on Tuesday, with the S&P 500 confirming a correction, as the Ukraine-Russia crisis kept investors on edge after Russian President Vladimir Putin recognized two breakaway regions in the country and ordered troops to the area.

The S&P 500 ended down more than 10 percent from its Jan. 3 closing record high. A correction is confirmed when an index closes 10 percent or more below its record closing level.

Indexes pared losses and ended off their lows of the session after U.S. President Joe Biden announced the first wave of sanctions against Russia, while saying he was hopeful diplomacy is still available.

Biden added that the United States had no intention of fighting Russia. He said the sanctions, among others things, target Russian banks and sovereign debt.

“It finally gives all of this rhetoric, all of this strategy, some teeth. This is something to make the other side feel some pain and I think that’s appropriate,” said Jake Dollarhide, chief executive officer of Longbow Asset Management in Tulsa, Oklahoma.

Britain published a list of sanctions and Germany froze the Nord Stream 2 Baltic Sea gas pipeline project, which would have significantly increased the flow of Russian gas.

All major S&P 500 sector ended lower on the day, led by losses in cyclical sectors including consumer discretionary and energy.

The measures announced by Biden were not as harsh as some investors had feared, said Alan Lancz, president of Alan B. Lancz & Associates Inc, an investment advisory firm based in Toledo, Ohio.

But he said the effect is likely temporary given that the Ukraine-Russia crisis is not over.

The Dow and Nasdaq were each down more than 2 percent shortly before Biden spoke.

Shares of Home Depot Inc. dropped 8.9 percent after the home improvement chain reported a decline in gross profit margins for the holiday quarter due to a jump in transportation and labor costs.

Declining issues outnumbered advancing ones on the NYSE by a 3.79-to-1 ratio; on Nasdaq, a 2.90-to-1 ratio favored decliners.