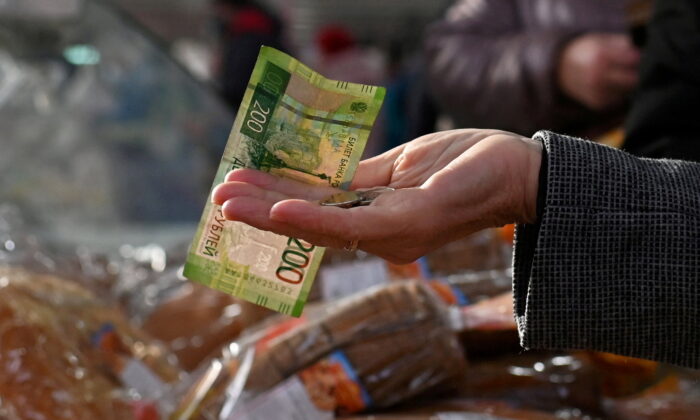 A customer hands over Russian ruble banknotes and coins to a vendor at a market in Omsk, Russia, on Oct. 29, 2021. (Reuters)
Stocks

The Russian ruble firmed against the dollar on Tuesday, while prices for OFZ government bonds rose to their highest since Feb. 21 on expectations that the central bank would soon cut interest rates again.

The ruble has fully recovered to levels seen before Feb. 24 when Russia sent tens of thousands of troops to Ukraine, triggering an unprecedented wave of western sanctions against Russia.

The ruble ended Moscow trading 1.6 percent firmer against the dollar at 78.52, its strongest level since April 11.

Against the euro, the ruble eased 0.5 percent to 84.10 after on Monday briefly touching its strongest level since April 8 of 82.60. On the bond market, where non-residents have not been allowed to sell paper since late February, yields on 10-year benchmark OFZ bonds fell to 10.25 percent, their lowest since Feb. 21, from around 11.6 percent seen a week ago. Yields move inversely with bond prices.

Central Bank Governor Elvira Nabiullina on Monday said the central bank should work on increasing the availability of credit for the economy, indicating that it would consider cutting its key rate from 17 percent at the next board meeting on April 29. Nabiullina also warned that the Russian economy “will enter a period of structural transformation” in the second and third quarters, which analysts said meant a deep and rapid economic contraction. In just two quarters, the Russian economy could shed all the gains it posted in 2012–2021, said Evgeny Suvorov, an economist at CentroCreditBank, predicting that the central bank would cut its key rate to 15 percent next week.

Russian stock indexes were down. The ruble-based MOEX Russian index fell 1.1 percent to 2,317.5 points, a level last seen on Feb. 25, before the central bank suspended stock market trading for nearly a month. The dollar-denominated RTS index climbed 0.6 percent higher to 931.86 after dropping to 885.44, its lowest since late March.

The central bank said on Tuesday that companies that are registered in Russia and have depositary receipts traded on foreign bourses must revoke them by May 5.