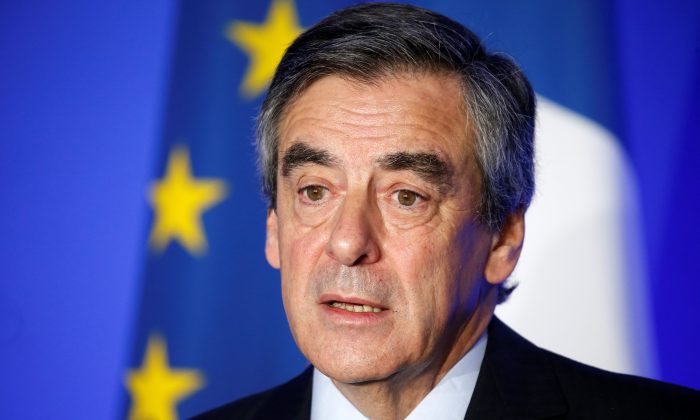 PARIS—France’s conservative presidential candidate on Friday dismissed as “fantasy” concerns that Russia could be interfering in the election and said he would seek a better balance in relations with a country that was nevertheless “dangerous”.

Francois Fillon, who had been favorite to win the election until a scandal over his wife’s work broke in January, has said European Union sanctions against Moscow are totally ineffective, creating a “cold war” climate that needs to be reversed.

The head of the U.S. Senate Intelligence Committee, which is investigating the Russian hacking of the 2016 U.S. presidential campaign, said on Wednesday that the Kremlin was trying to interfere in the French vote.

“We must avoid these fantasies,” Fillon told reporters as he outlined a defense program that would prioritize defeating “totalitarian Islam” and review France’s existing military operations overseas.

“There is enough unwelcome interference in this electoral campaign to not need to go and seek some in Russia. We’re sufficiently capable ourselves,” he said.

Fillon has said he is a victim of a plot from within France and has accused the French government of orchestrating his downfall.

He has been placed under judicial investigation on suspicion of embezzling state funds by paying his wife for work she may not have done. He denies any wrongdoing, but he has plunged far behind the leaders, centrist Emmanuel Macron and National Front leader Marine Le Pen, in opinion polls.

A daily opinion poll published by Opinionway on Friday put Macron and Le Pen neck-and-neck in the April 23 first-round vote on 24 percent with Fillon on 19 percent.

The Kremlin has repeatedly denied that it was behind media and internet attacks on the campaign of frontrunner Macron, who, contrary to Fillon, has suggested imposing new sanctions on Moscow should it not implement its side of a deal to resolve the crisis in Ukraine.

Fillon himself has come under fire from the left in France for advocating a softer tone toward Putin that contrasts with the Socialist government’s hard line on EU sanctions put in place over his annexation of Crimea and subsequent action in eastern Ukraine.

Repeatedly attacking 39 year-old Macron for his “inexperience” and “immaturity”, Fillon, a former prime minister, said Russia was not the biggest threat to France and should not be treated as such.

He said that provoking Russia by putting missiles along its borders or admitting states under its sphere of influence into NATO would just add fuel to the fire.

“Today, it’s a new cold war even though our priority is to defeat Islamic totalitarianism,” he said.

“We can consider it an enemy and prepare a clash or adopt a second strategy to try and engage in a serious and frank dialogue to put in place conditions for peace in Europe,” he said, adding that he would seek that approach if elected.