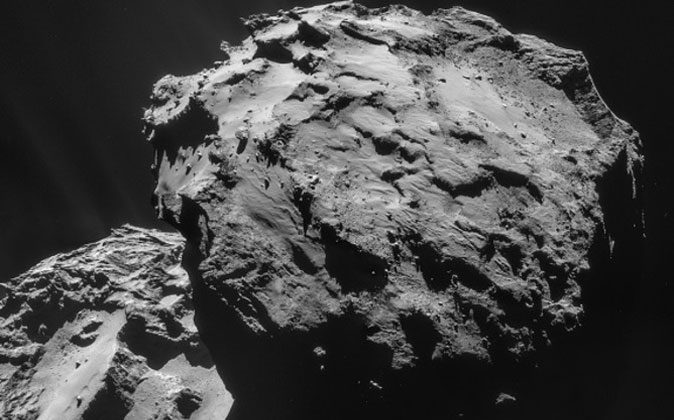 Images taken by Rosetta’s navigation camera on December 7 from a distance of 19.7 km from the centre of Comet 67P/Churyumov-Gerasimenko. (ESA)
Science

Rosetta Is Making a Splash Again, but Results Show Comet’s Water Not the Same as Earth’s

The first results on comet 67P Churyumov-Gerasimenko obtained by instruments on-board the Rosetta spacecraft have been announced – and they are, literally and figuratively, a deluge of information!

Over the past few months, the navigation cameras have provided us with amazing pictures of the surface of comet 67P. As the Rosetta spacecraft approached, the nucleus was revealed in increasing detail, as having a complex landscape of craters and plains, intersected by canyons and crevasses. Interest focused on the Philae lander and whether or not it would land safely on this hazardous surface.

Meanwhile, patiently and systematically, almost a dozen scientific instruments on the mother-craft were busy acquiring data on the temperature and density of the cometary nucleus, the gas and dust streaming away from it, its radio and plasma environment and the variation in composition of its surface. Many of these data were used to build up a picture of 67P, so that its rotation and gravitational pull could be calculated more accurately to enable Philae’s landing site to be pinpointed with greater precision.

As we saw in November, thanks to the Rosetta data, Philae touched down exactly where it was predicted to arrive. It was technical problems with the thruster and harpoons that caused the lander to go astray.

Now the data acquired by instruments on Rosetta are coming into their own, and the first insights to comet 67P’s ancestry have been published. ROSINA (Rosetta Orbiter Spectrometer for Ion and Neutral Analysis) has been acquiring mass spectra from the comet since early August, when Rosetta was around 100 km away. The report, by Kathrin Altwegg and colleagues in the journal Science, concerns the ratio of deuterium to hydrogen (D/H) in water in the comet’s coma. They have found this to be about three times the value of water on the Earth.

Why is this important? One of the main goals of the Rosetta mission is to uncover any relationship between water in comets and water on Earth. When the Earth first formed, its surface was molten and it lost a large proportion of its volatiles (water, carbon dioxide, etc.). The Earth that we know today must have acquired a new reservoir of these materials – but from where?

Comets, Kuiper Belt Objects and asteroids are all potential sources. Results from ROSINA have been interpreted as indicating that the family of comets to which 67P belongs (Jupiter Family Comets) is not solely responsible for delivery of volatiles to Earth. The report infers that asteroids played a greater role in the delivery process than previously anticipated.

Water Everywhere but Not a Drop to Drink

Where does this leave us? For one thing, we have to understand what the elevated D/H ratio means for the ancestry of the comet. To contain so much deuterium implies that the comet has a high proportion of interstellar water – it is indeed an amalgam of primitive material that has not been changed during its 4.5 billion year history.

And this leads us on to the other components of the comet, particularly organic compounds, the carbon-bearing molecules which are so abundant in the clouds from which comets form, and also which act as the building blocks of life. ROSINA has not yet reported any carbon data – but almost certainly will be doing so. Both the Ptolemy and COSAC instruments on Philae found organic molecules. When the Philae instruments report their data early next year we will be able to compare the D/H of water (as ice) with the ROSINA value for the D/H of water (as gas).

What will be interesting is to see what comes next – ROSINA continues to take spectra from 67P. As the comet approaches the Sun, its surface will become more active, and higher quantities of water will flow out into the coma. Will this water have the same D/H ratio? If not, what does that tell us about how a cometary surface evolves with time?

The Rosetta mission made a splash in the headlines with Philae’s nail-biting landing and the saga that played out over its battery life. Now with results on cometary water, a media splash is much more welcome to the mission scientists!