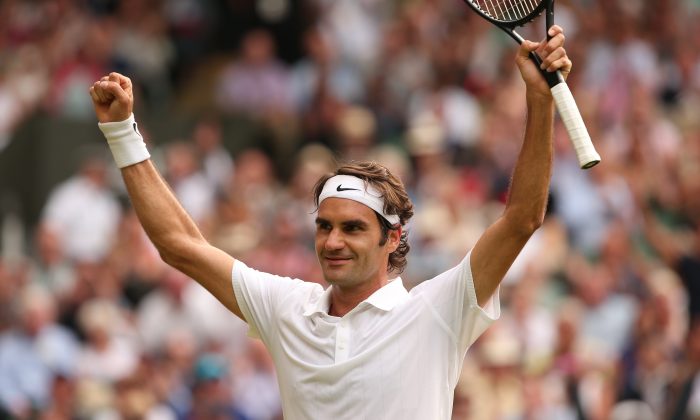 Live streaming will be available via BBC iPlayer and Watch ESPN, as well as the ATP and TennisTV.

Raonic has never beaten Federer before. Here are head to head stats for Federer and Raonic:

See some Raonic’s serve, highlights, and an AP article below.

LONDON (AP) — Milos Raonic is the first Canadian in more than a century to reach the semifinals at Wimbledon. That was the easy part — now he gets to face seven-time champion Roger Federer.

Raonic’s big serve — his ace on match point was 133 miles per hour (214 kph) — predictably was the topic ahead of Friday’s semifinal.

“I’ve got to do what I’ve been doing, serve well,” he said. “It’s going to be a great challenge and one that I’m going to relish because it’s something I really wanted … to put myself in this position.”

Federer knows that Raonic’s serve will be the key to the match.

“Clearly that’s what is most visible when you see him play,” Federer said. “That’s the hardest to deal with, I guess. It keeps him in the match. Doesn’t matter almost how he plays his return game. He’s been serving very well for this entire tournament.”

“Here clearly on the grass with a serve like that it’s never going to be an easy match,” he added. “That’s where you then sort of go back to your own game and say, ‘I’ll take care of my own serves and see what I can do on the return.'”

The 144th-ranked Kyrgios, who upset Rafael Nadal in the fourth round on Tuesday, was attempting to become the first wild card to make the semifinals at a Grand Slam since Goran Ivanisevic at Wimbledon in 2001.

Kyrgios said he was a bit flat after the win over Nadal.

“I had nothing else to give,” Kyrgios said. “Not to take any credit away from him. What he (Raonic) brought today was something special. But it’s still been the best couple of weeks of my life.”

Raonic hopes to be able to carry it one round further.

“It’s another step forward,” he said. “The goal is to be the best player in the world and this is one of those steps that you have to take to keep getting better.”