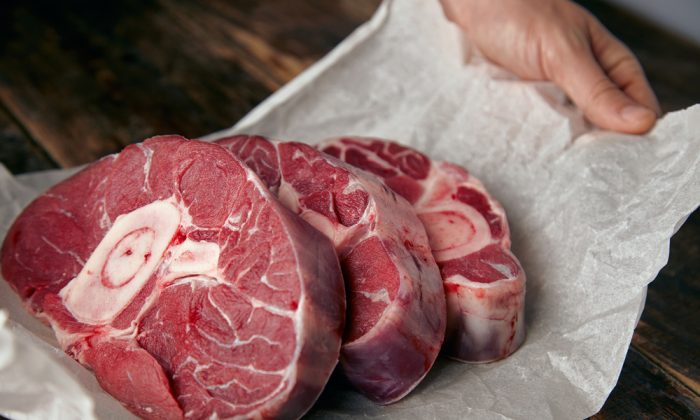 “Kosher” is widely interpreted as meaning pure, and many think kosher slaughter is better or more humane than traditional methods. But ritual slaughter is capable of causing great suffering, says animal expert Temple Grandin. “Some plants use cruel methods of restraint, such as suspending a conscious animal by a chain wrapped around one hind-limb. In more progressive plants, the animal is placed in a restrainer that holds it in a comfortable, upright position,” she writes.

“Most large cattle slaughter plants are using more comfortable methods of restraint, but there are still some plant managers who have no regard for animal welfare,” continues Grandin about kosher slaughter. “They persist in hanging large cattle and veal calves upside down by one hind-leg. There is no religious justification for use of this cruel method of restraint. The plants that suspend cattle/calves by one hind-leg do so in order to avoid paying the cost of installing a humane restraint device. Humane restraint devices can often pay for themselves by improving employee safety.”

Ritual slaughter isn’t about religious freedom at all but about cruelty to animals.

In both kosher (sanctioned by Jewish law) and halal (sanctioned by Islamic law) slaughter, cattle, sheep, goats, and other animals have their throats cut while fully conscious. Because they are not stunned or otherwise rendered insensate, their consciousness can be “prolonged for over 60 seconds,” even though the laws, Grandin notes, were devised to minimize cruelty. Almost half of cattle that are hoisted and shackled bellow loudly, according to one study, and “in some cases, those vocalizations can be heard outside the building,” writes Grandin.

Ritual slaughter is illegal in New Zealand, Switzerland, and the Scandinavian and Baltic countries. In 2011, the Dutch parliament voted to approve a ban on kosher and halal slaughter pending Senate approval. There are over one million Muslims and 52,000 fifty-two Jewish in the Netherlands. Both groups opposed the proposed ban as a direct attack. “This is not about animal rights,” said Joe M. Regenstein, a professor of food science who runs a kosher and halal food program at Cornell University. “It’s an invitation to Jews and Muslims to leave.”

But animal advocates say the opposite: “Ritual slaughter isn’t about religious freedom at all but about cruelty to animals.”

Former actress, sex symbol, and animal rights advocate Brigitte Bardot is a strong critic of ritual slaughter and the holiday Eid al-Adha, during which Muslims ritually slaughter sheep and other animals, often in public. “1,000 sheep were slaughtered last month only 300 yards from my house,” she lamented to the Washington Post, asking when the French government would enforce its stunning laws, which are similar to those in the United States.

Hubert Humphrey is remembered as a civil rights leader and voice during the Vietnam War, but he spearheaded the drafting and passage of the 1958 Humane Methods of Slaughter Act, which requires animals to be made insensitive to pain before being “shackled, hoisted, thrown, cast or cut.”

President Dwight D. Eisenhower signed the act and remarked that “if I depended on my mail, I would think humane slaughter is the only thing anyone is interested in.” Guess who opposed the act? The United States Department of Agriculture.

Humphrey wanted humane slaughter to be the law of the land, but a compromise was forced in 1958, making it only a condition of doing business with the federal government. In 1978, the year Humphrey died, Sen. Bob Dole (R-KS) strengthened the law to make it mandatory for the nation, except for religious slaughter. Senator Dole was also instrumental in passing the 1985 Improved Standards for Laboratory Animals Act. Few realized Dole’s strong animal advocacy when he ran for President in 1996.

Whether or not an animal is properly stunned and insensible to pain is easy to determine, writes Grandin whose guidelines “Animal Welfare and Humane Slaughter” are widely observed in the nation’s slaughterhouses.

In the United States, the sale of kosher meat has escalated through the perception that it is somehow comparable to organic meat. And, even though some Jews and Muslims might be bitter enemies, meat is one thing they agree on: Muslims “often substitute kosher foods when their own ritually produced and certified halal foods are not available,” reports the Sioux City Journal.