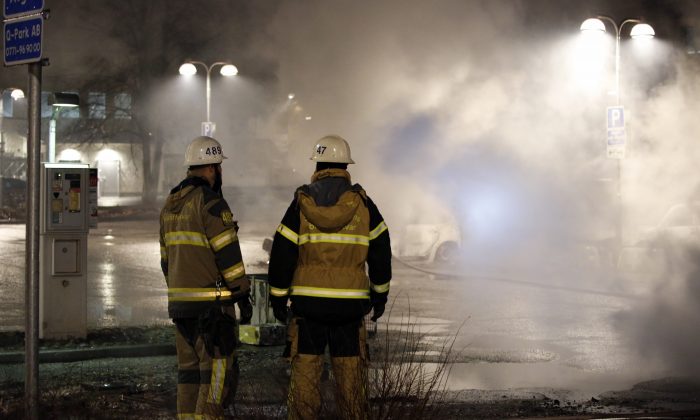 Firefighters survey the scene in the suburb of Rinkeby outside Stockholm on Feb. 20, 2017. Police in Sweden said Tuesday they were investigating riots that broke out overnight in a predominantly immigrant Stockholm suburb after officers arrested a suspect on drug charges. (Christine Olsson/TT News Agency via AP)
Europe

Riot in Stockholm Suburb After Drug Suspect Is Arrested

COPENHAGEN, Denmark—Swedish police on Tuesday were investigating a riot that broke out overnight in a predominantly immigrant suburb in Stockholm after officers arrested a suspect on drug charges.

The clashes started late Monday when a police car arrested a suspect and people started throwing stones at them in Rinkeby, north of Stockholm. Unidentified people, including some wearing masks, also set cars on fire and looted shops.

One officer was slightly injured when a rock hit his arm and one person was arrested for throwing rocks, police spokesman Lars Bystrom said Tuesday. Some civilians who tried to stop the looters were also assaulted, he added.

Another officer fired his gun, not as a warning shot but because he was “in a situation that demanded he used his firearm,” Bystrom said, adding “no one was hit.”

He declined to give further details, saying the episode would be investigated.

“This kind of situation doesn’t happen that often but it is always regrettable when it happens,” Bystrom said.