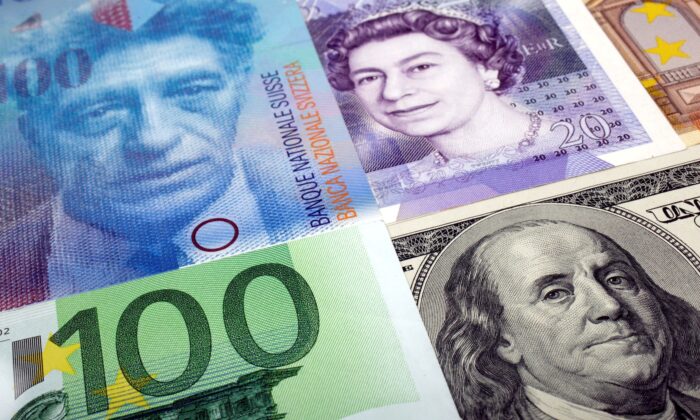 LONDON—The Swedish crown was hurt by the Riksbank’s dovish stance on Thursday, while other currency market moves were small as investors awaited key data on U.S. inflation for clues on the U.S. Federal Reserve’s policy-tightening trajectory.

Investors’ appetite for riskier assets has been hurt so far this year by expectations that the Federal Reserve will begin tightening monetary policy, starting with a rate hike at its March meeting.

Strong earnings helped global stocks rise on Wednesday, but they struggled to maintain this momentum during the Asian and early European sessions on Thursday.

“Even the ECB has now moved to take a more serious stance on inflation,” said Ima Sammani, FX market analyst at Monex Europe.

“So the fact that the Riksbank didn’t join them in this view… leaves the krona quite vulnerable to higher inflation expectations,” she said, adding that the move lower in the Swedish crown “could very well continue.”

Last week, the European Central Bank surprised investors by appearing more concerned about inflation and more willing to tighten monetary policy, prompting euro-dollar to jump to a three-week high of $1.1483.

The dollar index was little changed at 95.543. After large swings in the previous two weeks, it was on track for a minimal weekly change so far this week.

The Japanese yen hit a one-month low versus the dollar. The currency showed little reaction to the Bank of Japan saying that it would intervene in markets by offering to buy an unlimited amount of 10-year Japanese government bonds at 0.25 percent.

Markets were focused on U.S. inflation data. The headline consumer price index is expected to have increased more than 7 percent in January, year-on-year, a level reminiscent of the inflation shocks of the 1970s and 1980s.

“The higher the current inflation rates the stronger the perception is likely to be amongst market participants that the Fed will have to act even faster, more decisively and for a prolonged period of time than is currently expected,” wrote Commerzbank FX and EM analyst Antje Praefcke in a client note.

“That in turn is likely to provide a boost for the dollar.”

The Australian dollar, which is seen as a liquid proxy for risk appetite, was up 0.3 percent at $0.72025, while the New Zealand dollar was also a touch higher.

In cryptocurrencies, bitcoin was around $44,916, in its third consecutive week of gains. But it remains far below the all-time high of $69,000 it hit last November.