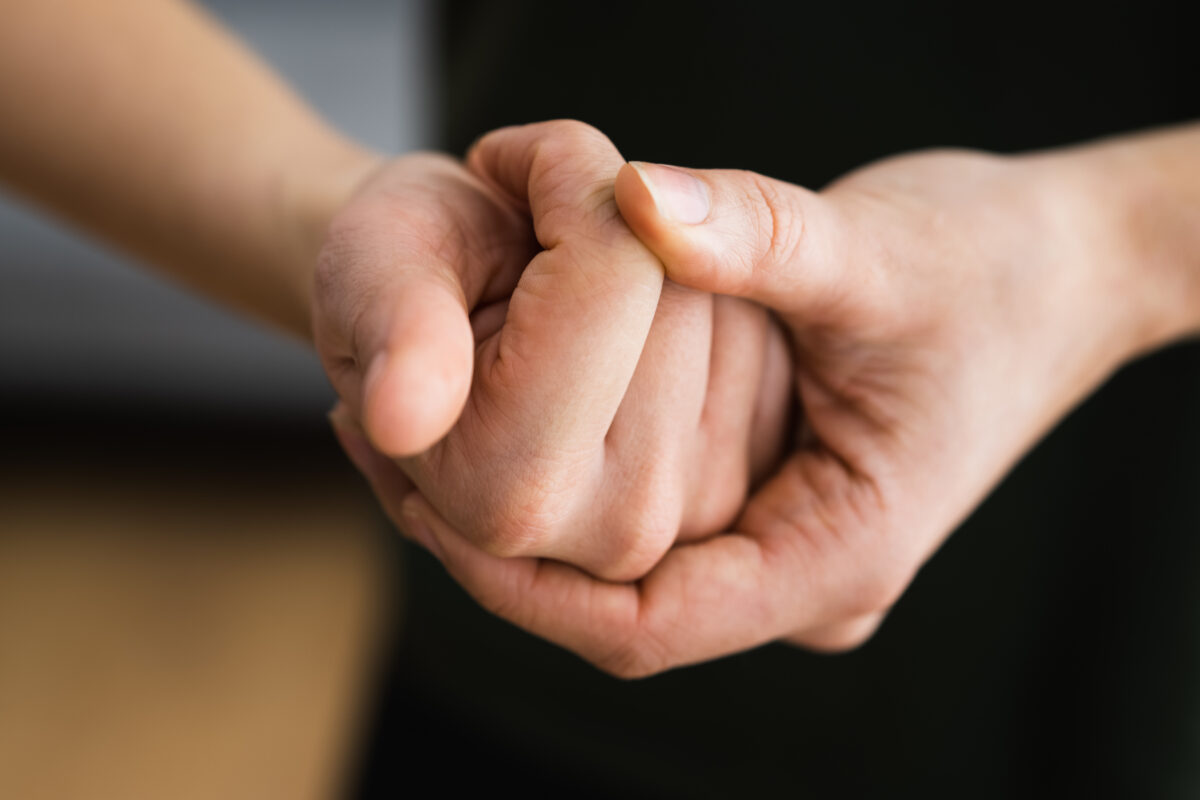 By Andrey_Popov//Shutterstock
Joint and Muscle Health

The Rheumatism Early-Detection Checklist, and Simple Stretches to Reverse It

Do not ignore the body’s distress signals, and take care of it early
BY Sonosuke Yukawa TIMEJuly 25, 2022 PRINT

Editor’s note: Rheumatoid arthritis is not a disease of the elderly. It mainly occurs between the ages of 30 and 50, and is prevalent in women. According to Dr. Sonosuke Yukawa, a Japanese rheumatologist who has treated more than 100,000 people, there is a chance to completely cure rheumatoid arthritis in its early stages. Therefore, early detection of the initial symptoms of rheumatism is of particular importance. If you want to go straight to the exercises, they are at the bottom of the article, but the preliminary tips and explanations preceding can benefit your usage of the exercises as well.

Rheumatoid arthritis is not a disease that exhibits sudden and serious symptoms.

In the early stages, most people usually “just feel tired.” For this reason, it is important to detect and distinguish the first symptoms as much as possible.

In this regard, the typical initial symptoms, such as “not being able to open a plastic bottle” and “hands feeling stiff and having difficulty moving the hands when waking up” are the most recognizable changes.

These are signs of inflammation in small joints such as those of the fingers.

Especially in the morning, the joints are more likely to feel stiff and swollen. This is because while sleeping, the body stays in the same position for a long time, and the inflammatory substances and joint fluid become stagnant, causing the initial symptoms to occur.

However, the stiffness and swelling will gradually disappear as the body does physical activities. This is because after blood circulation improves, inflammatory substances and joint fluids that were in a “stagnant state” begin to flow, relieving the symptoms.

These symptoms may not seem like much at first, but many people miss the opportunity to detect them early.

For the same reason, the inability to open a plastic bottle is also common during the time period between early morning and early afternoon.

If the aforementioned symptoms do not only occur between early morning and noon time, but also at noon or in the evening, the disease may be more advanced than the initial stage.

In any case, once you notice “something strange” about your body, don’t just dismiss it as a result of fatigue or aging. Do not ignore the body’s distress signals.

There are some signs that can help us identify the early stages of rheumatoid arthritis, such as “inability to open a plastic bottle” and “stiffness of the hands and difficulty moving the hands after waking up.” You can use this self-assessment checklist to identify such symptoms.

Some of the symptoms listed below may be surprising to you, but in fact, most of them come from patients’ own experience.

Do you have any of the following symptoms? If so, it may be the first sign of rheumatism.

□ Stiffness in hands and difficulty moving your hands when waking up

□ Feeling tired all the time

□ Difficulty opening a door with the key

□ Difficulty typing on the computer

Even if there is no recent “obvious cause” such as joint pain after a fall or clash, if you have any of the symptoms on the list, it may be the first sign of rheumatism.

Please put aside the thoughts that you may be just too tired, or that “it is better not to go to the doctor for such a minor problem,” and make a prompt decision to consult a doctor.

Once you feel that your body has a condition, do not hesitate and go to seek medical advice as soon as possible, in order to really shorten the “disease progress time.”

Although there may be some discrepancies in the findings and data reported, the number of women suffering from rheumatoid arthritis is four to five times more than men.

In addition, besides rheumatoid arthritis, almost all people affected by autoimmune diseases are more likely to be women than men.

The reason for the larger proportion of female patients is the plausible theory that “female hormones are the key.” Specifically, such hormones are estrogen (a follicle stimulating hormone) and lactogen (a hormone that stimulates the mammary glands).

However, female hormones are not the direct cause of diseases, and the largest cause is abnormal immune function. Female hormones play the role of “driving force of autoimmune diseases.”

In addition, a study reported that women who had an early menarche (first menstrual period) have a high incidence of the disease, with blood tests showing a positive rheumatoid factor (RF) of 20 or more. It has also been reported that women taking oral contraceptives may have a lower incidence of rheumatoid arthritis due to the suppression of estrogen production and activity in the body.

Many of you may have heard that rheumatoid arthritis patients are prone to the following changes in symptoms during pregnancy, childbirth, and breastfeeding:

It is clear that there is a correlation between female hormones and rheumatoid arthritis. However, people cannot regulate the amount of hormones they secrete.

Therefore, rheumatoid arthritis has been called a “disease that cannot be prevented.”

So, pragmatically, we must accumulate enough knowledge and keep the mindset that we may need to pay more attention during the onset of the disease.

In addition to female hormones, other factors that trigger the onset of rheumatism include stress and smoking.

Stress, like female hormones, is a completely unpreventable factor, and the key to eliminating it lies in one’s psychological state. On the other hand, we need to be aware of the risks of smoking and quit smoking as soon as possible.

Safe and Easy Stretching Exercises That Have Instant Effects

The joints are the “connecting parts” between the bones. Through repeated contraction and stretching of the muscles attached to the bones, the joints, which are composed of bones, can move steadily and enable us to make smooth movements.

This is a common mechanism for all joints in the body, large and small.

Therefore, the key to smooth movements of rheumatic joints is to maintain and improve “joint range of motion” and “muscle function.”

When Dr. Yukawa explains this to his patients, this is the response he usually hears: “If that’s the case, should I just do rheumatic exercises?”

Yes, it is true that rheumatic exercises, which have been widely known to the public for a long time, can bring benefits to the joint range of motion and muscle function.

Many people with rheumatoid arthritis have heard of rheumatic exercises from their physicians. These exercises can be found in health education manuals issued by medical institutions, in rheumatology-related books, and on the Internet.

In Japan, these kind of rheumatism exercises have been promoted to the public for decades.

However, these “long-established rheumatic exercises” bring a heavy burden to the joints, and there have been some cases of inflammation worsened as a result. In this way, the burden on the patient is actually increased.

The worsening inflammation will directly aggravate the pain and swelling, which will undoubtedly sow more “seeds of trouble” for patients who are already suffering from rheumatism.

In fact, Dr. Yukawa has heard countless doubts and much confusion about rheumatic exercises from patients who come to his clinic.

Therefore, he has decided to make public this set of “soothing stretching exercises” for the first time.

Compared with the old rheumatic exercises, they are not only safer and easier to perform, but can also show results very quickly.

As aforementioned, these soothing stretching exercises have the effect of improving joint range of motion and muscle function, and many patients who practice them feel more flexible than before.

However, the beneficial changes don’t stop there.

This set of stretching exercises also inhibit and relieve pain, swelling, and stiffness in the joints.

The secret is to take into account the importance of not stressing the joints in a way that can worsen inflammation, while also exercising the adjacent muscles to allow the joints to fully bend and stretch.

In this way, the internal pressure in the joint capsule, a pocket of tissues that covers the entire joint, changes moderately, removing inflammatory and pain-causing substances from the joint capsule.

In this way, inflammation, pain, swelling, stiffness and other symptoms are brought to a state of inhibition and relief through a series of mechanisms.

In this set of exercises, Dr. Yukawa has also prepared various stretches for the major joints that are prone to rheumatic symptoms. And he hopes everyone can give them a try.

Tips on How to Perform ‘Soothing Stretching Exercises’

Before learning the specific steps of the exercises, it’s important to know a few tips that can really make the stretching exercises helpful to your body.

There are five key points:

① Do not do exercises when you feel pain, wait until your symptoms have improved to a certain extent, and then do them within your limits without pushing yourself.

② Don’t make excessive effort, and do not move too fast or with too much force.

③ When performing multiple types of stretching exercises, you can take a moment to take a deep breath to relax yourself.

④ The time periods not recommended for doing exercises are after bathing at night and before going to bed, and right after waking up in the morning.

⑤ If you feel pain when doing the basic movements, try to keep the range of motion of your joints only as large as until the pain appears.

Are you ready? Below are three “soothing stretching exercises” for you to select and try.

With this exercise, you can stretch your finger joints and surrounding muscles.

Steps: Extend both hands forward, and make your dominant hand always the winning side of the rock paper scissors game as you go through all the combinations of moves. One set is completed after the dominant hand makes the rock, scissors and paper signs, while winning each time.

Key point: When both hands are showing the same sign, the knuckles sometimes exert extra force. So the trick is to think a little when guessing the next sign and slow down your movements to avoid putting extra strain on your joints.

This exercise allows your toes to stretch, as toes rarely move much in daily life.

Key point: Fully stretch your toes, through the action of towel gripping.

This exercise not only maintains the toes’ range of motion, but also maintains the function of their surrounding muscles, and it is very effective.

People today hardly ever go barefoot, so the opportunities to exercise your toes in daily life are greatly reduced. Therefore, you may want to do this exercise more often when you have the chance.

Lift your waist and buttocks against gravity and perform a “mini muscle training” for the lower body muscles.