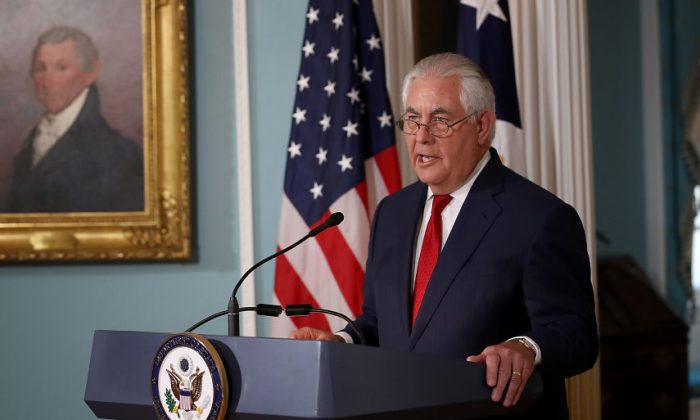 Secretary of State Rex Tillerson delivers a statement at the State Department in Washington, DC, on Oct. 4, 2017. (Win McNamee/Getty Images)
US News

Rex Tillerson shot down an exclusive report by NBC News that claimed the secretary of state had considered leaving his post.

Talking to reporters at an unscheduled press briefing on Wednesday, Tillerson said he had never considered leaving and was committed to the President and his agenda.

When asked about it again by reporters he said: “I have answered that question repeatedly, for some reason it continues to be misreported.”

“While I’m new to Washington, I’ve learned that there’s some that try to sow dissension to advance their own agenda by tearing others apart in an effort to undermine Trump’s own agenda,” he said.

“I do not and I will not operate that way, and the same applies to everyone on my team here at the State Department.”

NBC News claimed in the highly speculative article that Vice President Mike Pence had to convince Tillerson to stay on after he was allegedly upset over a speech Trump had given to the Boy Scouts.

The disputed article, which relied entirely on anonymous sources, also alleged that Tillerson had called the president a “moron.”

When asked about the insult, Tillerson criticized those he said are trying to divide America.

“I’m not going to deal with petty stuff like that, I mean, this is what I don’t understand about Washington. I’m not from this place. But the places I come from we don’t deal with that kind of petty nonsense. It is intended to do nothing but to divide people. I’m just not going to be part of this effort to divide this administration,” Tillerson said.

Tillerson praised Trump in his response for putting America first in both domestic and international policy.

“Let me tell you know what I’ve learned about this president, who I did not know before taking this office,” Tillerson said. “He loves his country, he puts Americans and America first. He’s smart, he demands results wherever he goes, and he holds those around him accountable for whether they’ve done the job he’s asked them to do. Accountability is one of the bedrock values the president and I share.”

President Trump also responded to the reporting describing NBC News as “more dishonest than even CNN.”

“They are a disgrace to good reporting. No wonder their news ratings are way down!” Trump wrote on Twitter.

NBC news is #FakeNews and more dishonest than even CNN. They are a disgrace to good reporting. No wonder their news ratings are way down!

In a follow-up Tweet, Trump wrote that the story had been totally refuted by Tillerson and Vice President Pence. He also called on NBC News to issue an apology to the country.

The @NBCNews story has just been totally refuted by Sec. Tillerson and @VP Pence. It is #FakeNews. They should issue an apology to AMERICA!

Just days earlier, on Oct. 2, NBC News had published an article saying that President Trump was right in his statements that most media coverage of him has been negative.