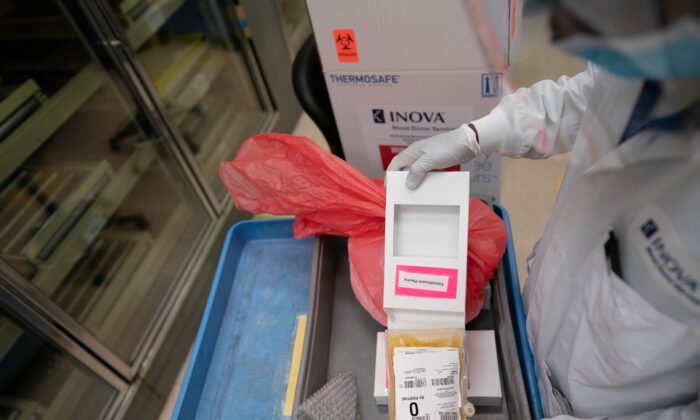 Data on the effectiveness of convalescent plasma for hospitalized COVID-19 patients is still inconclusive despite more than a year since the federal authority first issued an emergency use authorization (EUA) for the therapy and many studies have been conducted.

Findings from a recent randomized controlled trial suggest that convalescent plasma—the liquid component of blood containing antibodies—from people who successfully recovered from COVID-19, did not help hospitalized patients with the disease and may be harmful.

“It has been thought that the blood plasma of COVID-19 survivors would help those seriously ill from the virus but, unfortunately, it does not,” Donald Arnold, coauthor of the study and professor of medicine at McMaster University said.

“We are cautioning against using convalescent plasma to treat COVID-19 hospitalized patients, unless they are in a closely monitored clinical trial.”

The study also found that patients in the plasma group experienced more serious adverse effects than those receiving standard of care. Most of the side effects were worsening hypoxemia, or low blood oxygen, and respiratory failure. However, there was no significant difference in the rate of fatal adverse events between both groups.

The study involved 938 COVID-19 patients who either received convalescent plasma or standard of care in 72 hospitals across the United States, Canada, and Brazil between May 14, 2020 and Jan. 29, 2021.

The authors said that the findings were consistent with a larger randomized study, the RECOVERY trial involving 11,558 hospitalized COVID-19 patients that “found that the risk of death after the administration of high-titer plasma was not different from the standard of care.”

In a newer study that is yet to be peer-reviewed, researchers analyzed the variables that affected the efficacy of convalescent plasma in 23 randomized controlled trials (RTC) and found that although there were mixed data on clinical efficacy, convalescent plasma reduced mortality in many of the studies.

“Focusing only on the results from the 23 available RTC we noted that these were more likely to show signals of efficacy, including reductions in mortality if the plasma neutralizing titer was ≥ 160 and the time to randomization was ≤ 9 days, consistent with passive antibody therapy efficacy requiring dosing with sufficient antibody,” the authors wrote.

“The fact that most studies revealed signals of efficacy despite variability in [COVID-19 convalescent plasma] and its use suggest robust therapeutic effects that become apparent despite the data noise,” the authors added.

Early in the pandemic, convalescent plasma was thought to possibly lessen disease severity or help patients recover more quickly like it did in previous viral outbreaks.

It is believed that the antibodies from the plasma may provide passive immunity and benefit those who are seriously ill, as it usually takes about one to three weeks to develop an antibody response following infection, according to the Centers for Disease Control and Prevention (CDC).

The FDA issued EUA for convalescent plasma to treat confirmed or suspected COVID-19 hospitalized patients on Aug. 23, 2020. The issuance was based on the available evidence at that time, including data from the Mayo Clinic-sponsored Convalescent Plasma Expanded Access Program that was established by the FDA to increase access to the plasma in seriously ill patients. The program received $26 million from the Biomedical Advanced Research and Development Authority.

In February 2021, the federal regulator revised the emergency use to only allow for the administration of plasma with high levels of antibodies, or high-titer convalescent plasma, early to hospitalized COVID-19 patients before they went into respiratory failure or to patients with impaired immunity.

“Based on the totality of scientific evidence available at this time, the known and potential benefits of high titer COVID-19 convalescent plasma outweigh the known and potential risks when administered early in the course of the disease, and those hospitalized with impaired humoral immunity,” the FDA said in the fact sheet given to health care providers.

The FDA said that studies have found that low titer plasma was not effective in treating hospitalized patients and would no longer authorize it for emergency use. The National Institutes of Health (NIH) also recommends against the use of plasma with low levels of antibodies.

The NIH, however, took a neutral stance on the recommendation of high-titer convalescent plasma in COVID-19 outpatients or who are hospitalized with impaired immunity, citing insufficient evidence. It also advises doctors to not prescribe high-titer plasma in patients on mechanical ventilation, unless in a clinical trial.

Dr. Paul Marik, Professor of Medicine and Chief of the Division of Pulmonary and Critical Care Medicine at the Eastern Virginia Medical School, who has been treating COVID-19 patients since the beginning of the pandemic, says convalescent plasma is only effective in patients who are “severely immunocompromised.”

“Convalescent serum is of no value at all; the exception is those who are severely immunocompromised,” Marik told The Epoch Times via email.

Marik is one of the co-founders of the Front Line COVID-19 Critical Care (FLCCC) Alliance, an organization of physicians from around the world advocating for the off-label use of ivermectin to treat COVID-19.

The group claims that ivermectin, an FDA-approved anti-parasitic drug that has treated river blindness, scabies, and head lice in humans, is effective in treating COVID-19 when used early. The drug’s anti-viral and anti-inflammatory properties have been shown to stop the replication of the CCP (Chinese Communist Party) virus, also known as the novel coronavirus, that causes COVID-19.

Marik and his organization said that a meta-analysis of 18 randomized controlled trials showed that ivermectin significantly reduced “mortality, time to clinical recovery, and time to viral clearance” in patients with COVID-19. And in a revised meta-analysis, excluding a study that had been retracted, Marik says the findings are still positive.

“Recently, the study conducted by Elgazzar et al has come under scrutiny with accusations of scientific misconduct. His paper was apparently retracted without his knowledge and without giving him the opportunity to defend these serious crimes,” Marik wrote in the American Journal of Therapeutics.

“While this issue is being resolved, we decided to redo the original meta-analyses excluding this study. The summary point estimates were largely unaffected when the study by Elgazzar et al was removed.”

In updated guidance, the FDA claims that “currently available data do not show ivermectin is effective against COVID-19” and warned people against taking large doses of the drug or use the medication intended for animals.

The FDA says the most effective method to “limit the spread of COVID-19” is to get vaccinated and follow the CDC’s guidance.

Remdesivir remains the only antiviral drug approved for severely ill hospitalized patients with minimal effect. The drug was approved back in October 2020 although there were mixed results of the effectiveness of the drug in reducing mortality or the time to recovery.

The American Red Cross, says it had stopped collecting convalescent plasma from recovered COVID-19 patients since June 2021 due to low hospital demand and that blood industries have enough supply in storage.

Prior to discontinuing its convalescent plasma program, the Red Cross and other blood organizations were instructed by the FDA (after the rollout of the vaccines) to not collect plasma from people who’ve been vaccinated, unless they had the disease and recovered prior to getting the shot.

The spokesperson said that was because “when an individual has been infected with a virus, they produce antibodies to multiple regions of a virus, including the nucleocapsid protein. An individual who has received a COVID-19 vaccine will produce antibodies to the spike protein of the virus, but not the nucleocapsid protein, which will only occur in the event of a COVID-19 infection.”

While the Red Cross has stopped its convalescent plasma program, the organization says that people can still donate blood or platelets regardless if they’ve recovered from COVID-19 or received a COVID-19 vaccine. The Red Cross is facing a shortage of blood as a result of fewer people donating during the pandemic.

“The Red Cross is grateful for the generosity of the public during the pandemic as many have rolled up their sleeves to donate lifesaving blood to help patients,” the spokesperson said. “However, the Red Cross continues to have an ongoing, critical need for lifesaving blood as blood product distribution to hospitals remain higher than anticipated.”