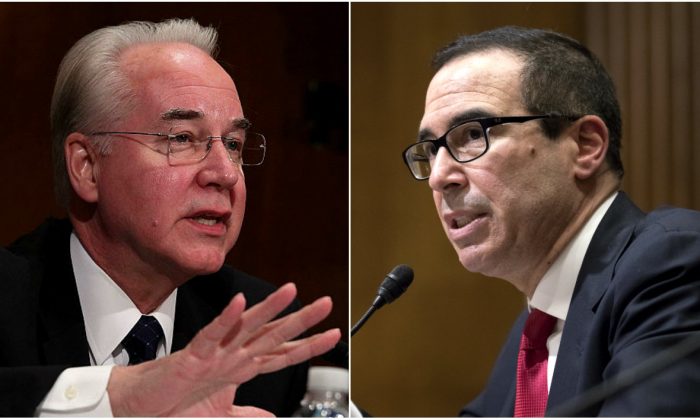 WASHINGTON—Republicans voted on two key picks for President Donald Trump’s cabinet on Feb. 1 despite a boycott by Democrats.

Republicans voted 14-0 for both financier Steve Mnuchin for Treasury secretary and Rep. Tom Price, R-Ga., to be health secretary in roll call votes.

Republicans had to temporarily change voting rules to allow the vote in their respective committees to take place. Normally at least one member of each party is required to be present to vote, but democrats had boycotted the vote as they had the day before.

Underscoring the frustration, Finance panel Chairman Orrin Hatch, R-Utah, said Democrats should be “ashamed” for staying away from his committee’s meeting.

“I don’t feel a bit sorry for them,” he told reporters, adding later, “I don’t care what they want at this point.”

Democrats had objected to the votes, arguing both nominees needed to provide more information about their financial backgrounds.

“It’s deeply troubling to me that Republicans on the Finance Committee chose to break the rules in the face of strong evidence of two nominees’ serious ethical problems,” said the panel’s top Democrat, Ron Wyden of Oregon.

Democrats say Price had special access to low-priced shares in an Australian biomed firm, even though he testified the offer was available to all investors. They say Mnuchin ran a bank that processed home foreclosures with a process critics say invites fraud.

The two men have denied wrongdoing and have solid Republican backing.

Trump won one major victory, as the Senate confirmed Rex Tillerson to be secretary of state. The mostly party-line 56-43 vote came with Democrats critical of Tillerson’s close ties to Russia as former Exxon Mobil CEO.

But the prospects that GOP donor Betsy DeVos would win approval as education secretary were jarred when two GOP senators, Susan Collins of Maine and Alaska’s Lisa Murkowski, said they opposed her. Both challenged her support for public education, and their defections meant Vice President Mike Pence might need to break a tie in a Senate that Republicans control 52-48.

The Senate Judiciary Committee used a party-line 11-9 vote to sign off on Sen. Jeff Sessions, R-Ala., for attorney general.

At the Senate Environment and Public Works Committee, Democrats boycotted a planned vote on Scott Pruitt, Oklahoma’s state attorney general in line to lead the Environmental Protection Agency. The vote was postponed.