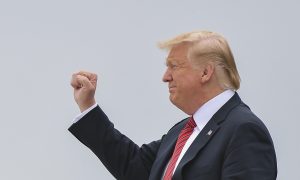 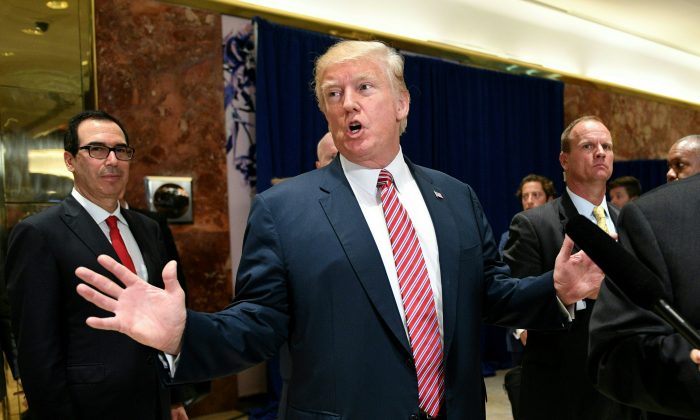 President Donald Trump answers questions about protests in Charlottesville after a statement on infrastructure at Trump Tower in New York on Aug. 15, 2017. (Jim Watson/AFP/Getty Images)
2020 Election

A slew of reporters who wrote about former vice president Joe Biden being confronted over his misleading statements regarding President Donald Trump’s post-Charlottesville remarks left out the portion of Trump’s remarks that shows Biden is wrong.

Reporters with Business Insider, The Hill, Yahoo, the Des Moines Register, Politico and Mediaite were among those writing stories about the confrontation without providing the transcript.

Biden at the Iowa State Fair on Aug. 8 was confronted by a Breitbart reporter, who noted that Trump specifically condemned neo-Nazis after the Charlottesville clashes in 2017 and that “he never called neo-Nazi’s ‘very fine people.'”

“No,” Biden responded. “He called all those folks who walked out of that—they were neo-Nazis. Shouting hate, their veins bulging … he walked out and he said—let’s get this straight—he said ‘there are very fine people of this group.’”

Trump told reporters after a protester was killed by a white nationalist in Charlottesville that “you had some very bad people in that group, but you also had people that were very fine people, on both sides.”

“You had people in that group that were there to protest the taking down, of to them, a very, very important statue and the renaming of a park from Robert E. Lee to another name,” Trump said.

“You know what? It’s fine, you’re changing history, you’re changing culture, and you had people—and I’m not talking about the neo-Nazis and the white nationalists, because they should be condemned totally—but you had many people in that group other than neo-Nazis and white nationalists, okay? And the press has treated them absolutely unfairly,” Trump added.

Trump said: “I’m not talking about the neo-Nazis and the white nationalists, because they should be condemned totally”

Reporters tried spinning the confrontation of Biden as a win for the former vice president, leaving out the transcript and opining on Trump’s post-Charlottesville comments.

“After the Charlottesville rally, Trump defended the white supremacists, saying, ‘You also had people that were very fine people, on both sides,'” wrote Joseph Zeballos-Roig of Business Insider.

“Some Trump supporters have since made the case that the president’s words were taken out of context and that he was not describing the white nationalists as ‘very fine people,'” wrote Jonathan Easley of The Hill, without showing what Trump said at the time.

“Trump’s infamous response—that there were ‘very fine people on both sides’ of the Charlottesville episode—drew widespread outrage among Democrats, Republicans and even members of his administration,” wrote Dylan Stableford of Yahoo.

“Trump has defended his comments on the Charlottesville protests,” wrote Robin Opsahl of the Register, without providing any of Trump’s remarks after the violence in Virginia.

Some reporters seemed to defend Biden, writing that he “shut down” or “tore into” the Breitbart reporter, Joel Pollak.

“You also had people that were very fine people, on both sides.”

Why did you need to omit this? pic.twitter.com/k26qetCCmu

Trying to defend the candidate, his spokesman Bill Russo posted a transcript of Trump’s remarks on Twitter that omitted where Trump said: “I’m not talking about the neo-Nazis and the white nationalists, because they should be condemned totally.”

“Why did you need to omit this?” Breitbart asked, posting a fuller transcript.