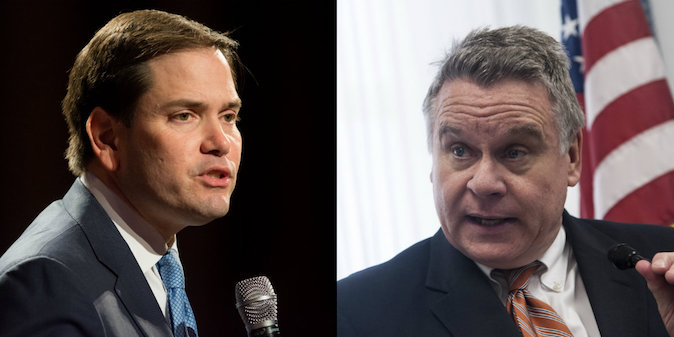 When the United States helped China join the World Trade Organization in 2001, it was on the expectation that the Chinese Communist Party would align its system with international laws and norms.

Nearly 15 years later, China has become the world’s second largest economy. But the Party has brought the country backwards in terms of human rights and the rule of law, according to the Congressional-Executive Commission on China’s (CECC) 2016 Annual Report.

“The Chinese government’s human rights record is utterly deplorable,” said CECC chairman and Representative Chris Smith (R-NJ) in a statement. “It is a dark time for China’s reformers, dissidents, and rights defenders as they face escalating repression and conditions deteriorated again last year.”

The 346-page bipartisan report calls attention to 19 problem areas in China today, including a crackdown on human rights lawyers; the abuse of Tibetans, Uyghurs, and North Korean asylum seekers; the compromise of Hong Kong’s “One Country, Two Systems” self-governing principle; environmental pollution; and the repression of religious groups.

Some of the regime’s human rights problem areas intersect in their persecution of a traditional Chinese spiritual discipline. The CECC report noted that practitioners of Falun Gong still face “continued harassment and abuse” after the regime launched its persecution campaign in 1999.

Rights defense lawyers who took on Falun Gong cases were also targeted by the regime. Law professor Zhang Zanning was harassed in November 2015, while prominent rights attorney Wang Yu was formally arrested in January 2016. The regime persists in restricting the movements of Gao Zhisheng, one of the first Chinese lawyers to defend Falun Gong practitioners.

In a statement, Rep. Smith said that “detained Falun Gong practitioners, and other prisoners, were reportedly victims of the horrible crime of organ harvesting,” while the CECC report notes international skepticism over China organ czar Huang Jiefu’s claims that the regime has stopped using organs from prisoners.

On June 13, the U.S. House of Representatives unanimously passed a resolution condemning the Chinese regime’s practice of harvesting organs from prisoners, including Falun Gong practitioners.

The latest CECC report “paints an undeniably bleak situation of the deterioration of human rights and the rule of law in China,” said Senator Rubio in a statement.

But despite the two country’s commercial relations, he continued, the United States “will stand with that country’s reformers and dissidents and press the Chinese Government and Communist Party to respect basic human rights and uphold the rule of law, just as we expect of any responsible country.”