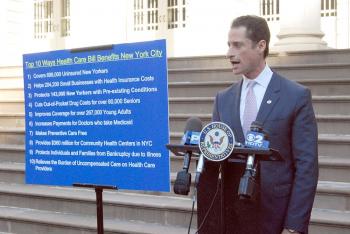 By Catherine Yang
Print
NEW YORK—The House of Representatives passed a health care reform bill on Nov. 7 to bring down the cost of health care and put more money into Medicare.

On Sunday Rep. Anthony Weiner released the top 10 benefits of the bill, the Affordable Health Care for America Act.

“Last night the House of Representatives passed a historic health care reform bill that will help millions of middle class New Yorkers struggling to pay their skyrocketing insurance premiums,” Weiner said. “With this bill, New York seniors, doctors, the uninsured, and those who have been denied insurance due to a preexisting condition will no longer have to be forced to pray at the alter of the insurance industry to receive quality, affordable and stable care.”

Rep. Weiner said that with the current health care system, there’s money that’s never recaptured, a loophole that has already resulted in three hospitals in Queens closing in this last year.

“It’s not like the bill fairy pays for that,” Weiner said.

But the new bill, Weiner said, has had expenses recaptured each and every step of the way. The bill would help another 698,000 New Yorkers get health insurance and lower the number of uninsured New Yorkers from 1,131,530 to 433,530.

“I think it’s going to grow the economy,” Weiner said. “Small businesses are the backbone of the economy.”

Third on the top 10 list is that anyone with a pre-existing condition will be able to purchase affordable coverage—which 143,000 more people will qualify for.

The bill also lowers costs for drugs for seniors. The Medicare Part D “doughnut hole” will be closed under this bill over the course of the next few years, and the 80,000 seniors in New York City who have to pay full cost for their prescription drugs would be provided immediate relief. The first $500 of the costs will be covered in 2010, and brand-name drug costs will be cut by 50 percent.

Weiner said that another benefit of the bill is that it will protect individuals and families from bankruptcy, since annual out-of-pocket spending will cap at $5,000 per person and $10,000 per family. These caps would prevent the 6,450 health care related bankruptcies in New York City last year from repeating.

Additionally under the bill, Medicaid doctors will receive pay increases; their current rates are only 36 percent of Medicare’s rates; $360 million will be provided directly to the 180 community health care centers throughout New York City, and people under 26 will be allowed to continue receiving coverage under their parents’ policies, at the discretion of their parents.