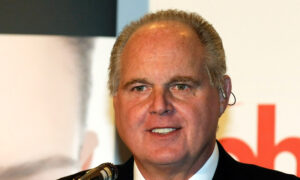 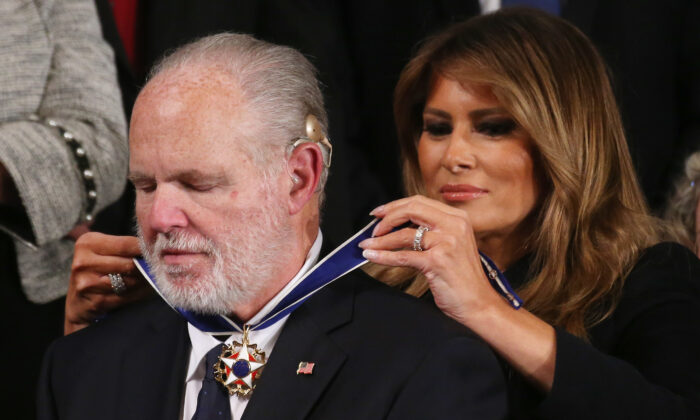 Radio personality Rush Limbaugh reacts as First Lady Melania Trump gives him the Presidential Medal of Freedom during the State of the Union address in the chamber of the U.S. House of Representatives in Washington on Feb. 4, 2020. (Mario Tama/Getty Images)
Viewpoints 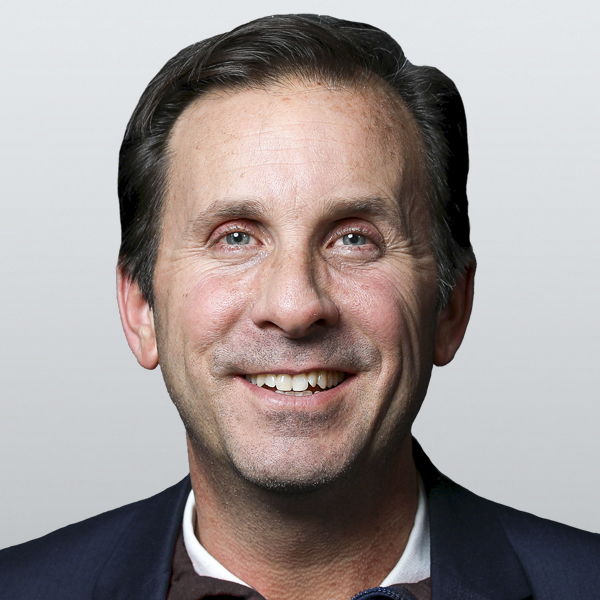 It was the summer of 1989, and I was working a job that robbed the season of all the joy that so many associate with the months in between school. I was selling door to door 1,500 miles from home. On foot. In rural Illinois.

This comes up because a co-worker was doing the same difficult job; albeit by car. Marco Perez drove from neighborhood to neighborhood, only to park his car upon arrival ahead of knocking on the doors of strangers.

Soon enough Marco was spending more time in his air-conditioned auto than suffering the indignity of curtains closing as he walked up to front doors. At least in the 11-2 hours. What changed? Well, the job was pretty awful. While nearly all work has a sales quality to it, inveigling one’s way into houses manned by skeptical mothers and fathers brings new meaning to “cold call.” All too many of us going door-to-door were distracted that summer.

In Marco’s case, he had a different distraction: it was Rush Limbaugh.

Marco discovered him in between neighborhoods. Sometimes he would pick up a fellow co-worker named Mark Griffin. They would ride along together listening to him. Slammed doors can be tiring…

By 1989 Limbaugh had moved his show from Sacramento to the center of the media universe: New York City. His name was growing. He had a national broadcast, and soon enough Marco found himself listening to Limbaugh on a daily basis. The informative and wildly entertaining radio host proved a wondrous escape from cold calling that began at 8 am each day, and ended 12 hours later.

Marco couldn’t get enough of Rush, and talked about him endlessly. This wasn’t some self-serious host loudly sipping coffee in between longish, supposedly erudite statements. This was Rush Limbaugh. He was a blast. Limbaugh very sadly passed away Wednesday after an unsuccessful battle with lung cancer. I thought of Marco upon hearing the news, but first and foremost thought of my mother. It was through her that I first heard of Rush.

My mom had been a regular listener since Rush’s days in Sacramento. A longtime devotee of southern California talk radio, Toni Grant had long been my mother’s favorite. Seared in my memory are the interminable shopping trips taken with her around Pasadena while Dr. Grant talked her listeners through their endless personal problems. She was fascinating, and blunt. During one car ride Grant told a female listener complaining about her husband that “you sound like a b-tch.” Grant was pure entertainment, but then came Rush Limbaugh and my mom, like millions of others, never looked back.

She listened to him religiously right up to his last broadcast. My mom’s devastated. Tens of millions of Americans are. While Rush was always on in any car that my mother was driving, what I most remember is her walking around the house with a primitive radio in her hand, listening intently to this most skillful communicator. She carried it from room to room with her for decades despite having access to much more modern technology. Rush was special. Rush was hers, as he was for so many millions of others, and he would be listened to on his own radio. The only thing that changed about the radio was the volume at which it was set. Age does something to hearing, it seems.

My mother loved Rush for his politics for sure, but more than anything I think she was entertained. He was a great deal of fun. And funny. When not extolling the virtues of limited government, he artfully skewered the other side. All ideologies have their ridiculous adherents, and Rush would expose the absurdity that was so long evident on the Left, but often uncommented on.

And while Rush’s politics seemingly changed with time, it was hard not to conclude that he was more small “l” libertarian than conservative or Republican in his early days. More than my mother would like to admit, she’s a libertarian in outlook, which surely factored in his appeal to her. It’s hard to say why, but the view here is that someone so funny (“Talent on loan from God” still makes me laugh decades later) couldn’t possibly be rigid in a personal or political sense. It seemed to me that at his core Rush believed “live and let live.”

Was he a great man? Of course he was. How many individuals can claim to have created in many ways an all-new industry sector? Better yet, how many can claim to have transformed American politics? Rush did, and could. When Republicans took back Congress in 1994 after decades of being the minority party on Capitol Hill, it was impossible to not see the work of Rush in this change. Some even called the 1994 ushering in of Republicans the “Rush Limbaugh Congress.” With good reason.

Why did Rush help effect such a substantial political landscape change? I’d like to think it was his optimistic side. He knew why the United States was great. It was the people. People who had risked everything to get here, including their lives. In Limbaugh’s words, “the U.S. is the first time in the history of the world where a government was organized with a Constitution laying out the rules, and that the individual was supreme and dominant, and that is what led to the U.S. becoming the greatest country ever because it unleashed people to be the best they could be.” To Rush, America’s greatness was a consequence of rare people from everywhere who came here not seeking assurance, or security on the backs of others, but who knew they could create their own security and happiness in a place where they were free to live as they wanted to.

Crucial is that Rush combined this optimism about the source of the United States’ greatness with comedy. It can’t be said enough how funny he was. To be fair, the left are great at comedy. See Hollywood and the great movies produced there that captivate the world. Rush understood entertainment in the way that many who strangely despised him did. If only they knew how enjoyable he was. Millions judged him and his politics without listening to him or his politics. But tens of millions did enjoy him, and many converted to conservatism thanks to his optimistic, entertaining way of presenting it.

Some will say he changed in later years, that with the rise of Donald Trump, Rush was no longer Rush. There’s perhaps truth to this. He embraced protectionism that he’d formerly found abhorrent, plus became in the words of James Glassman (someone who’d been on Rush’s show more than once, and who once guest-hosted for him) an “anti-immigrant obsessive” in ways that perhaps belied his essential statement about why the United States was—and is—“the greatest country ever.” Whatever the answer, it’s a debate or discussion that won’t take place here.

What will be said was that Rush was wonderfully insightful. To both fan and foe, he had a large impact on the world’s greatest country. He was extraordinarily funny. He was beloved. Few people die only to leave many millions with a substantial void in their lives. Rush Limbaugh did just that. We lost a great man.

John Tamny is editor of RealClearMarkets, vice president at FreedomWorks, and a senior economic adviser to Toreador Research and Trading. His new book is titled “When Politicians Panicked: The New Coronavirus, Expert Opinion, and a Tragic Lapse of Reason.” Other books by Tamny include “They’re Both Wrong: A Policy Guide for America’s Frustrated Independent Thinkers,” “The End of Work,” and “Who Needs the Fed?” He can be reached at jtamny@realclearmarkets.com.