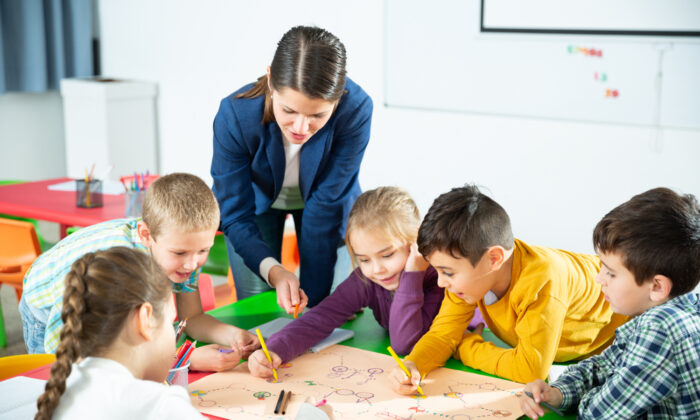 Religious exemptions for vaccines are a protected right for parents who choose to not vaccinate their children. (Shutterstock)
Health News

How often do students and employees claim vaccine mandates conflict with their religious beliefs? What are schools doing to discourage exemptions to required childhood vaccines? We look at the research.
By Denise-Marie Ordway

Even before some California school districts ordered students in certain age groups to get immunized against COVID-19, research showed the percentage of kindergarteners whose parents claim vaccines conflict with their religious beliefs was on the rise.

Schools, employers and higher education institutions with vaccination mandates typically permit exemptions based on religion or medical reasons. In many states, public and private schools serving kids in kindergarten through 12th grade also allow exemptions based on personal beliefs or philosophies, which generally, allow parents to opt out of vaccines simply because they oppose them.

Research, However, Suggests that Banning one Type of Exemption Leads to an Increase in Another.

The authors of that paper note that after Vermont eliminated personal belief exemptions in schools in 2016, the share of kindergartners with religious exemptions increased sevenfold to 3.7%. Scholars call this a “replacement effect,” meaning families seek a different exemption when the type they had been using no longer is available.

“Religious exemptions may be an increasingly problematic or outdated exemption category, and researchers and policy makers must work together to determine how best to balance a respect for religious liberty with the need to protect public health,” write the authors, led by Joshua T. B. Williams, a pediatrician at Denver Health Medical Center and assistant professor of pediatrics at the University of Colorado, School of Medicine.

Researchers from Emory University in Atlanta found evidence of a replacement effect when schools prohibit all “nonmedical” exemptions, an umbrella term that applies to religious, philosophical and personal belief exemptions. In 2016, California enacted a law banning nonmedical exemptions in schools. By the second year, medical exemption rates jumped.

“The unintended consequence of an increase in medical exemption rates, which notably tripled in California, highlights a potential pitfall with this approach,” researchers write in the Expert Review of Vaccines in 2019.

They add that it appears students’ parents and legal guardians “may seek out physicians who are more willing to attest to medical contraindications in the absence of a non-medical exemptions allowance.”

In the wake of the coronavirus pandemic, an increasing number of schools and higher education institutions are ordering students to get inoculated against COVID-19. Dozens of companies, including Delta Airlines, Facebook, Uber and Walmart, have mandated COVID-19 vaccinations for employees.

Immediately after mandates were announced, students and employees started seeking religious and medical exemptions, even as high-ranking faith leaders worldwide urge people to get their shots.

This week, the Los Angeles Police Department drew criticism after news outlets reported that 2,651 of its employees plan to file for religious exemptions to its new vaccine requirement.

In Oregon, 2,284 state employees requested exemptions to the governor’s COVID-19 vaccine mandate, about 5% of the 42,000 employees affected by the requirement. About, 90% of those requests were for religious exemptions.

Administrators at hospitals and nursing homes across the country worry the new immunization requirement will lead to staffing shortages as some employees might quit or let themselves be fired rather than get COVID-19 shots. Earlier this month, a hospital in upstate New York announced it planned to shut down its maternity ward because dozens of staff members quit over the vaccine mandate.

The evidence to date suggests:

Denise-Marie Ordway joined The Journalist’s Resource in 2015 after working as a reporter for newspapers and radio stations in the U.S. and Central America, including the Orlando Sentinel and Philadelphia Inquirer. Her work also has appeared in publications such as USA TODAY, the New York Times, Chicago Tribune and Washington Post.

This story originally published in the Journalist’s Resource Blog.