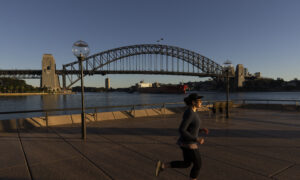 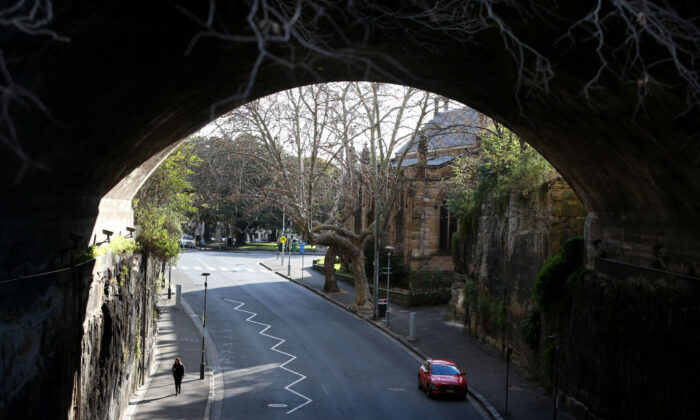 A person walks along a quiet street in the usually bustling area of The Rocks in Sydney, Australia, on July 07, 2021. (Lisa Maree Williams/Getty Images)
Australia

The week-long lockdown for three regional New South Wales (NSW) towns are being lifted, releasing 60,000 people from the stay-at-home restrictions.

The towns were plunged into a snap lockdown on July 20 after a visiting Sydney delivery driver infected a local factory worker who then attended multiple venues.

“There has been no further transmission of COVID-19 detected in the region,” NSW Health said.

It comes after the six-week COVID-19 cluster in Greater Sydney and surrounds after NSW reached a new milestone with 172 new locally acquired COVID-19 cases in the 24 hours to 8 p.m. on Monday which is a rise of 27 cases from Monday.

At least 79 of those people were active in the community for all or part of their infectious period.

Two women in their 80s died in Sydney on Monday after being infected by their household contacts, Premier Gladys Berejiklian said, confirming that neither woman was vaccinated.

“A lot of people have died because someone very close to them has brought the disease home to them…. we don’t want to see more of that,” she said.

She again urged people to play by the rules and get vaccinated to protect their friends and family.

Ten people have died during the outbreak, which began in mid-June. They include a 38-year-old woman with no pre-existing conditions.

The numbers of COVID-19 patients in hospital are rising rapidly, now at 169—up from 156 in the previous 24-hours.

Some 46 people are in intensive care, 19 of whom are ventilated.

A multi-storey apartment block in western Sydney has been locked down with a police guard to enforce two weeks of quarantine after six cases of COVID-19 were detected amongst three associated households in the building.

Around 100 people living in the five-storey, 50-unit building are being tested after the first case was diagnosed in a resident in the Blacktown building on Monday.

Authorities said they are “very concerned” about the block but are so far not aware of transmission beyond those three households, NSW Health’s Jeremy McAnulty said.

All residents are considered close contacts.

Authorities are working with residents and building management on infection control and to ensure the residents’ health and welfare.

“Food and other services, including daily welfare checks, will be provided to residents safely during their 14-day quarantine period,” the Western Sydney Local Health District said.

“Tailored support services will be provided to all isolated residents as needed.”

One resident who has so far tested negative said the building was surrounded by police, media camera crews and security guards.

Blacktown is one of the local government areas at the epicentre of Sydney’s COVID outbreak and non-essential workers cannot leave, even for work.

A popular shopping centre in Sydney’s southwest is concerning authorities after it was listed as a close contact venue for eleven consecutive days.

Greater Sydney and surrounding regions are in lockdown until at least July 30, as health authorities battle to contain an outbreak of the virulent Delta strain.

The premier promised an update on what restrictions will be in place after that date as soon as Wednesday.