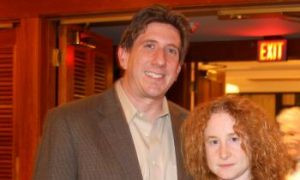 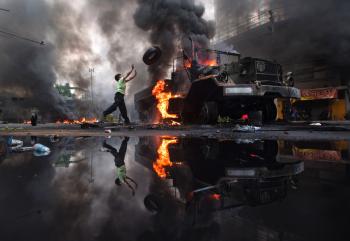 An anti-government protester 'Red Shirt' throws a tire toward a burned truck as the violence in central Bangkok continues on May 16, in Bangkok, Thailand. (Athit Perawongmetha/Getty Images)
World

Two construction vehicles made further inroads to reduce the barricade so Thai soldiers could make their way towards the massive red shirt camp a half a mile ahead.

The 100-or-so soldiers were relatively relaxed; leaders of the protest red shirt movement—more formally known as United Front for Democracy against Dictatorship (UDD)—surrendered an hour-and-a-half earlier, effectively halting the Thai military’s assault from the southern area of the encampment, and avoiding what many believed was going to be a bloodbath.

As the two construction vehicles continued their work, soldiers missed (or failed to act upon) a small quick burning plume of smoke that was emerging from an intact part of the barricade. Quickly the smoke became a fire and then a series of small explosions, which ended with one big bang from either a grenade or a gas cylinder.

While there were no casualties, the booby-trap stalled the military’s momentum, and a bottle neck of media representatives formed along with the bizarre phenomena of a dozen male western tourists, backpackers or expats (or various ages and social standing) who wanted to come along for a look.

As a bomb disposal soldier gave the thumbs up and the troops began to move forward, a foreigner on a bicycle came from the opposite direction after having spent the last 20 days inside the protester’s camp.

“People (protesters) got angry at their leadership when they announced they were surrendering,” said Chris, a 37-year-old German student who preferred to withhold his surname.

“Immediately after the leaders said ‘we will stop and go home’ then the army [attacking from the south] seemed to stop everywhere—the army just stopped shooting,” he said adding that most of the protesters were now seeking shelter in a Buddhist temple.

Using armored cars, the army began their offensive at dawn from the Silom end of the protesters’ fortified encampment and fought their way towards the center stage situated at the Ratchaprasong intersection. No less than five people were killed, one of them an Italian journalist.

Chris said the fighting stopped short of reaching the intersection where the red shirts’ stage was and he did not see anyone being shot, unlike two days earlier when he witnessed a teenage boy shot by soldiers for throwing a firecracker. A near state of urban warfare erupted late last week between the red shirts and the military.

Inside the camp, the troops who had just arrived were doing a small mopping up operation in the area which previously was best known for its ritzy high-end shopping centers and hotels. The red shirts had held this area hostage since April 5, as part of their bid to force Thai Prime Minister Abhisit Vejjajiva to dissolve the Thai Parliament and call an early election.