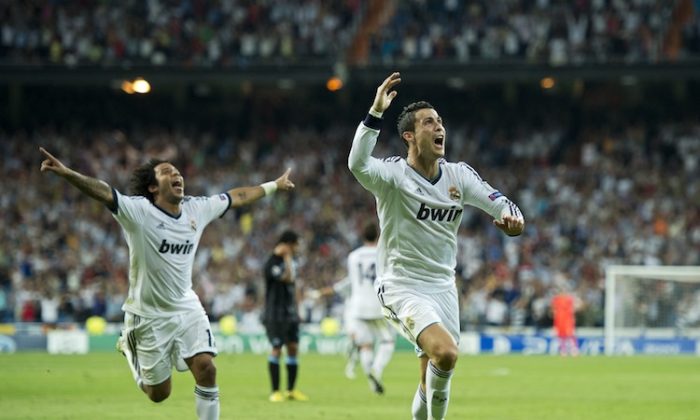 Cristiano Ronaldo was feeling sad no longer as he struck a 90th minute winner for Real Madrid in their opening Champions League encounter with English champions Manchester City at the Santiago Bernabeu Stadium on Tuesday.

Real dominated proceedings for the first hour without managing to create much in the way of clear-cut opportunities, yet Roberto Mancini’s side took the lead, against the run of play on 68 minutes. Madrid equalized, but City went ahead again before a storming finish from Jose Mourinho’s side turned it around with two late goals.

Madrid’s Portuguese manager had earlier surprised everyone by dropping Spanish international Sergio Ramos whose place at center back was taken by Raphael Varane. Argentine Angel Di Maria was preferred to Mesut Ozil with Karim Benzema and Luka Modric joining the German international on a star-studded Madrid bench.

Mancini sprang a few surprises of his own with Matija Nastasic making his debut in preference to Joleon Lescott, and Javi Garcia selected in a five-man midfield. Carlos Tevez was asked to play a lone hand up front with Sergio Aguero and Edin Dzeko both starting on the bench where there was no place for either James Milner or Mario Balotelli.

Real Madrid took control of the game from the outset and dominated play with City barely able to get out of its own half for long periods. However, the Spanish club was unable to translate their possession into goals.

The best they could muster came as early as the ninth minute when a trademark Ronaldo cut inside from the left was followed by the usual right-footed drive, which required a smart save from Joe Hart low down to his left.

The next opportunity did not arrive until five minutes before the break when a searching cross from Di Maria found Gonzalo Higuain, but the striker could only volley over the top when he should have opened Real’s account.

City came out for the second half looking determined to deny Real the midfield dominance they had enjoyed throughout the first period and Garcia was duly booked just seven minutes in. The visitors were certainly showing more steel, but it was hard to see how they were ever going to score a goal.

With Samir Nasri having limped off injured at the 36-minute mark to be replaced by a defender in Aleksander Kolarov, and David Silva largely ineffective, their best option looked to be one of Yaya Toure’s charges down the middle.

At the 68-minute mark that was exactly what happened. Toure fought for the ball at the back, won it, and thundered forward. He played a simple ball to substitute Dzeko and the Bosnian did the rest to put City a goal to the good. It was the visitors’ first meaningful attack of the contest.

Real were now in panic mode and Modric was introduced along with Karim Benzema in place of Sami Khedira and Higuain. Ozil had already replaced Michael Essien.

Just three minutes later Madrid was on level terms. Marcelo was fed the ball on the left flank, took it inside and fired a curling shot which beat Hart high to the keeper’s left, possibly with the aid of a slight deflection.

That was on 76 minutes. A couple of minutes later, Benzema brought a great save from Hart with a fiercely struck drive from a tight angle, and Manchester City’s keeper again came to the rescue as Modric fired one in.

But City was not done yet and for the second time produced a goal out of next to nothing. On 85 minutes, they were awarded a free kick way out on the right flank.

Dead ball specialist Kolarov took it and although his fairly weak attempt was clearly meant to be a cross rather than a shot, it beat everyone and somehow found its way into the back of the Real net.

Notwithstanding this second setback, Mourinho’s men piled on the pressure. Three minutes from the end of normal time Benzema was given a little too much room on the edge of the box by Nastasic who allowed the Frenchman to turn and slide the ball between Hart’s outstretched fingers and the foot of his left-hand post.

As full-time approached, man of the match Hart saved yet again—this time at the feet of Ozil. With 90 minutes on the clock, Ronaldo cut inside from the left for the umpteenth time, but on this occasion Hart seemed to be slightly wrong-footed and Ronaldo’s shot nestled in the back of the net.

Football can be a cruel game and it was unfortunate that Hart must be called to account for Ronaldo’s winning goal after putting in such a stalwart display for virtually the entire match. Nonetheless, on the balance of play it cannot be denied that Real deserved the points and they have the start to the campaign that they wanted, while it is back to the drawing board for Roberto Mancini and Manchester City.

After his now famous “I have no team” quote after losing to Sevilla last Saturday, Mourinho likely feels that he has a team again given his exuberant celebration after Ronaldo’s winner.