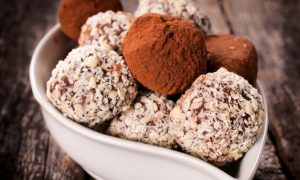 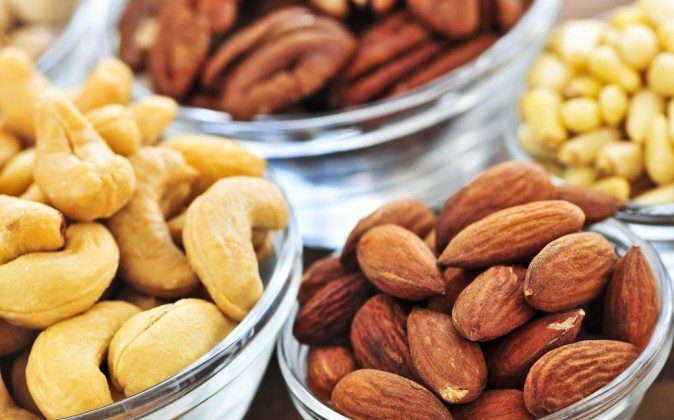 Many studies have shown that cooking foods increases their caloric value by increasing the absorption of starches and proteins. Now a new study from Harvard shows how cooking also increases the absorption of fat that you eat. In this study, mice fed cooked peanuts absorbed significantly more calories from fat than those eating the same amount of raw peanuts.

Fat contains more than twice the calories per gram than carbohydrates or proteins do, yet a recent study suggests that nuts are not fattening, even though more than 80 percent of their calories come from fat (see Why Nuts Won’t Make You Fat) The new study from Harvard, conducted under the direction of anthropologist Dr. Richard Wrangham, shows that raw nuts are even less fattening than cooked nuts.

• The fat in raw nuts is inside cells. Humans lack the enzymes to break down fat cell walls, and you have to liberate fat from inside cells to absorb it into your body.
• The fats in nuts are coated with proteins called oleosins that also prevent fat from being absorbed.

Thus most of the fat in nuts is not absorbed. However, cooking helps to break down the cellulose that makes up cell walls, and it also breaks down the oleosins which coat fat, to allow the fat to be absorbed at a much higher rate.

Details of This Study

The authors fed groups of 20 mice each, peanuts prepared: 1) raw and whole, 2) raw and blended, 3) roasted and whole, or 4) roasted and blended. Compared to raw, the cooked peanuts:
• markedly increased absorption of fat,
• produced a lower percentage of fat lost in the stool,
• broke down the fat cell walls, and
• reduced the oleosin fat-covering protein.

How Cooking May Have Changed the Human Race

Ancient humans lived an average age of 12 years, which allowed them only to reproduce and then die. According to Dr. Wrangham, this began to change when humans discovered how to cook their food, so they had enough calories to live longer and develop larger brains. For example, a raw potato supplies almost no calories, but a cooked potato gives you more than 150 calories. A raw egg supplies fewer than 50 calories while a cooked egg provides more than 80 calories. Human brains are 4.6 times larger than those of other similarly-sized mammals, and require 16 percent of our total calories to function. This huge human brain takes far longer than brains of other animals to mature, so to procreate, a human mother needs a tremendous amount of calories to support herself for nine months of pregnancy, two or more years of breast milk feeding, and extended time to protect her helpless offspring. Without cooking, humans would not be what they are today. They have relatively small mouths, jaws, and teeth and a limited gut length compared to other primates to absorb foods, Other anthropologists disagree with Dr. Wrangham and advance the “hunter” theory, where mastery of tools introduced meat into the human diet, but Dr. Wrangham believes that hunting did not provide enough calories until they learned how to cook meat. It takes large amounts of calories and high levels of fitness to hunt with rudimentary weapons. Furthermore, humans absorb raw meat very poorly because they have blunt molar teeth that are inefficient in chewing animal meat. Dr Wrangham feels that cooking gave humans larger brains because it allows them to extract more calories from fats, carbohydrates and proteins. For more on Dr. Wrangham’s work see Cooking and Human Evolution

How to Stay Warm on Raw Foods

The Rise and Rise of Raw Food Diets

Too Much, Not Too Little

Today, western societies suffer from far too much food, not too little. More than 75 percent of North Americans are too fat and many will develop diabetes and suffer heart attacks because of excess calories. Studies such as this one can help us to select foods that are satisfying and nutrient rich but reduce total calories. To help protect you from gaining too much fat:

• Eat large amounts of raw, unprocessed fruits, vegetables, nuts and seeds and whole (un-ground) grains. Fruits and vegetables have most of their calories in starches and fibers that are difficult to break down and absorb. Heat gelatinizes intracellular starch. It splits the hydrogen bonds that hold sugar molecules together and release sugars that are easily absorbed. Cooking starches markedly increases the calories that you get from them. Nuts and seeds have their fat stored inside cells that is difficult to absorb unless you grind and cook them. Whole grains and other seeds are capsules that are not easily broken down in your body. Once whole grains or other seeds are ground into flour, the protective capsule is lost, providing more calories and freed sugars.

• Restrict cooked, ground and processed meats. If you eat meat, the higher the temperature of cooking, the greater the increase in calories that you absorb. Cooking meat kills germs to help protect you from terrible infections, but it increases fat molecules’ surface area, to make it far more accessible to bile acids in the small intestine to increase the absorption of fat from meat to give you more calories. Cooking animal protein breaks down the resistant collagen fibers that start to be broken down only when they are heated beyond 60 to 70 degrees C (140-158 F).

• When you prepare cooked foods, use water-based cooking methods most of the time (steaming, simmering, stewing, cooking in soups and gravies). Cooking without water (frying, broiling, grilling) allows sugar to attach to proteins and nucleic acids to form Advanced Glaciation Endproducts (AGEs) which are known carcinogens and increase risk for diabetes. See AGEs Increase Diabetes Risk

*Image of “nuts” via Shutterstock