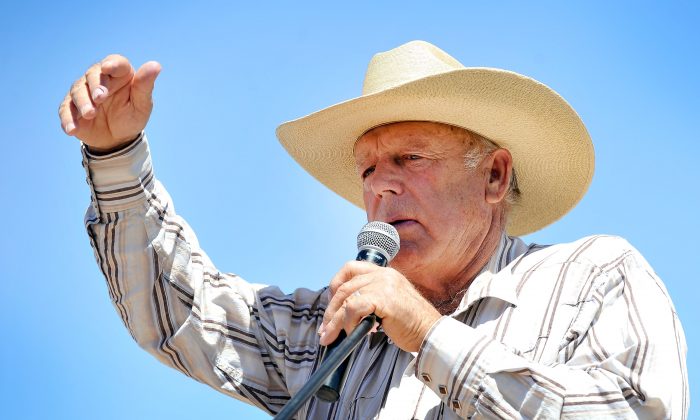 Rancher Cliven Bundy speaks during a news conference near his ranch in Bunkerville, Nev., on April 24, 2014. The Bureau of Land Management and Bundy have been locked in a dispute for a couple of decades over grazing rights on public lands. (David Becker/Getty Images)
US

CARSON CITY, Nev.—Nevada rancher Cliven Bundy, who garnered national attention a year ago when he and armed supporters engaged in a showdown with federal authorities, has arrived in Carson City with scores of allies to rally behind a bill seeking to reclaim land from the federal government.

Bundy’s son, Ammon Bundy, said a bus from Phoenix and another from Las Vegas brought more than 100 people, and others were coming on their own to a Tuesday afternoon hearing.

The bill is part of a larger movement challenging federal government property rights, especially in Western states such as Nevada, where federal and military agencies control more than 85 percent of the land. The Bureau of Land Management is charged with balancing environmental and recreational goals with economic development on the lands, which include national parks. The department’s priorities in certain situations can anger residents.

Eleven western states have introduced bills this year on the matter, and AB408 is the most extreme, according to Jessica Goad of the Denver-based conservation group Center for Western Priorities. The bill asserts the federal government has no right to the lands, while other bills merely call for a study on federal land ownership or demand the federal government turn over the lands.

Such measures are routinely considered unconstitutional, even when they pass.

Cliven Bundy has said he doesn’t recognize federal authority on the land near Bunkerville that his family settled and has used since the late 1870s.

BLM officials have accused him of failing to pay grazing fees for 20 years, racking up more than $1.1 million in fees and penalties, and failing to abide by court orders to remove his cattle from vast open range that is habitat for the endangered desert tortoise.

His standoff with the federal government and Bureau of Land Management last year attracted out-of-state militia members and was called off by federal agents on April 12, amid fears of a shootout. He’s lauded as a hero among certain conservatives, including bill sponsor Fiore.

But critics raise serious concerns about the bill. The state’s legislative counsel bureau said the proposal was “manifestly hostile” to the federal government and would be struck down if challenged in court for attempting to put state law ahead of federal law.

Counsel researcher Brenda Erdoes wrote that the bill would “handicap and interfere with the efforts of federal agencies to carry out federal laws enacted for a national purpose.”

Nevada’s state conservation department estimated that transferring around 60 million acres of federally controlled land would cost the department around $95 million and that the parceling process for mining, logging and other industries could become “complicated and controversial.”

Plenty of crowd control measures were in place for the Tuesday hearing, according to Assembly Majority Leader Paul Anderson, a Republican. Capitol and local police were apprised of the situation, he said, and other meetings had been pushed back to accommodate a long hearing. The discussion was scheduled to take place in the largest room in the legislative building.

Several progressive groups and Democratic officials including Sen. Kelvin Atkinson and Assemblywoman Teresa Benitez Thompson plan to rally outside the Legislature on Tuesday against the bill.

Opponents, including Battle Born Progress director Jocelyn Torres, say the measure would take land access out of the hands of everyday Nevadans.

“Federal lands belong to everyone, and they’re limiting it to folks who can buy these lands and exploit them,” she said. “If it’s unconstitutional, it will get stopped at some point.”