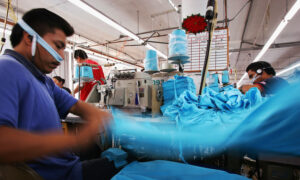 Rains Could Help California Firefight but Complicate Search for Remains

SACRAMENTO, Calif.—Rain in the forecast starting on Nov. 21, could aid crews fighting California’s deadly wildfires while raising the risk of flash floods and complicating efforts to recover remains of those killed.

Residents in communities charred by the Los Angeles-area fire stacked sandbags as they prepared for possible downpours that threatened to unleash runoff from hillsides left barren by flames.

In Northern California, teams continued sifting through ash and debris as they searched for bodies in and around the decimated town of Paradise.

“The task is arduous,” said Rick Crawford with the California Department of Forestry and Fire Protection. “And the possibility exists that some people may never be found.”

With the death toll at 81 in the state’s most destructive wildfire, there are still nearly 870 people still unaccounted for.

Authorities trying to identify the scores of people killed are using rapid DNA testing that produces results in just two hours. The system can analyze DNA from bone fragments or other remains, then match it to genetic material provided by relatives of the missing. But the technology depends on people coming forward to give a DNA sample via a cheek swab, and so far, there are not nearly as many volunteers as authorities had hoped for.

As of Tuesday, nearly two weeks after the inferno, only about 60 people had provided samples to pop-up labs, said Annette Mattern, a spokeswoman for ANDE, the Longmont, Colorado, company that is donating the technology.

“We need hundreds,” Mattern said. “We need a big enough sample for us to make a positive ID on these and to also give a better idea of how many losses there actually are.”

The burned area surrounding Paradise, which is about 140 miles northwest of San Francisco, will see rain starting Wednesday. The precipitation could help knock out the flames, but it could also hinder the search by washing away fragmentary remains and turning ash into a thick paste.

The National Weather Service issued a flash flood watch for Paradise and nearby communities and for those areas charred by wildfires earlier this year in Lake, Shasta, Trinity and Mendocino counties.

The Camp Fire, which has burned an area about the size of the city of Chicago—nearly 238 square miles—and destroyed around 13,000 homes, was 75 percent contained on Tuesday.

In Southern California, people who worried days earlier that their homes might be consumed by flames were now taking action to guard against possible debris flows caused by the Pacific storm set to come ashore the day before Thanksgiving. Residents filling sandbags at Malibu’s famous Zuma Beach were mindful of the disaster that struck less than a year ago when a downpour on a fresh burn scar up the coast sent home-smashing debris flows through Montecito, killing 21 people and leaving two missing.

The 151-square-mile Woolsey Fire was almost entirely contained, with 1,500 buildings destroyed and 341 damaged. The major remaining closed area was centered in the rugged Santa Monica Mountains that rise high above the Malibu coast.