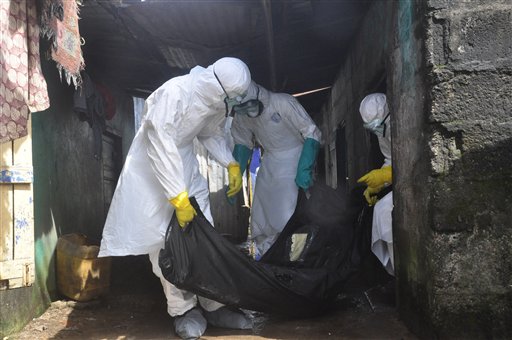 Health workers in protective gear remove the body of a woman suspected to have died from the Ebola virus, near the area of Freeport in Monrovia, Liberia. (AP Photo/Abbas Dulleh)
Ebola

Quarantine, in the form of isolation, is an important component of the response to Ebola infection. As people are infectious only once they develop symptoms, isolating them and having health-care workers use personal protective equipment significantly reduces the risk of onward transmission.

The director of the US Centers for Disease Control and Prevention (CDC) says the man will continue to be treated in isolation. In a process known as contact tracing, everyone he has come in contact with since he became symptomatic on September 24 will be located and monitored for 21 days (the maximum incubation period of the virus). Anyone who shows symptoms will also be isolated and treated.

The Ebola virus is unlikely to spread further in the United States because these measures are known to be effective. Indeed, their absence has contributed significantly to the spread of the virus in resource-poor nations of West Africa.

The Benefits of Quarantine

Countries have been practising this measure against infectious diseases well before we understood what caused and transmitted infections. The earliest mention of isolating people in this way is in the books of the Old Testament, for leprosy and other skin diseases.

The word “quarantine” comes from the Italian “quaranta giorni” which simply means “40 days”. It refers to the 40-day isolation period imposed by the Great Council of the City of Ragusa (modern day Dubrovnik, Croatia) in 1377 on any visitors from areas where the Black Death was endemic. In its most basic form, quarantine is the isolation of people with a disease from unaffected people.

The measure has clear benefits; it was effective during the 2003 pandemic of SARS-coronavirus when the isolation of cases and their contacts for ten days was arguably one of the most significant interventions for containing the outbreak in only five months.

And it has frequently been used to control Ebola outbreaks. Since the virus’ first and most severe outbreak in 2000, Uganda has used quarantine measures to good effect, isolating contacts of cases for up to the 21 days of the viral incubation period.

Surveillance, a more Ebola-educated populace and targeted quarantine measures have meant Uganda had only 149 cases with 37 deaths, one case and death, and 31 cases with 21 deaths in subsequent outbreaks in 2007, 2011 and 2012.

Nigeria has also demonstrated the efficacy of a contact tracing and isolation approach. Despite being one of the most populous countries in Africa and having cases introduced into Lagos, a city of 21 million people, its last case was seen on September 5.

Removing infected and potentially infectious people from the community clearly helps reduce the spread of disease, but it still requires a place for people to be isolated and treated. That’s what’s missing in countries still in the midst of the epidemic, and also what continues to drive it.

Too Much of a Good Thing

While quarantine is an important weapon in our arsenal against Ebola, indiscriminate isolation is counterproductive.

Still, this didn’t stop Sierra Leone from imposing a stay-at-home curfew for all of its 6.2 million citizens for three days from September 19 to 21. Results from this unprecedented lockdown are unverified, with reports of between 130 and 350 new suspect cases being identified and 265 corpses found. But in a country where the majority of people live from hand to mouth with no reserves of food, the true hardship of the measure is difficult to quantify.

In addition to the three-day lockdown, two eastern districts have been in indefinite quarantine since the beginning of August. On September 26, Sierra Leone’s president, Ernest Bai Koroma, announced that the two northern districts of Port Loko and Bombali, together with the southern district of Moyamba, will also be sealed off. This means more than a third of the country’s population will be unable to move at will.

Sierra Leone’s excessive quarantine measures are having a significant impact on the movement of food and other resources around the country, as well as on mining operations in Port Loko that are critical for the economy.

The country had one of Africa’s fastest-growing economies before the outbreak, with the IMF predicting growth of 14%. The World Bank estimates the outbreak will cost 3.3% of its GDP this year, with an additional loss of 1.2% to 8.9% next year.

Rice and maize harvests are due to take place between October and December. There’s a significant risk that the ongoing quarantines will have a significant impact on food production.

Quarantine is an excellent measure for containing infectious disease outbreaks but its indiscriminate and widespread use will compound this epidemic with another humanitarian disaster.

Grant Hill-Cawthorne does not work for, consult to, own shares in or receive funding from any company or organisation that would benefit from this article, and has no relevant affiliations. This article was originally published on The Conversation. Read the original article.