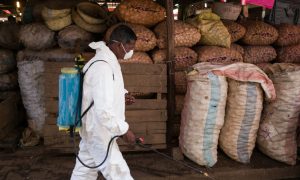 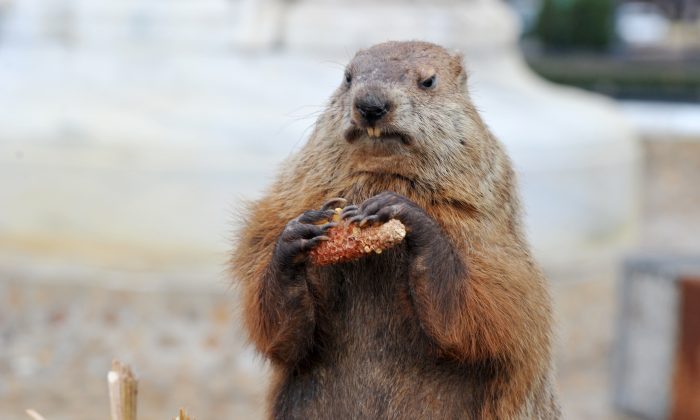 Potomac Phil, a taxidermied version of the groundhog brought out to determine whether or not he sees his shadow sits near by in Washington, on Feb. 2, 2012. (Karen Bleier/AFP/Getty Images)
Health News

A quarantine imposed in parts of Mongolia after a couple died of the bubonic plague has now been lifted, according to reports.

Authorities earlier declared a six-day quarantine on May 1 in Mongolia’s western Bayan Olgii Province, according to the BBC, following the deaths of two people who contracted the deadly disease after eating raw marmot meat.

Marmots are large squirrels of the Marmota genus, known for communicating in whistles. Raw meat from the animal is thought in some cultures to be a folk remedy for relieving ailments.

The ethnic Kazakh couple died on May 1, according to the Guardian, with authorities indicating the cause of death as the bubonic plague. The disease is the same kind that killed millions in Europe and Asia in previous centuries.

Ariuntuya Ochirpurev of the World Health Organization (WHO) told the BBC that the couple had eaten raw marmot meat and kidney.

Euronews identified the victims only as in their thirties.

The Siberian Times reported that a senior official from the National Centre for Zoonotic Dermatology and Medicine said that the unnamed victim ate meat from the rodent “despite the fact that eating marmots is banned.”

“He ate the meat and gave it to his wife, and they died because the plague affected his stomach,” Dr. N.Tsogbadrakh said, according to The Times. “Four children are orphaned.”

Alert on Russian border with Mongolia after two deaths from ‘bubonic plague’. Russian tourists stuck in western Mongolia after closure of frontier to stop spread of infection.https://t.co/tAKAHfIZTg#plague #Mongolia pic.twitter.com/WxORlWZ8NG

The quarantine stranded a number of European tourists from Russia, Switzerland, the Netherlands, and Germany, according to Euronews.

Euronews reported that flights into the city were diverted or canceled, and a border crossing between Mongolia and Russia was closed.

Dear passengers, because of quarantine in Bayan Ulgii aimag flights to this province dated May 02 and May 04 are cancelled.
You can refund tickets or make day changes without any charges
Contact number – 7000-1111
email – info@hunnuair.com

Mongolia’s Health Ministry said in a statement that 124 people had been given antibiotics, adding that doctors who examined them found no evidence of bubonic plague symptoms.

One of those allegedly stranded was Russian national Evgeny Viluzhanin, who wrote on Facebook: “thanks to the woolly fat hamster, I had to spend three days in the city of Ulgii.”

According to the National Organization for Rare Disorders (NORD), “plague is an acute, severe infectious disease caused by the bacterium Yersinia pestis. The bacterium is found in fleas and wild rodents such as rats, squirrels, chipmunks or prairie dogs.”

While human cases of bubonic plague are rare, each year in Mongolia at least one person dies of the disease, according to the Centers for Disease Control and Prevention (CDC).

While potentially deadly, the plague can be treated with antibiotics.

Plague in the United States

According to the CDC, the “plague was first introduced into the United States in 1900, by rat-infested steamships that had sailed from affected areas, mostly from Asia. Epidemics occurred in port cities.”

The CDC notes that the last urban plague epidemic in the United States took place in Los Angeles in the mid-1920s.

“Plague then spread from urban rats to rural rodent species,” the CDC states, adding that hotspots of the disease have been noted in parts of the western United States, mostly in rural areas.

“Almost all of the cases reported in the last 20 years have occurred among people living in small towns and villages or agricultural areas rather than in larger towns and cities,” the CDC states.

Seven cases of plague infection per year on average have been reported in the U.S. in recent decades.

The disease affects people of all ages.

The third most common cause of death in the United States was unintentional injury.

“The most common unintentional injuries result from motor vehicle crashes, falls, fires and burns, drowning, poisonings, and aspirations,” according to the CDC.