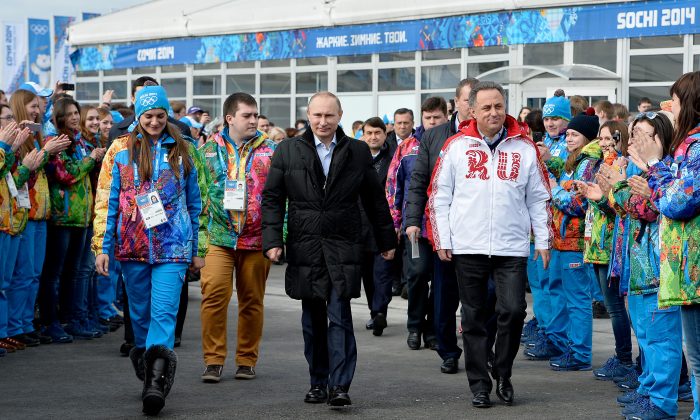 MOSCOW—Russian President Vladimir Putin hit out at “discrimination” against the country’s banned track and field athletes at a Kremlin send-off ceremony Wednesday for its depleted Olympic team.

Fencers became the latest team of Russians to be cleared to compete in the Olympics by their sport’s governing body ahead of the Moscow ceremony, but the IAAF rejected a bid by the bulk of the track and field team to be reinstated.

More than 100 Russians from the 387-strong Olympic team have been banned so far from going to Rio de Janeiro.

“We can’t accept indiscriminate disqualification of our athletes with an absolutely clean doping history,” Putin said. “We cannot and will not accept what in fact is pure discrimination.”

Fighting back tears, Isinbayeva told Rio-bound Russian athletes: “Show them what you’re able to do—for yourself and for us too.”

As the athletes walked across Red Square to meet Putin, some posed for selfies with Vitality Mutko, whose sports ministry was accused by the World Anti-Doping Agency of orchestrating the doping program. The sports minister has been blocked by the International Olympic Committee from attending the games next month but he remains in Putin’s government.

The IAAF is the only sport to impose a near-blanket ban on Russians, only deeming one—long jumper Darya Klishina—eligible for Rio.

“The situation went beyond the legal field as well as common sense,” Putin told the audience, including many of the banned athletes. “It’s a well-planned campaign which targeted our athletes, which included double-standards and the concept of collective punishment which has nothing to do with justice or even basic legal norms.

“Not only have our athletes who never faced any specific accusations been hurt—this is a blow to the entire global sports and the Olympic Games. Clearly, the absence of Russian athletes who were leaders in some of the sports, will affect the competition.”

There was positive news, however, from Putin’s ally, Alisher Usmanov, the Russian billionaire who is president of the International Fencing Federation.

The governing body said it would allow the 16 Russian fencers who have qualified for the Rio Games to compete and it approved four reserves. The decision came after the FIE said it had re-examined 197 tests taken from Russian fencers in 35 countries over the last two years which all came back negative.

WADA investigator Richard McLaren reported last week that four positive doping tests in Russian fencing disappeared in recent years. The FIE did not respond to questions from The Associated Press about whether McLaren’s evidence was considered before deciding to allow Russian fencers to compete in Rio.

Russian entries to the Olympics must still be examined and upheld by an expert from the Court of Arbitration for Sport.

The International Gymnastics Federation said it has established a “pool of eligible Russian athletes” and is awaiting IOC approval.

Individual sports federations were given the task of deciding which athletes should be cleared to compete in Rio by the International Olympic Committee on Sunday. In his native Germany, IOC President Thomas Bach is facing increasing criticism for failing to impose a complete ban on Russia’s team.