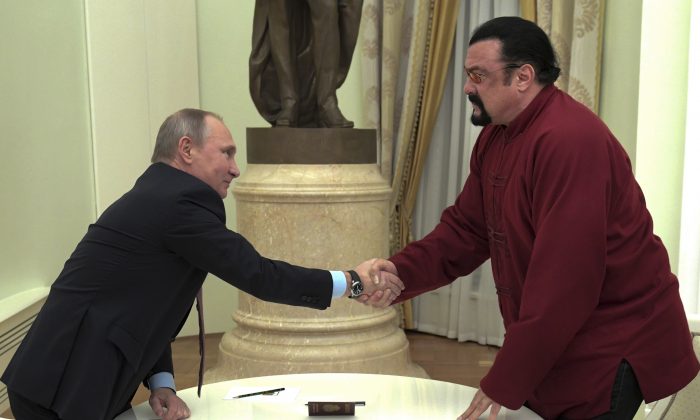 Russian President Vladimir Putin shakes hands with U.S. actor Steven Seagal in the Kremlin in Moscow on Nov. 25, 2016. Putin has given a Russian passport to Seagal, a regular visitor to Russia in recent years, calling it a sign of a thaw in relations between the two countries. (Alexei Druzhinin/Sputnik, Kremlin Pool Photo via AP)
International

MOSCOW—President Vladimir Putin has given a Russian passport to U.S. action film star Steven Seagal, calling it a sign of a thaw in relations with the United States.

The 64-year old actor has been a regular visitor to Russia in recent years and has accompanied Putin to several martial arts events.

After awarding Seagal citizenship through a presidential decree earlier this month, Putin hosted the actor at the Kremlin on Friday and handed him the passport.

Putin told Seagal he hopes the ceremony, which was shown on Russian state television, is “also a sign of a gradual normalization of the relations between the countries.”