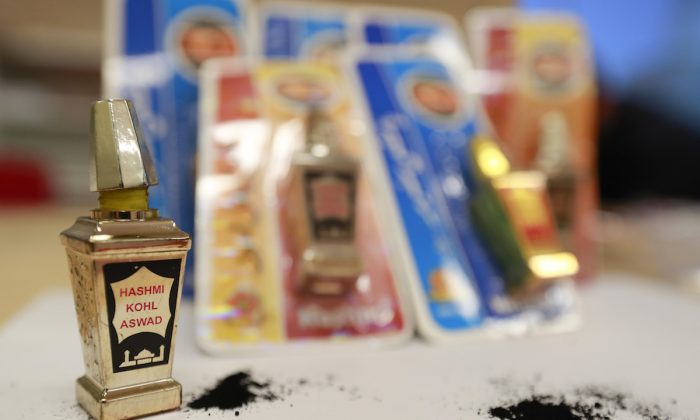 The NSW government issued a public warning on July 24, 2018, about an imported cosmetic eye liner that has dangerous levels of lead and has been linked to three children becoming sick. (NSW Government)
Health News

The NSW Government issued a public warning about a brand of eyeliner on July 24 after tests showed increased levels of lead in the Hashmi branded products.

Testing of the imported eyeliners Hashmi Surmi Special and Hashmi Kohl Aswad yielded 84 percent lead content, alongside other harmful metals. Arsenic, cadmium, chromium, and mercury were among those identified, according to a press release. The Hashmi eyeliners are manufactured in Pakistan.

The discovery came after three children from the same family became sick from using the eye makeup. Doctors found elevated lead levels in their bloodstream upon testing and notified the local public health unit in Western Sydney, Minister for Better Regulation Matt Kean said in the press release.

NSW Health said people should stop using the products and seek medical advice from their doctor as soon as possible.

“An investigation indicated the health concerns were likely to have been caused by one of the Hashmi brand eyeliners,” Kean said.

NSW Fair Trading has since referred the products to the Australian Border Force.

According to Kean, the products are mainly sold in stores that stock Indian and Pakistani goods.

“Some of the product packaging even specifically states that no lead is present, which is a total disgrace,” Kean said. “I’m absolutely appalled by this as we know that use of cosmetics containing lead can have long-term health effects, including brain and kidney damage in both adults and children.”

New York City Health and the U.S. Food and Drug Administration had previously warned the public against the use of kohl—Arabic for traditional lead-based eye makeup, also known as kajal or surma depending on the region—that is found in the above-mentioned brands.

In 2010, a letter to the editor featured in the Oman Journal of Ophthalmology called for greater public awareness about the health risks of the ‘dangerous cosmetic’ kajal.

“Prolonged application may cause excessive lead storage in the body, affecting the brain and bone marrow, causing convulsions and anemia.

“Despite recommendations against the use of kajal, it is routinely used in children. It is necessary that the health care providers should educate the parents regarding the use of kajal.”