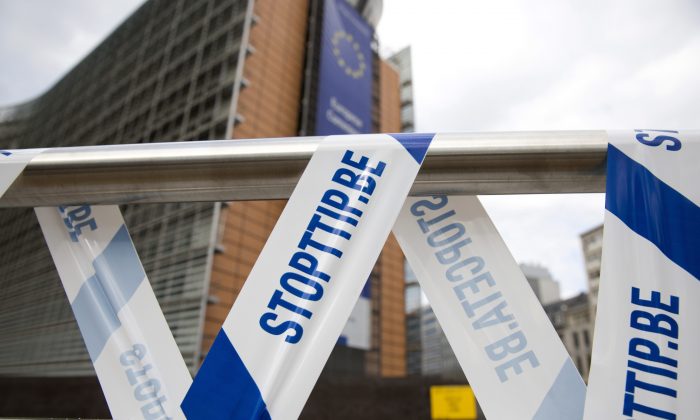 Anti-TTIP banners in front of EU headquarters prior to a demonstration against international trade agreements in Brussels on Sept. 20, 2016. The demonstration was held to protest against trade and investment deals such as TTIP and CETA. (AP Photo/Virginia Mayo)
Europe

Protesters Rally at EU Headquarters Over Planned Trade Pacts With Canada, US

BRUSSELS—Thousands of demonstrators marched at the European Union headquarters on Tuesday, Sept. 20, to protest trans-Atlantic trade talks with the United States and a planned deal with Canada, claiming they would hurt labour and consumer rights while undermining environmental protection.

Representatives of unions, social organizations, human rights, and farming groups snarled evening rush-hour traffic in the heart of the Belgian capital hoping the talks with Washington on the Transatlantic Trade and Investment Partnership (TTIP) fail to get enough European backing.

They also hope there will be enough of a groundswell of opposition to make sure that the Canada and European Union Comprehensive Economic and Trade Agreement (CETA) doesn’t get the necessary parliamentary approvals in EU member states.

Canada and the EU hope to sign the deal next month in Brussels. Though it would still need to be approved by the EU’s member countries, Canadian and EU officials have said that the vast majority of the deal—as much as 90 percent—could come into force sometime early next year.

Backers of both deals say they will be essential in boosting trade and jobs in the future. But outside the EU headquarters Tuesday, the talk was different.

“We are against these trade deals because they are a threat for the environment, for health, for labour regulations, and they give so much power to multinational corporations,” said Greenpeace Europe spokesman Mark Brady.

Well over 100,000 demonstrators had already come out in a half-dozen German cities over the weekend to press the same point.

EU trade ministers will be discussing both TTIP and CETA at their informal meeting in Bratislava on Friday, and EU Trade Commissioner Cecilia Malmstrom was hoping for strong backing for the Canadian deal, which is finished but still needs approval.

“Canada is a country that, more than most others around the world, shares our European values,” Malmstrom told the Belgian parliament Wednesday. “To put it another way, Canada is not the United States.”

Business also strongly backs the deal with Canada. Luisa Santos, Director for International Relations at the BusinessEurope federation, stressed that “CETA is not going to impose on us to eat hormone beef or hormone chicken or chlorinated chicken, these kind of things.”

The statement also acknowledged the concerns of both the German Trade Union Federation and the Canadian Labour Congress, both of which oppose the deal.

The two ministers also say they remain committed to existing environmental agreements and call for “clarification” on whether the deal sufficiently respects the rights of parties to include labour and social criteria in their procurement procedures.