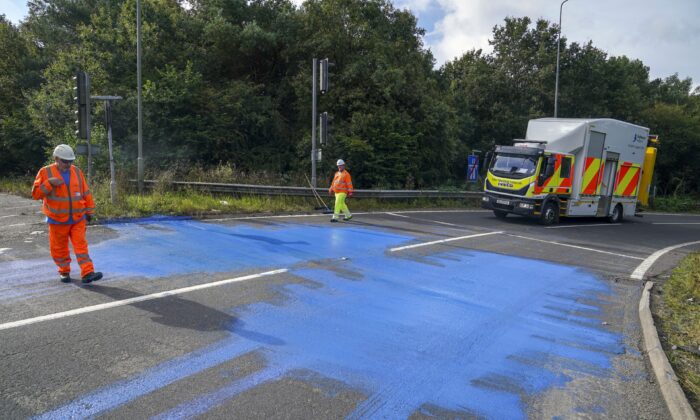 Highways England workers on the exit slip road of the M25 motorway near Leatherhead after protestors blocked the road and left paint on it, on Sept. 17, 2021. (PA)
UK

At least three junctions on the M25 were targeted on Friday morning. Surrey Police said officers had arrested 14 people at junction nine.

Insulate Britain said they demanded “credible action” from the UK government “to insulate all the homes of this country” to cut carbon emissions.

“We all agree that climate change must be tackled, but this sort of behaviour achieves nothing, puts drivers at risk, and increases pollution. I expect the police to take swift action to clear the roads,” he said on Twitter.

Insulate Britain members blocked five junctions of the M25 on Monday, leading to tens of thousands of drivers being stuck in huge queues of traffic and dozens of arrests.

The same group stopped traffic on the M25 again on Wednesday during the morning rush hour. Videos posted on social media showed angry drivers remonstrating with the activists.

Home Secretary Priti Patel said the group’s “guerrilla tactics” are “completely unacceptable” and “detract from their cause.”

“Peaceful protest is a cornerstone of our democracy and there will always be space for legitimate groups to make their voices heard,” Patel said on Thursday evening.

“But this government will not stand by and allow a small minority of selfish protesters to cause significant disruption to the lives and livelihoods of the hard-working majority,” she said.

“These actions are not only highly disruptive to those going to work and transporting vital goods, but are putting lives at risk on a busy motorway. Not to mention the resulting traffic delays will only add to vehicle emissions,” he said on Thursday.

London Metropolitan Police said on Thursday that they had arrested three people on suspicion of orchestrating the protests.

Jerry Westerman, chief superintendent with Surrey Police, appealed for witnesses who may have dashcam footage.

“I appreciate that these protests have caused considerable inconvenience and frustration for those caught up in the traffic delays and I can assure you that we are continuing to gather evidence and ensure that those who break the law are brought to justice,” he said.

“We are continuing to appeal to anyone who witnessed either incident or anyone with any dashcam footage to come forward as you may be able to help us progress our investigation.”