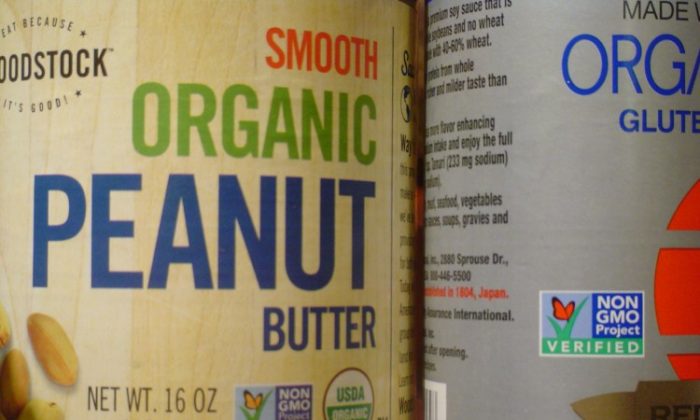 Over 70 percent of grocery store items are said to contain GMOs, but it can be hard to tell which ones. A ballot proposal in California aims to clear up the confusion. (Spencer Platt/Getty Images)
US

Ever since bioengineered crops entered the food supply, people have been calling for labels to identify them. Today, nearly 50 countries have GMO labeling laws, but efforts here in the United States have gained little ground. So far, although 19 states (and one federal bill) have sought labeling requirements, every attempt has failed.

A November California ballot initiative hopes to change the tide. Voters will decide on Proposition 37 in what could be the nation’s first identification requirement for food produced with biotechnology.

There are nine genetically engineered crops grown in the United States: corn, soybeans, canola, cotton, sugar beets, alfalfa, papaya, zucchini, and yellow crookneck squash. With over 70 percent of grocery store products said to contain GMO ingredients, there may be more in the aisles than you realize.

If Prop. 37 passes, all foods that contain GMOs could no longer claim to be “natural.” The industry calls the measure misleading, and federal regulators agree. Despite a repeated push for a label law, the U.S. Food and Drug Administration (FDA) says the evidence to support one isn’t justified.

When it comes to the question of safety, the biotech industry says that science is on their side. But the perception depends on whose research you believe.

According to Jeffrey Smith, founder of the Institute for Responsible Technology and one of the leading advocates of GMO labeling, bioengineered food may have the FDA’s blessing, but it’s not a decision based in solid science. He says that since 1991, regulators have been instructed to promote biotechnology, and it’s a mandate they’ve dutifully observed ever since.

“In reality, the overwhelming consensus among the scientists at the FDA was exactly opposite—that GMOs were dangerous and should be tested extensively,” Smith said, pointing to 44,000 internal FDA documents released in a 1999 lawsuit. “The Taylor policy lied about the science, and then Taylor became Monsanto’s vice president. Now he’s back at the FDA as the U.S. food safety czar.”

Monsanto and others say the research is flawed. In a statement, the company said it found “fundamental problems with the study design,” and noted that “critical information about how the research was conducted” was missing.

“There is no plausible mechanism for the results reported with genetically modified maize, and the results are inconsistent with an extensive body of experience and scientific study,” said Monsanto.

Several studies said to show favorable outcomes for GMO safety have also been accused of sloppy science. Smith, who has written extensively about biotech industry practices in his bestselling “Seeds of Deception,” says these companies have a history of rigging research and silencing anyone who exposes it.

Critics say Smith’s views are meritless. The Academics Review website skewered his latest book, “Genetic Roulette,” with a point-by-point rebuttal of his arguments supported with examples of peer-reviewed research. It’s a slam-dunk debunk, until you look a little closer.

Smith says that anyone who has read his book can see that Academics Review either purposefully misquoted him, or ignored his work altogether, as many of the examples they give don’t correlate at all to the things he wrote.

“If you were to read the book point-by-point in Academics Review, you would realize that they’re absolutely desperate,” said Smith.

While it’s hard to find U.S. studies that show problems with GMOs, Smith says this is by design. He says the industry often uses intimidating, shame-provoking tactics to suppress research and scare others into submission.

Despite repeated attacks to his reputation, Smith says he sorts through the data with independent scientists. Their conclusion: “The biotech industry has bad science down to a science.”

“They use the wrong detection methods, the wrong control groups, trials are too short, they overcook samples, dilute feed, etc.,” said Smith. “But when it surfaces through leaks, lawsuits, or Freedom of Information requests, the independent scientists demonstrate that it’s not sufficient for even publication in a peer-reviewed journal, and is actually specifically designed to show no effect.”

Smith says that even when effects are found, biotech scientists use ridiculous arguments to discount the statistically significant results that their own research has presented.

While no study has as yet shown problems with GMOs for humans, some say there is enough evidence to suggest that these products contribute to disease. Smith says thousands of doctors report that patients get better when they put them on non-GMO diets; and farmers from around the world say their formerly sick livestock show remarkable improvement soon after switching to non-GMO feed. Several of these examples are profiled in Smith’s recently released documentary, also titled “Genetic Roulette.”

“Correlation does not mean causation,” says Smith, “but the converging lines of evidence give physicians and others a great deal of confidence that GMOs are a major contributor to immune system disorders, digestive problems, reproductive issues, and overall health problems.”

Safe or not, the industry has every reason to resist labels—once Europe began identifying GMOs, food producers stopped using them because they had become a marketing liability.

But Prop. 37 critics say the measure will affect more than just the industry. Kathy Fairbanks, attorney and spokeswoman for the Coalition Against the Costly Food Labeling Proposition, warns that many people could lose out if it passes.

“It’s not just a labeling measure. It’s a measure that allows lawyers to file shakedown lawsuits against retailers, against food companies, and against family farmers,” she said. Nearly every California newspaper condemned Prop. 37, citing that danger.

In any case, until there’s a GMO label, existing labels can help guide the cautious consumer. In “Genetic Roulette,” Smith advises that people who wish to avoid GMOs should choose foods labeled organic or GMO-free.