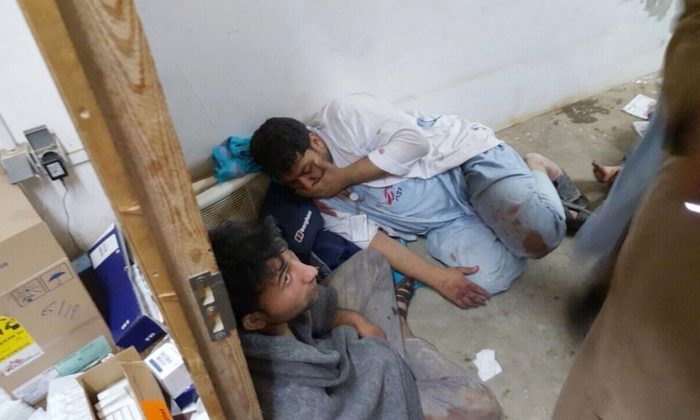 Probe Finds No Armed Men in Afghan Clinic Bombed by US

KABUL, Afghanistan—Wounded Taliban fighters were being treated in a Doctors Without Borders hospital in northern Afghanistan that was bombed by U.S. forces last month, but there were no armed men or fighting in the area at the time, the charity said Thursday, as it released the results of an internal probe into the incident.

The report by the international medical charity, known by its French acronym MSF, confirmed that U.S. forces had the exact coordinates of the clinic before launching an aerial assault on Oct. 3 that killed 30 people, including doctors and patients.

The bombing lasted for more than an hour, during which time “patients burned in their beds, medical staff were decapitated and lost limbs, and others were shot by the circling AC130 gunship while fleeing the burning building,” the report says.

President Barack Obama apologized for the attack. The U.S. military said the airstrike, requested by Afghan forces, was a mistake.

But MSF general director Christopher Stokes said “a mistake is quite hard to believe and understand.” The report, based on interviews with around 60 MSF staff, confirmed earlier accounts by the group.

MSF treats anyone wounded in armed conflict without regard to political affiliation, Stokes said. He said a “no weapons” policy was upheld at the hospital in the northern city of Kunduz.

Acting Afghan Defense Minister Masoom Stanekzai, in a recent interview with The Associated Press, said the hospital was being used as a command center for Taliban militants who seized the city on Sept. 28. The militants held Kunduz for three days before being driven back by a government counteroffensive.

At least two U.S. and NATO military investigations into the hospital bombing are underway, though it is unclear when the results will be made public.

Afghan President Ashraf Ghani has so far ordered at least two reports, but one is only focused on what led to the Taliban takeover of Kunduz, according to Western and Afghan officials familiar with its content.

The MSF report says the group received a call on Oct. 1 from a U.S. official in Washington asking if there were a “large number of Taliban ‘holed up’ in the Kunduz clinic or any other MSF locations.” Stokes said the official was with the Defense Department.

The official was told the hospital was “full of patients including wounded Taliban combatants,” the report says. Stokes said there was no subsequent contact with U.S. officials ahead of the bombing, but the call was not unusual given the fighting in Kunduz at the time.

Stokes said the official’s question “seems to suggest they believed there were a group of Taliban holed up that weren’t only patients in the hospital.”

MSF has called for an independent investigation into the bombing. Many of the people killed were women and children, as well as doctors and nurses, Stokes said.