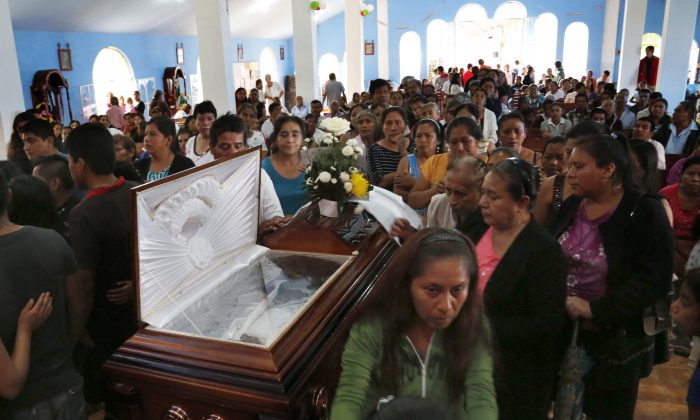 People paying their last respects on Sept. 21, 2016 to slain Rev. Jose Alfredo Suarez de la Cruz, who was found bound and shot to death alongside another priest, inside Our Lady of Asuncion Church in Paso Blanco, Veracruz state, Mexico, his hometown. In this eastern oil town already weary of rising gangland violence and extortion, the abduction and murder of two priests this week sank many residents only deeper into despair. (AP Photo/Marco Ugarte)
Americas

POZA RICA, Mexico—In this eastern Mexican oil town already weary of rising gangland violence and extortion, the abduction and murder of two priests this week sank many residents only deeper into despair.

The killings in Poza Rica, in the troubled Gulf state of Veracruz, also came at a moment of heightened tension between the Roman Catholic Church and Mexico’s government.

Church leaders are increasingly frustrated by authorities’ inability to protect their priests under President Enrique Pena Nieto’s administration, and the church is openly opposing his proposal to legalize gay marriage by encouraging the faithful to join demonstrations around the country.

“This, in combination with the recent protests of gay marriage coordinated by the church, I think we’re seeing a new low point in the relationship between the church and the PRI,” said Andrew Chesnut, chairman of Catholic studies at Virginia Commonwealth University, referring to Pena Nieto’s ruling Institutional Revolutionary Party. “I think the overarching picture is that … the open-season on priests has just proliferated with the intensification of the drug war.”

When Alejo Nabor Jimenez and Alfredo Suarez de la Cruz were found bound and shot to death outside Poza Rica on Monday, it brought to 14 the number of priests slain in Mexico since Pena Nieto took office in late 2012. At least 30 have been killed since 2006. And on Thursday church officials made a public plea for the life of yet another priest, who was reportedly kidnapped from his parish residence in the western state of Michoacan and has not been heard from since.

What exactly happened to Nabor and Suarez, and why, remains murky. Investigators have interviewed their driver who was abducted alongside them and escaped, but he has not spoken publicly.

Veracruz state prosecutor Luis Angel Bravo cited robbery as the apparent motive and said the priests had been drinking with their killers before they were abducted. That allegation infuriated the church, which saw it as the latest example of state authorities smearing victims in cursory-at-best investigations.

Bravo dismissed suggestions that a drug cartel may have been involved, although the Zetas and the Jalisco New Generation gangs are battling for control in Veracruz, including in Poza Rica.

Locals have gotten accustomed to hearing about grisly murders. The city of 195,000, has recorded 41 killings in the first eight months of this year — more than three times the toll for all 2015.

Only this time it wasn’t faceless strangers assumed to be cartel operatives, they were priests, respected community leaders.

“In the newspaper there are two or three dead every day,” said a man who runs a business with a clear view of Our Lady of Fatima church, where the priests lived. “Usually you say, ‘if they killed them, it was for a reason.'”

Like many people interviewed by The Associated Press in Poza Rica, the man spoke on condition of anonymity for fear that speaking openly could make him a target for violence.

Ministering to an increasingly terrified flock, people say, Nabor threw open the doors of his church after taking up the post six years ago. Those who knew him say he was close to the congregation, sharing his phone number widely and urging people to drop in at any time.

Even at age 50, the senior priest was fond of encouraging parishioners to “seek me out at any hour you want — for me there is no rest,” church secretary Juan Carlos Garcia said.

The 30-year-old Suarez was a fresh face in town. He arrived just a month earlier to replace another priest who died this year of natural causes, and had taken over the church’s youth programs.

Friends and parishioners were outraged by the suggestion that the priests had been partying with their killers and expressed deep skepticism about the credibility of the investigation so far.

At Suarez’s funeral, Rev. Lorenzo Rivas, who attended seminary with the young priest, said his only vice was volleyball.

“He was not a person who liked alcohol,” Rivas said.

Bravo, the prosecutor, later appeared to walk back his comments somewhat, saying he did not mean to criminalize the victims.

Also at the funeral, one woman slipped a note to a reporter urging an investigation of what she called unspecified government persecution of bishops in Veracruz for opposing the gay marriage proposal.

Veracruz has been governed for decades by Pena Nieto’s party, and current Gov. Javier Duarte is widely reviled for alleged corruption and for crime rates that have spiked on his watch.

The wary relationship between church and state in Mexico dates back to severe restrictions placed on the church and confiscation of its properties in the 19th and early 20th centuries when the government pushed secularization fearing the church’s influence on society. Its political marginalization allowed the PRI to concentrate its political power and hold the presidency uninterrupted for 71 years.

The day the priests disappeared in Poza Rica began normally. Nabor visited other churches before returning to Our Lady of Fatima for the 6:30 p.m. Mass.

As Sunday evening wore on, longtime caretaker Jorge Juarez Bautista said, only Nabor, Suarez and the driver remained. A homeless woman who sometimes helps around the church said she saw several young men and a woman in front of the building around 8:20 p.m., and the woman told her they were waiting for Nabor.

The elder priest was on the phone when Juarez left at 9:30 p.m., wrapping a chain around the gate but not locking it. That was the way Nabor wanted it; he sometimes misplaced his keys, so some time ago he told Juarez to stop locking up.

About an hour later Juarez passed by again and noticed the gate was not how he left it, but he didn’t think anything of it since it was not unusual for people to visit even at night.

At 5:30 a.m., Juarez returned to find the gate wide open and the two vehicles parked inside the compound gone. Two hours later another worker arrived and called Nabor’s cell phone, but there was no answer. They entered the priest’s apartment and found it in disarray: His glasses were lying on the floor in the sacristy, church offerings had been taken and there was blood.

By early afternoon the bodies were located along a little-used road outside town. Nabor had been shot nine times.

Several days later a woman reflected on the killings, sitting inside the business she runs just up the road from the church. Things used to be quiet in Poza Rica, the woman said, and folks never thought twice about going out at night. Now streets are all but empty after dark. She’s already shortened her hours, and is thinking of shuttering it for good after just six months in business.

The priests’ murders hit hard because of their positions in the community, she said, but everyone fears they could be next: “Really, we’re all exposed to having something happen to us.”