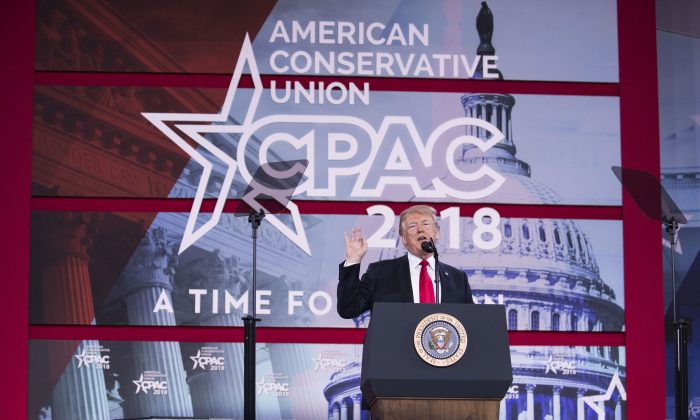 Having been in office just over a year, President Donald Trump addressed the Conservative Political Action Conference (CPAC) on Feb. 23, talking about his administration’s achievements as well as the values that make America great.

Trump praised the tax bill passed by Congress in December, the extensive deregulation under his administration, and the record low unemployment numbers among Blacks and Hispanics.

He also praised the recent revival of American energy production, which allow the United States to be more competitive with other countries.

Other signs of improvement in the economy are the fact that major corporations, including Apple, are reinvesting their money in the United States, and, in some cases, moving factories back from overseas.

“When did you hear about car companies coming back into Michigan and into Ohio. When did you hear? You heard about them leaving,” Trumps said in his remarks, many of which were unscripted and met with repeated standing ovations.

The president also highlighted the significance of the increase in military spending to $700 billion.

“If we don’t have a strong military, you might not be allowed into this room someday,” Trump said.

“We better take care of our military. They are the greatest people.”

But beyond the achievements of his young administration, Trump talked about the values that make America what it is.

“All of us here today are united by the same timeless values,” Trump said in his speech.

He also talked about the importance of these values being passed on to the next generation.

“We celebrate our history and our heroes and we believe young Americans should be taught to love their country and to respect its traditions.”

“We salute our great American flag, we put our hands on our hearts for the pledge of allegiance, and we all proudly stand for the national anthem.”

He also talked about the importance of faith as the cornerstone of American society.

“Above else, we know that faith and family, not government and bureaucracy, are at the center of American life—we know that,” he said.

“Because in America we don’t worship government, we worship God.”