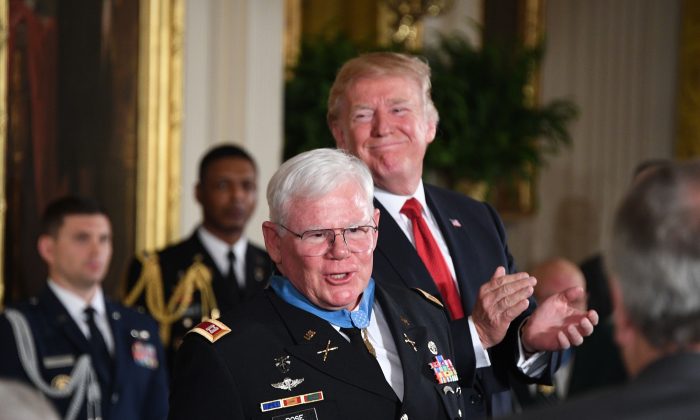 President Donald Trump claps after presenting the Medal of Honor to retired U.S. Army Capt. Gary Michael Rose for his actions during the Vietnam War, on Oct. 23, 2017.
US News

President Donald Trump has awarded the United States’ highest award for valor, the Medal of Honor, to Capt. Gary Michael Rose, who risked his own life to save others during the Vietnam War.

“For many years, the story of Mike’s heroism has gone untold. But today, we gather to tell the world of his valor and proudly present him with our nation’s highest military honor,” Trump said during a ceremony on Oct. 23.

Rose was born in Watertown, New York, and was taught by his father, a metalworker and World War II veteran, that he should always love, cherish, and defend his country.

He enlisted in the Army after his first year in college. At age 22, Rose was a medic for the 5th Special Forces Group in the Vietnam War.

Trump recalled the harrowing mission during which Rose performed his heroic acts. Rose was the only medic for 136 men who were deployed on Operation Tailwind in Laos. Their mission was to prevent the North Vietnamese from funneling weapons along the Ho Chi Minh Trail to use against American troops.

The Vietnamese were well-armed and numerically superior to the U.S. special forces deployed. The U.S. troops were continuously engaged during the four days, and were hit by B-40 rockets and mortar rounds, as well as machine gun fire.

In one instance, Rose braved the hail of bullets and sprinted to a wounded soldier’s side, using his own body to protect him. He then carried the soldier through the bullet-ridden combat zone to a safer area.

This was only one instance of many in which Rose risked his own life and exposed himself to enemy gunfire so that he could reach wounded soldiers to administer saving aid.

At one point, Rose was knocked down and injured in his head, hand, and foot, when an enemy B-40 rocket exploded just feet away from him.

Rose ignored his own wounds and continued to provide aid to other injured soldiers.

After extraction helicopters arrived, Rose helped to put the wounded on the first set of helicopters, and then returned, while under fire from enemy soldiers, to move more wounded soldiers.

When the last extraction helicopter arrived, the gunner was shot in the neck. Rose administered critical medical treatment to him aboard the helicopter, thus saving his life.

The helicopter crashed just a few hundred yards from the extraction point, injuring Rose and the others aboard.

Despite his multiple sustained wounds, Rose continued to pull out other wounded troops, some of whom were unconscious, from the burning wreckage, and administer aid.

“Finally, another helicopter rescued them, and by the time they reached the base, Mike was covered in blood. He refused treatment until all of his men had been cared for first,” Trump said.

“Nations are formed out of the strength and patriotism that lives in the hearts of our heroes,” he said.

Rose was joined by 10 members of his unit attending the Medal of Honor ceremony.

After Operation Tailwind, Rose continued to serve in the Army as an officer for over 20 years.

Rose seems to exemplify the focus Trump has placed on patriotism throughout his time in office.

In his inaugural address, Trump said, “At the bedrock of our politics will be a total allegiance to the United States of America, and through our loyalty to our country, we will rediscover our loyalty to each other.”

At the White House ceremony, Trump said Rose lives by a core conviction: that you serve your country by fixing your block or fixing your neighborhood.

“Mike volunteers with the American Legion, the Knights of Columbus, and many other organizations. He volunteers at a local soup kitchen, fixes broken appliances for elderly and disabled neighbors, donates his hair for those suffering from cancer, makes lunches for children in need, and organizes community gatherings to bring people closer together—which is something we need all over the world and certainly in our country,” he said.