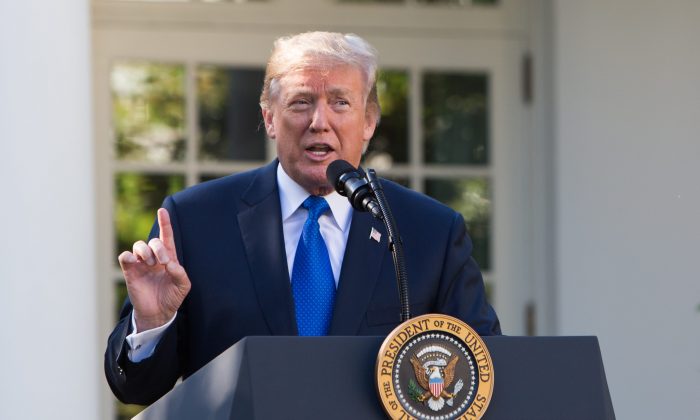 President Donald Trump announces Jerome Powell as the new chairman of the U.S. Federal Reserve in the Rose Garden of the White House in Washington on Nov. 2, 2017. (Samira Bouaou/ The Epoch Times)
Asia & Pacific

“I think they’re great people. They’re industrious. They’re warm, much warmer than the world really knows or understands,” Trump said aboard Air Force One en route to Japan on Nov. 4.

Trump is currently on a 12-day tour of Asia. One of the main goals of the trip is to gain support from countries in the region to deal with the North Korean problem.

“I hope it all works out for everybody. It will be a wonderful thing if we can work out for those great people, and for everybody,” Trump said.

Generations of North Koreans have suffered under the communist dictatorship in North Korea. The Kim regime started in 1948 when Kim Il Sung was installed as the leader of North Korea’s communist party.

Kim had been trained by the Soviet Union’s red army and had initially been installed in the leadership of the Korean Workers’ Party in 1946.

Millions have died as a result of multiple famines in North Korea. To date, most North Koreans live in abject poverty with no or limited access to basic necessities such as electricity.

During the United Nations General Assembly in New York on Sept. 19, President Trump said that while the United States has great strength and patience, it would not hesitate to “totally destroy” North Korea if needed.

The regime in Pyongyang has escalated its threats of using nuclear weapons against the U.S. mainland and its allies in the region. In early September it conducted a highly controversial underground nuclear test.

So far, North Korea has refused to engage in talks about abandoning its nuclear weapons program.

Its state-controlled media have issued multiple threats in recent months that its state-sanctioned nuclear program is now near conclusion. CIA Director Mike Pompeo said last month that North Korea is now in the final stages of being able to launch a nuclear warhead on a ballistic missile.

Trump has frequently criticized previous U.S. administrations for not having handled the North Korean nuclear threat.

National Security Adviser H. R. McMaster told reporters at the White House last week that time is running out for a diplomatic solution to the situation. He has said previously that the Trump administration demands North Korea denuclearize.

A senior White House official said that the first goal of the Asia trip is to “strengthen international resolve to denuclearize North Korea.”

The second is to promote a free and open Indo-Pacific region, and the Third, according to the official, is to advance America’s prosperity.

Trump’s visit to China will be especially important in solving the North Korean situation. North Korea is estimated to depend on China for as much as 90 percent of its trade.

While China has implemented U.N. sanctions that were imposed in September, and has put more pressure on North Korea’s finances and businesses, the Trump administration believes they can do much more.

As a fellow communist nation, North Korea has depended on China for years.

“The President is very much focused on China as the leading trading country, or the leading trading partner of North Korea. He is very much focused on making sure that China lives up to all the obligations under the U.N. Security Council resolutions, but also to do more than that, to go further,” the senior White House official said in a background briefing.

The official also said that Trump would meet with Russian President Vladimir Putin on the sidelines of the APEC summit to discuss the North Korean situation.

During his visit to Japan, Trump met with one person who was abducted by North Korea as well as family members of Japanese citizens who were also abducted by the regime and have not returned.