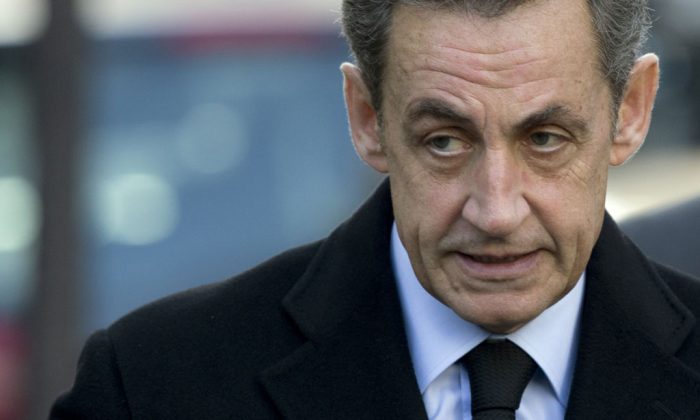 Former French president and candidate for the presidency of French right-wing main opposition party UMP Nicolas Sarkozy arrives to vote for the first round of the election, on Nov. 29, 2014, in Paris. (Kenzo Tribouillard/AFP/Getty Images)
Europe

PARIS—As political encores go, former President Nicolas Sarkozy didn’t quite get the warm embrace from his party that many French had expected in his return to public life on Saturday.

The hard-charging Gaullist who once made headlines for reviving France’s U.S. ties, helping depose Libyan leader Moammar Gadhafi and marrying a former supermodel while in office won a race for leader of France’s main conservative party — but with a margin of victory that was smaller than many had predicted.

Sarkozy’s victory as chief of the Union for a Popular Movement, or UMP, was a crucial first step on his road to a far bigger prize: He hopes to return to the Elysee Palace in the 2017 presidential election — five years after he failed in his re-election bid against Socialist Francois Hollande and cast himself into political exile.

But with no victory speech, a few sober lines on Twitter, and a subdued “Of course, I am happy” into a TV reporter’s microphone, Sarkozy’s gestures suggested the man known for big, flashy displays was somewhat chastened by a result that caps his return of several months to the political arena.

Meanwhile, Bruno Le Maire, a former government minister, beamed broadly at his own post-election rally and proclaimed, “Tonight, I am happy” after collecting nearly 30 percent of the vote, behind Sarkozy’s 64.5 percent. Herve Mariton, a social conservative, trailed far behind in third with around six percent.

Sarkozy’s showing was well below his performance in the 2004 UMP leadership contest when he won with 85 percent. He used the party leadership then has a springboard for the presidency, building a ground game that helped propel him into the Elysee Palace.

Nearly 270,000 dues-paying party members were eligible to vote. The online system used came under an “organized” cyber-attack that temporarily slowed down voting, UMP secretary-general Luc Chatel told France-Info radio. He said the party was filing legal action against the unidentified hackers behind the attack, and that police were investigating.

Many analysts expected Sarkozy needed at least 70 percent in the leadership contest to reap full political momentum out of the vote. As former president, Sarkozy simply outgunned his rivals in star power.

Above all, the result shows that Sarkozy, at 59, isn’t as inspiring as he once was within the party that he once dominated — culminating with his presidential term from 2007 to 2012. He has shown recent vulnerabilities and has been facing legal troubles that have diminished his status as the darling of the mainstream right.

The UMP will choose its presidential nominee in two years. Sarkozy appears likely to face at least two rivals in 2016: his own prime minister, Francois Fillon, and Alain Juppe, another former premier who was a longtime ally and protege of President Jacques Chirac. The two — both seen as more centrist and even-tempered than the explosive Sarkozy — were not vying for the party leadership.

Conservatives are sharpening their political knives for the 2017 race. Polls show Hollande is the least-popular French leader in modern history, largely for failed promises to bring down France’s double-digit unemployment rate.

But the UMP has had its own troubles. Saturday’s vote was necessary because the previous party chief, Jean-Francois Cope, resigned this summer in a scandal involving party funds. Before that, Cope had won the party leadership by a razor-thin margin that sparked a particularly nasty bout of intra-party bickering.

In remarks on his Twitter account after his victory, Sarkozy called for party unity, credited his rivals for a “dignified” campaign, and thanked party electors for providing “the best answer to two years of internal quarreling and division.” He smiled and shook a few hands as he left his campaign headquarters, but made few public comments.

The UMP will also face the newest force in French politics: The far-right National Front party, which has gained momentum amid a lackluster economy and has fanned fears about immigration. Sarkozy, a former interior minister, used a tough-on-crime image to siphon support from the far-right ahead of his previous presidential win.

Political scientist Thomas Guenole said any score under the 70-percent bar would signal “failure” for Sarkozy. I-Tele television commentator Mickael Darmon said that while Sarkozy did capture the party leadership, “politically, he was not the winner tonight,” Le Maire was.