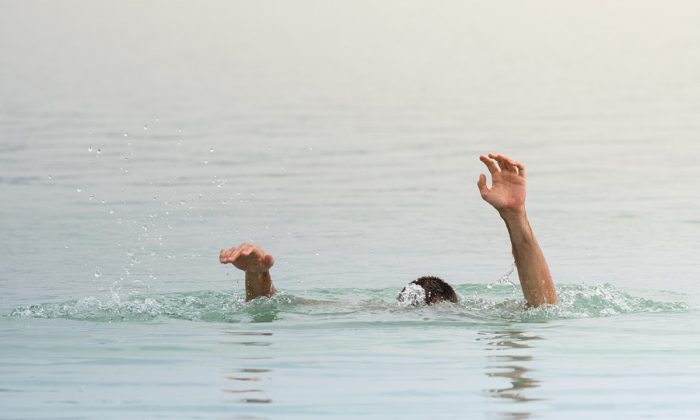 A file image shows a man submerged. (Suetot/Pixabay)
US News

After fate guided her to a Minnesota lake on a Sunday, when she would usually be in church, a former lifeguard saved a drowning boy in her first-ever rescue—at 33 weeks pregnant.

Mother-of-two Stephanie Swedberg had decided to head down to Crystal Beach Park in Burnsville on July 21, to help her 3-year-old twins learn to float—hoping to protect them from drowning—reported Fox 9.

But it was one of the boys playing nearby in the water—aged between 10 and 14—who needed her life-saving expertise.

“I didn’t really realize anything was off until I saw one of the moms fully dressed, sprinting into the water and screaming for somebody to help her son. Then I looked over and I saw one of the boys unable to keep his head above the water,” Swedberg told Fox 9.

Sunday morning, a young boy started struggling in the water at Crystal Beach Park. When his mother screamed for help, another mother – 33 weeks pregnant – heard her calls.

She swam out and rescued him.

According to the news station, as a woman of faith Swedberg believes she was there for a reason, saying she would normally be in church, but had decided to watch the service online instead.

The incident happened quietly. “He wasn’t screaming… he was just thrashing around,” Swedberg told Fox 9.

Despite being a life-or-death situation, whilst they may spark screams and shouts from witnesses, drownings are often silent, as the victim fights for air, with no breath or opportunity to cry out.

Last month, a Texas mother whose 7-year-old son drowned within arms reach recalled how he slipped under the water unnoticed—as a warning to other parents.

“There’s no splashing, no yelling for help,” wrote Holian in an emotional Facebook post. “Nothing about drowning will catch your attention until it’s too late.”

Next week will be 3 years since we held him. So, allow me a few minutes of your time to talk about water safety. Nothing…

She was able to revive her son with CPR before EMS arrived, but on the ambulance ride to the hospital, Holian said medics intubated and sedated him “as a precaution”—he never woke up.

Holian said she was standing just three feet away, telling other kids to be careful in the water, while her son stood on the pool step.

They waited for three days, praying for a miracle.

“I was prepared to wait for the rest of my life. But he had lost all brain function.”

The Needville, Texas, mother said that it breaks her heart every time she hears of a child drowning.

“Whatever you’ve seen on TV, just forget,” she wrote. “It doesn’t happen that way. We have been conditioned to look for certain distress signals that just won’t happen.”

“Drowning happens under water. You can’t yell for help under water and you can’t splash below the surface.

Most Common Cause of Child Death

Of the 3,786 drownings in 2016, more than 12 percent were children age 4 and younger, according to the National Safety Council. Bathtubs, toilets, and even buckets also can pose a danger for very young children.