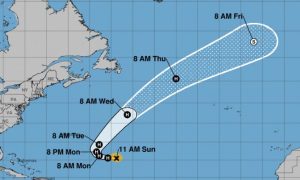 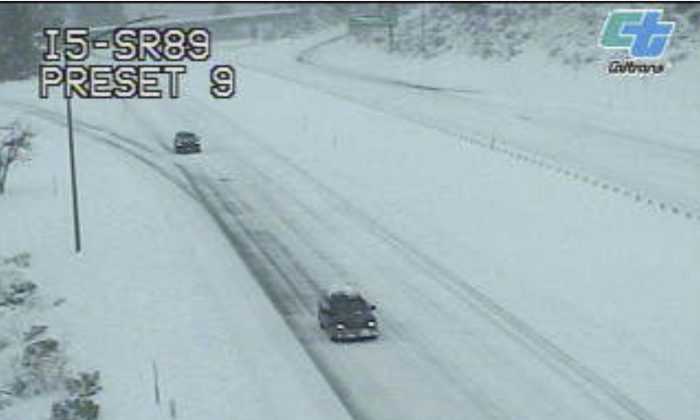 This image from a Caltrans traffic camera shows snow on Interstate 5 in Weed, Calif., on Feb. 13, 2019. (Caltrans via AP)
US News

Powerful Storm Dumps More Rain and Snow Across the West

The system known as an atmospheric river snaked through southern Oregon, Northern California and western Nevada while feeding on a deep plume of moisture stretching across the Pacific Ocean to near Hawaii, the National Weather Service said.

The tempest followed more than a week of severe weather in the Pacific Northwest and was the latest in a series that has all but eliminated drought-level dryness in California this winter.

@NWSBayArea This is what I am seeing that appears to show the storm moving east below San Francisco to San Diego. pic.twitter.com/XT0eyLAQWS

Mandatory evacuations were in effect for areas near a burn scar in the Santa Ana Mountains southeast of Los Angeles where officials said the risk of debris flows was high.

Tim Suber said he has lost count of how many times his hillside neighborhood in Lake Elsinore has been evacuated between last summer’s devastating wildfire and this winter’s succession of storms.

“I’m not going this time,” Suber said Wednesday after Riverside County sheriff’s deputies warned him that he could end up trapped if roads flood. “I’ve got 35 chickens and a daughter who won’t leave them behind. So we’re staying.”

The real estate agent said he’s confident culverts and washes in the area will handle any runoff after crews removed dozens of truckloads of dirt following the last storm. But just in case, “my car is gassed up and ready to go at a moment’s notice,” said Suber, 54.

Winter storm warnings were posted in the snow-laden Sierra Nevada, where the forecast said up to 7 feet of new snow could be dumped at elevations above 9,000 feet.

A backcountry avalanche warning was issued throughout the Sierra.

“We are still trying to dig out of the last system, and we have another big storm here,” said Kevin “Coop” Cooper, spokesman for Kirkwood Mountain Resort south of Lake Tahoe.

Five passengers suffered minor injuries when a Delta Air Lines flight headed from Southern California to Seattle encountered severe turbulence in the storm and was forced to make an emergency landing in Reno. Photos on social media showed a drinks cart upended and snacks and soda cans littering the aisle. One passenger tweeted the plane did two nose dives in “crazy turbulence” but the crew “handled it perfectly.”

All those tire icons on https://t.co/YKR3epTynb are chain control areas all across California. Expect difficult winter driving conditions and delays if driving in the Sierra. pic.twitter.com/Dmn0UR0e0t

A local state of emergency was declared in Shasta County because of significant storm damage, a Sheriff’s Office statement said. Redding, the county seat, turned its library into a warming center.

Widespread roadway flooding occurred north of San Francisco Bay. To the east, a swath of California’s Central Valley was under a flood warning.

In the Fresno County city of Sanger, police posted social media photos of wind damage to the roof of a school along with snapped trees.

Further south in Santa Barbara County, which was hard-hit by a devastating debris flow in January 2018, officials predicted rainfall rates were below thresholds for new flows, but residents were still advised to stay alert.

In Washington, thousands of Puget Sound Energy customers lost power, and Interstate 90 was closed for a second day Wednesday across Snoqualmie Pass in the Cascade Mountains. The town of North Bend declared a state of emergency because of several feet of snow.

In Oregon, transportation officials closed about 20 miles of the westbound lanes of Interstate 84 in the Columbia River Gorge east of Portland because of icy conditions that caused numerous wrecks and stranded drivers for hours.

Authorities brought stranded travelers water and food and tried to get gas to vehicles that needed it.

The most recent Sierra snowpack survey taken on Jan. 31 was 100 percent of normal to date. More snow has fallen since.

In the Eastern Sierra, the Mammoth Mountain resort reported the latest storm had already added 8 inches to its summit season total, which is nearing 38 feet.

Mammoth said it planned to keep its slopes open to skiing and boarding through the Fourth of July, at least.