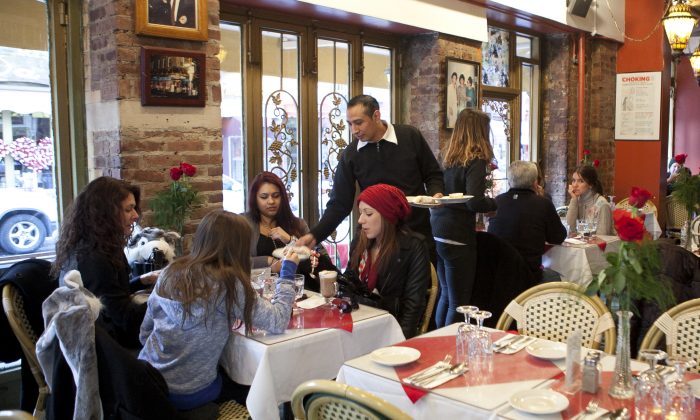 A waiter attends to customers at a restaurant in Manhattan, New York, on Feb. 17, 2014. (Samira Bouaou/Epoch Times)
New York

Possible Impacts of the Minimum Wage Hike in New York

NEW YORK—About a million New Yorkers should have a little more cash in their pockets. On Jan. 1, the minimum wage increased from $9 to $11 per hour in New York City and at least $9.70 statewide.

Social advocates applaud the move, arguing any job should pay a “living wage”—one that supports food, shelter, health care, and other necessities. Yet the most impacted industries worry, as the wage hike adds to an already large pile of recent financial pressures.

Critics argue the hike will end up costing the state hundreds of thousands of jobs due to layoffs.

In general, strengthening minimum wage laws signifies an increase in government control over employers’ and employees’ ability to negotiate wages.

Cuomo offered a two-pronged reason for the wage hike.

First, the federal minimum wage ($7.25) guarantees about $15,000 a year for a full-time employee working 8-hour days. That’s enough to clear the federal poverty threshold of $12,000 for a single worker, but not for a single parent.

And second, Cuomo said the minimum wage of $15 reasonably reflects the New York state minimum wage seen in 1970, adjusted for inflation and cost of living. It provides an income of some $30,000, which allows a single mother of four to live above the federal poverty line.

Cuomo’s report said 40 percent of people with minimum-wage jobs have a spouse or children, or both. Such jobs are not just for “high school students earning weekend pocket money,” the report states.

The rationale then is that every job should allow for maintaining a family—even entry-level jobs, like a dishwasher at a restaurant.

It’s hard to calculate the impact of the increase on workers, as there are 18 minimum wage levels set for different workers in different parts of the state.

Restaurant workers, including fast food, benefit the most. By the time the minimum wage scales up to $15, almost 80 percent of restaurant workers will have received a raise, according to a study co-authored by Professor Michael Reich at the University of California, Berkeley.

Reich’s calculation includes workers in more senior positions, who already make $15 an hour or more, but will still get a raise as the wages of their junior colleagues increase.

The majority of workers in grocery stores, agriculture, child care, and other personal services can also expect a raise.

Workers would also be eligible for less welfare, reducing the tax burden.

Another group of beneficiaries is cheats. Those who pay workers off the books will benefit from the minimum wage hike, as they can undercut competition by an increasing margin.

The restaurant industry is the most widely impacted by the wage hike, especially in New York City, where the increase is the highest.

This has business owners worried, as it adds to a lineup of recent financial pressures, including drastic rent increases, health insurance premium increases, and the 2014 introduction of paid sick leave.

None of the challenges seriously wound the industry on their own, but they add up, he said. “It’s death by a thousand cuts.”

Restaurants will likely pass on cost increases to consumers.

But, Rigie said, “there is a limit on how much the consumer is willing to pay for a burger or a bowl of pasta.”

When prices go too high, people buy less, which leads to businesses laying off staff.

Also, when workers cost more, businesses find ways to replace them with technology. Some restaurants are already switching from a full service model to fast casual to reduce the real estate footprint and hire fewer workers, Rigie said.

Reich believes any job losses will be offset by income increases for poorer people. A minimum wage increase generally takes money from richer people and gives it to poorer people.

Economists have found that with a pay raise, poorer people will spend more of the extra income than richer people. That’s why increasing the minimum wage should generate sales and thus jobs.

Reich predicts the state will end up with slightly more jobs thanks to the wage hikes. But he also said his analysis didn’t include the cumulative effect of the additional recent challenges businesses in the city face.

On the other hand, American Action Forum, a conservative-leaning think tank, predicts a $15 minimum wage will eventually cost the state 200,000 to 588,800 jobs.

Rigie doesn’t believe the current challenges will decimate the city’s restaurant scene, but restaurants might close at a faster pace.

Still, the current challenges are unprecedented and thus hard to gauge.

“We haven’t seen so many mandated increases imposed over such a short period of time,” Rigie said. “We’re entering uncharted territory.”