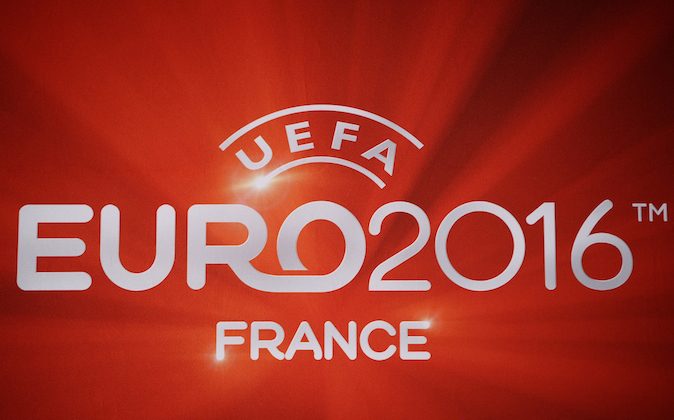 Picture taken on October 23, 2012 in Paris shows the logo of the Euro 2016 football tournament at the FFF headquarters in Paris. (LIONEL BONAVENTURE/AFP/Getty Images)
Europe

Portugal and Albania are set to play against each other in a Euro 2016 qualifier on Sunday, September 7.

The game will be broadcast on RTP 1 in Portugal, as well as SuperSport 2 Digitalb in Albania.

Portugal are 2/7 to win the match, as compared to 12/1 for Albania, according to OddsChecker.

BERLIN—World Cup winner Germany opens its 2016 European Championship qualification campaign against Scotland in Dortmund on Sunday, hopeful of taking the first step toward back-to-back titles. Scotland is arguably fighting it out with Poland and Ireland for second place in Group D, though third place would also leave open the prospect of qualification, most likely through a playoff. Ireland plays Georgia in Tbilisi and Gibraltar hosts Poland at the Algarve stadium in Portugal, also Sunday. Here are five things to know about the group:

Only France and Spain have won a European Championship as reigning World Cup winners, in 2000 and 2012, respectively. Germany is in a good position to repeat that feat, despite the retirements of World Cup-winning captain Philipp Lahm, fellow defender Per Mertesacker and record goal-scorer Miroslav Klose.

Coach Joachim Loew has always made a point of bringing in new players. He handed out 72 debuts in 113 games since he took over in August 2006, so transition should not be a problem.

Germany boasts a wealth of young talents pushing established internationals for their places. World Cup hero Mario Goetze is yet to nail down a starting position, Andre Schuerrle has grown used to a substitute role, and Borussia Moenchengladbach midfielder Christoph Kramer has already impressed in a short time.

Loew’s greatest challenge is molding the talent at his dispersal into a cohesive unit. He’s got two years to get it right again.

Germany’s squad has been hit hard by injuries, compounding the loss of the retired Lahm, Mertesacker and Klose.

Loew called up attacking midfielder Sidney Sam on Thursday, in place of Schalke teammate Julian Draxler, who strained his right thigh in Germany’s 4-2 friendly loss to Argentina on Wednesday.

Thomas Mueller was rested against Argentina and is likely to start on Sunday, and Goetze should be fresh after a substitute role on Wednesday.

Mertesacker described Argentina’s 4-2 win over Germany in Wednesday’s friendly as a “wake-up call” and Loew’s side will be fully focused and determined to atone with a win against Scotland.

Striker Mario Gomez, who missed three clear chances against Argentina before being jeered by the home fans, will have another chance to win back their trust. Gomez has 25 goals in 60 appearances for Germany but missed the World Cup due to fitness concerns after a long injury layoff.

“Mario had a tough time after his injury and missing out on the World Cup,” Marco Reus said on Friday. “He knows what he can do, we know what he can do and the goals will come by themselves at some stage.”

Reus also missed the World Cup, due to a foot injury sustained just before the tournament, but the Borussia Dortmund attacking midfielder is gradually getting back to his best.

“The most important thing is that I feel well. I was delighted to be back,” said Reus, who is counting on vocal support in his hometown stadium. “I’m happy the qualifier is in Dortmund.”

Scotland has not been involved at a major tournament since the 1998 World Cup in France. The country’s record against Germany is good, though, with four wins and five draws from 15 games.

However, the Germans have yet to lose in six competitive games to the Scots. Two of those were draws played in Glasgow.

“The Germans come alive when it becomes competitive,” said Scotland coach Gordon Strachan, who enjoyed the Germany-Argentina friendly but is braced for a backlash.

“It was a wonderful game to watch from a neutral’s point of view but we didn’t take anything from it,” Strachan said. “When the Germans have to compete, they’re a different animal. I can’t remember the last time they didn’t qualify for anything.”

With 24 sides competing at Euro 2016 in France, qualifying is theoretically easier. The second-place finishers in each group all qualify automatically, as does the best third-place side from the nine groups. The other eight third-place teams can qualify through playoffs.

Scotland, Poland and Ireland would be content with second place, possibly even third, from Group D, which is completed by Georgia and Gibraltar.

Poland finished bottom of its group at both Euro 2008 and Euro 2012. Hopes are pinned on captain Jakub Blaszczykowski and former Borussia Dortmund teammate Robert Lewandowski to lead the side further this time around.