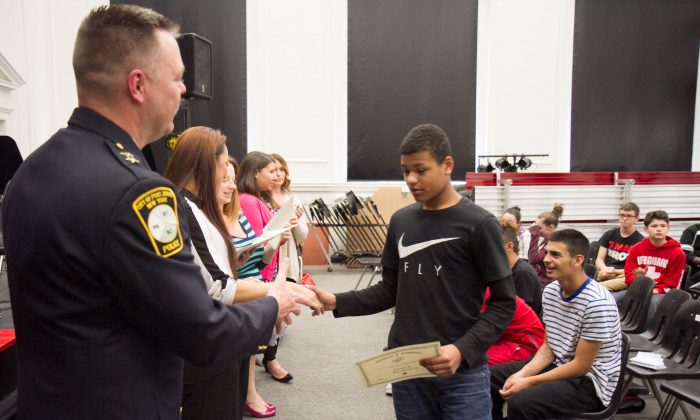 Port Jervis 8th grader Paul Garnere receiving his certificate of completion from the Too Good for Drugs Program at Port Jervis Middle School on May 2, 2016. (Holly Kellum/Epoch Times)
New York

PORT JERVIS—Ninety-eight of almost 200 eighth graders at Port Jervis Middle School received their certificates of completion for the Too Good for Drugs program on May 2, the second group of eighth graders and the first class in the school to graduate from the course.

The program teaches youth about healthy relationships, peer pressure, responsible decision-making,  and the negative impact drugs, alcohol, and tobacco have on their body and life.

The 10-week course was a collaboration between Catholic Charities, the Alcohol & Drug Abuse Council (ADAC), and the Port Jervis Police Department which are all part of the City’s anti-drug coalition Operation P.J. Pride.

Port Jervis has been caught in the rising tide of heroin use that has swept the nation, said Police Chief William Worden, and said the students can play a big role in changing that trend.

“I look at you as all leaders,” he told them. “I’m hoping this will spark a conversation with your generation so that we can overcome these problems, not only for your school but for your community.”

Port Jervis Patrol Officer Nicole McGowan and ADAC Prevention Counselor Lauren Savino taught the class, both this semester and last, and plan to do it again next year, with the addition of the seventh grade as well.

They said all the students did better on the post-test than the pre-test, but “prevention is pretty hard to measure because we really only hear about the ones that don’t succeed or don’t make the right choices,” Savino said.

McGowan said because drugs are not as a big a problem at the middle school age, “it’s more about building a relationship with them so that when they do go to high school, you can know them from a different angle rather than just being a police officer.”

The program was developed by the Mendez Foundation, which was started in 1967 by a Florida businessman and philanthropist to help underprivileged children in the Tampa area. It has K-12 curriculums “Too Good For Drugs” and “Too Good for Violence,” that claim to be evidence-based.

I’m hoping this will spark a conversation with your generation.
— William Worden, Port Jervis Police Chief

Two studies of the “Too Good for Drugs” curriculum showed positive results for middle school students but no statistically significant impact for elementary school students.

The 2013 test showed an impact on students’ use of and resiliency to alcohol, tobacco, and drugs. The 2000 study showed similar results on the test immediately following the program but those impacts faded by the 20-week follow-up survey.

The National Institute of Justice’s CrimeSolutions.gov rates it as a “promising” program on a scale of “effective,” “promising,” and “no effect.”

Travis Conklin, one of the recent graduates of the program, said it was “very educational” but that it did not change his mind about drugs and alcohol. He said his experience with a close family member who did drugs was enough to deter him from using them himself.

Students Freddy Blue and Howard Spangenberg said the course was educational, and when asked if they thought it would help them resist peer pressure to do drugs, they said it would. Spangenberg said he had friends who did drugs and “that’s why I don’t hang out with them.”

After last year’s program finished, the adults wanted to hear from the students what their experiences were with drugs, and started something like a focus group with 18 interested students.

The focus group was so successful, said ADAC prevention coordinator MaryAlice Presto, that the students wanted to continue it and do some anti-drug projects as well.

They helped put up posters around the school for the national, anti-tobacco Kick Butts Day on March 15 and are planning to help Operation P.J. pride with a sticker campaign on pizza boxes. The stickers are part of a social norming campaign the coalition is using to show just how low the use of marijuana in the community really is.

“We hear so much about all the drug use and the different things going on,” said Dawn Wilkin from Catholic Charities and a member of the Operation P.J. Pride steering committee. “So it’s a way to break that perception, especially with the kids, that not everybody’s doing it. This is the reality.”